The book has an introduction, eight chapters, and a conclusion. In chapter one, it is noted that Kemalism has constituted a road block to the flourishing of leftist politics as a mainstream political movement in Turkey. In the following two chapters, it is pointed out that when in the 1970s the Republican People’s Party (RPP) managed to be successful at the polls it was not due to its propagation of a genuine social democratic ideology; it was rather a consequence of clientalism and patronage supported by leftist slogans. In chapter four, it is indicated that the 1980 military intervention practically put an end to the left in Turkish politics, and the introduction of market economics and transformation of Turkish voters into a new generation of consumers in the 1980s added salt to the injury. In chapters five and six, the author argues that in post-Cold War Turkey, religiosity and ethnicity have become determinants of voter preferences, and during this period, instead of coming up with electorally attractive party programs and looking at government performance, the RPP has subscribed to “ultra-nationalism” and “ultra-secularism”. Chapter seven shows that the party has been unable to maintain even the backing of the Alevis (which have always appreciated secular politics because of the Sunni threat to them), the trade union movement, and urban dwellers. In chapter eight and the conclusion, the author delineates how social democrats in Europe have moved from their attempts to undermine the capitalist system to their coming to terms with global and competitive forces, and how the RPP has not been able to leave behind the “Kemalist roadmap” it has adopted all along.

This is a useful book for people trying to make heads or tails of the trials and tribulations of Turkish politics since the inception of the Republic (1923). It clearly shows how the RPP, which had set up the Republic, introduced important Westernizing reforms (under Mustafa Kemal Atatük), made significant contributions to ensuring the military interventions lasted relatively short periods of time (under Ismet İnönü), and then tried to distance itself from the centre (under Bülent Ecevit), and how in recent years the RPP as the main opposition has hardly developed socio-economic policies, let alone policies with a social democratic slant, and how it has instead focused on matters of political Islam and ethnic issues from radical secularist and ethnic nationalist perspectives, respectively (especially under Deniz Baykal).

On the other hand, it is not possible to agree with the author on several points regarding the way in which he endeavors to substantiate his basic argument mentioned above. Let me give only a few of such infelicities.

Some conceptual approaches of the author may be problematised. Above, this reviewer has suggested an alternative title for the book, keeping in mind what the author tries to do in his book and the meaning he attributes to Kemalism. There are problems with Kemalism itself, too, that is, with the manner in which the author (as well as some other students of Turkish politics) employs this word/concept. First, it is not often realized that in the 1923-1938 era, the so-called ‘Kemalists’ did not use the word ‘Kemalism’; in fact, there was no reference to that word/concept in the civics books of the era.[1] Secondly, in the book under review, Atatürk, İnönü, and Recep Peker are all placed in the same basket when it comes to Kemalism; however, on some matters these statesmen set for themselves different goals and thus they had somewhat different notions of Kemalism. Thirdly, Atatürk was careful not to turn the principles he had formulated into a closed ideology, and thus he diligently kept his distance from any kind of ‘ism’. As the present author has suggested elsewhere, Ataturk’s views, that is his world view, were turned into a closed ideology by the post-Atatürk intellectualbureaucratic elite.[2]

There are some inconsistencies in the reporting of some issues. In regard to the efforts for the institutionalization of the Westernized reforms, on the one hand it is pointed out that some citizens were “punished by death sentences and executions dished out by the roaming Independence tribunals” (p. 25) and on the other hand it is noted that “compared with other regimes changes, the Turkish experience was relatively bloodless” (p. 28).

There are some critical omissions in the narrative offered: The 1960 Constitutional provisions concerning the powers of the National Security Council were amended so as to increase its powers not only in the post-1980 military intervention period, but also in the post-1971 military intervention period (p. 68). To the state institutions mentioned on p. 145, second paragraph, the author should also have added the Constitutional Court and the Council of State. There are no endnotes for the conclusion, although the author did make references.

Some factual statements made are not correct. “Two of the main determinants of voting in post-Cold War Turkey” have not been “religiosity and ethnicity” (p. 8). If it was religiosity, the votes of the religiously oriented political parties in that country would not have decreased from time to time from 1971 to 2002, and the Felicity Party, which is more religiously oriented than the Justice and Development Party, would have garnered more votes than the latter in the 2002 and 2003 national elections. If another main determinant of voting in the same period was ethnicity, all of the ethnically oriented political parties would have cleared the 10% election threshold in all the elections at which they competed, which did not turn out to be the case, and at the 2002 and 2007 national elections, the Justice and Development Party could not have been so successful in the southeastern region of Turkey as it was. In the wake of the 1980 military intervention, political leaders were not sent off to “remote parts of the country”, but to the same town (p. 69). The Welfare Party’s success at the polls in 1994 was due the successful performance of the municipalities it controlled at the time, not because the key determinants of vote at the time were “religiosity and ethnicity” (p. 142). Recep Tayyip Erdoğan was imprisoned for a speech he had made in Siirt, not in Sivas (p. 180, note 66).

Related to the above, at places the author reports some past events as if they still continue. The third paragraph on p. 107 gives the impression to the uninitiated that Ecevit is still the chairman of the Democratic Left Party; Ecevit left that party in 2002 and died in 2006. One comes across to a similar situation on p. 108, third paragraph.

Finally, a matter of style: one should remain faithful to the original spelling when quoting or giving a reference; thus, one should not change “Behavior” to “Behaviour”, as the author does on p. 180, note 58. The journal there is an American journal, thus the American spelling of the word in question had been used.

Despite these reservations, as already noted, the book under review is a very useful addition to the literature on Turkish politics. It is recommended to both the uninitiated and the long-time student of Turkish politics. 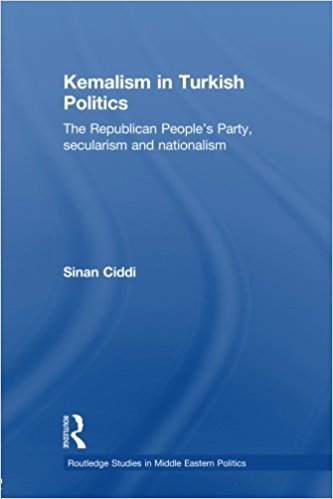