In this framework, Cannon’s book can be considered a positive contribution to understand how the relocation of Armenians has been politicized among diaspora groups. Cannon’s book should not be considered a history book, nor does it aim to focus on the history of the Armenian diaspora. It does not deal with archives or authentic documents proving whether the relocation of Armenians during the First World War was genocide or not. Instead, Cannon explores how the events of 1915 contributed to Armenian political identity. Cannon invites readers to see how ‘the discourse of genocide’ is used to mobile and unify Armenian communities across the globe. Later on, he touches the political campaign of the Armenian diaspora to recognize the events of 1915 as genocide within the international community. He emphasizes that the political campaign run by the Armenian diaspora negatively affects relations between Turkey, Armenia and the Armenian diaspora. In addition, he expands his scope and addresses the ‘reconciliation initiatives’ attempted by Armenian and Turkish decision-makers. Cannon’s work is arguably quite successful and differs from other publications reflecting only a historical perspective in literature, since it deals with the sociological, economic and political dynamics behind the discourse of genocide. Undoubtedly, this effort can be considered one of the strengths of his work.

Cannon constructs his book on the basis of a few key arguments. He claims that the genocide discourse and recognition campaign by the Armenian diaspora seek to homogenize the Armenian people coming from different backgrounds. Historically speaking, there is no united Armenian nation. They have been divided religiously, politically and culturally throughout many centuries. According to Cannon, the aim of supporting the recognition campaign is to create a common and emotional memory for all Armenians. Cannon reminds readers that there are alternative accounts of what happened in 1915. Even though the Armenian claims are mainly pronounced by the Western media, scholars and politicians as ‘a historical fact,’ he states that many people and academics see the Armenian claims as “biased, insufficient and wrong information.” Therefore, he argues that objectivity is often ignored while parties are explaining their claims. This creates strong and conflicting discourses, namely victimhood and denial. Since neither of them convinces the other, their discourses perpetuate a vicious cycle. Moreover, Cannon argues that the recognition campaign and genocide discourse help the Armenian diaspora ontologically to reinforce their identities by othering Turkish identity as the perpetrator of the genocide. Another argument of the book is that the recognition campaign has negatively impacted political relations between Armenia, Turkey and the Armenian diaspora. Cannon argues that Armenia’s domestic and foreign policies are dictated by political actors in the Armenian diaspora. Finally, he argues that the Turkish thesis about the events of 1915 and Turkey’s responses against the recognition campaign are highly reactionary. Unlike the Armenian diaspora, the power and effectiveness of the Turkish diaspora are limited because of the socioeconomic status and demographic dynamics of Turkish migrants. In most cases, Turkish migrants have difficulties to establish diasporic identity and sustain effective relations with host countries. Additionally, Turkish people do not tend to define their identities with reference to certain trauma or memory while they are explaining what happened in 1915.

Legislating Reality and Politicizing History is quite successful in capturing various aspects of the events of 1915. It is a voluminous book, consisting of ten chapters excluding introduction and conclusion. The first chapter addresses key points and nuances within the complicated debate. By deconstructing the campaign for Armenian genocide recognition, Cannon seeks to provide a framework which is required for an examination of historical and political data. The second chapter can be seen as a literature review dealing with theories of identity, construction of self and other, roles of chosen trauma, glories and the collapse of time (as psychological aspects of identity), ethnic conflict and diaspora politics as well as globalization. In chapter three, a historical foundation is provided for understanding socio-political relations between Armenians and Turks. This chapter shows how the Armenian community in the Ottoman Empire was politicized throughout the 19th century. Accordingly, the Ottoman government’s reactions to the Armenians rebels are evaluated. Besides providing this historical account, this chapter also focuses on definitions and Armenian interpretations of key concepts such as genocide, crimes against humanity, memory, trauma, ethnic cleansing and time collapse. Cannon discusses explicitly how the Armenian communities have defined and conceptualized the term ‘genocide’ in different ways through their lobbying organizations. Furthermore, Cannon shows how Turks and Armenians in both Turkey and Armenia have reacted to the diaspora’s reconstructed memories. Chapter four describes Armenian lobby groups in the U.S. and France. By paying attention to their efforts and campaigns, Cannon discusses how the Armenian political identity is mutually construed and strengthened. Chapter five is about political goals and the nature of the Armenian diaspora’s campaign of genocide recognition, and provides a board discussion on genocide theory, law and legislation. In addition to this discussion, Cannon tries to evaluate possible outcomes if the events of 1915 are recognized as genocide. As he notes, there is no consensus about expectation from the recognition campaign. He critically discusses the boundaries of the recognition campaign by posing the following questions: is it a simple request for public recognition, a public apology or revision of education material for schools? Or would the recognition of the events of 1915 as genocide allow Armenian political groups to demand a territory from Turkey? Moreover, Cannon wonders who exactly would benefit from recognition, and who benefits from the campaign by members of the Armenian diaspora. Chapter six discusses the official statement of the Turkish government and public opinion.

Even though the relocation of Armenians happened over hundred years ago, it is still a highly controversial and sensitive topic in public. It constantly affects Turkey’s past, present and future. As Cannon discusses, Armenians in the Republic of Armenia did not experience the events of 1915 first hand. Rather, he notes, Eastern Armenians learned what happened in the relocation of Armenians in 1965.1 Chapter seven underlines the deep-seated divergence between the Armenian Diaspora and Armenia, by asking whose genocide it is. It is accurate to say that different expectations and goals of the Armenian diaspora influence Armenia’s domestic and foreign policy agendas. Chapter eight discusses how the recognition campaign of 1915 and the dichotomy of the Armenian diaspora affect Armenia’s development, domestic and foreign policies. Chapter nine evaluates different theoretical and operational approaches that can be applied by parties as pressure mechanisms. It also highlights how these approaches affect the diaspora, the Republic of Armenia and the Republic of Turkey. In chapter ten, Cannon argues that the events of 1915 as historical atrocities should be considered within the background of the human rights regime to allow all parties involved the opportunity to view the issue from novel vantage points. In this way, it is thought that parties can overcome the status quo and satisfactory progress can be achieved.

Despite the book’s many merits, one criticism that can be directed at the author and his conclusion is that if only “the events of 1915” are considered within the human right regime, this would be an unsatisfactory effort because the tragedies which were experienced by other subjects of the Ottoman Empire and the difficulties of the First World War would be neglected either deliberately or unintentionally. This unequal attitude would prevent the Turkish people from meeting with “a common pain” and could place into question the equity of the human right regime.

To conclude, Cannon’s book is a welcome contribution to the field showing the importance of the political aspects of the events of 1915. His work should be seen as a novel effort to understand how the genocide recognition campaign has affected the Armenian political identity and homogenized the people of the diaspora who have been dispersed and differentiated in various parts of the world. Legislating Reality and Politicizing History is strongly recommended to academics and students who want to understand Turco-Armenian relations in general, and the pressure of the Armenian diaspora to maintain the genocide discourse, in particular. 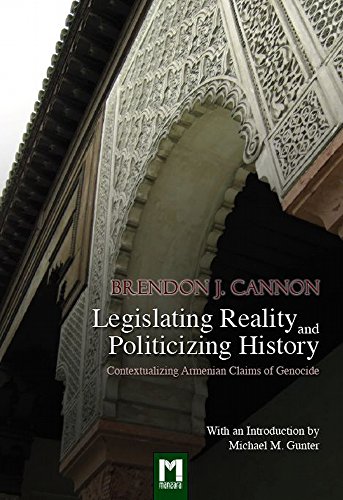 The Role of Turkish Drones in Azerbaijan’s Increasing Military Effectiveness: An Assessment of the Second Nagorno-Karabakh War