According to the authors, global transformation takes place through three intertwined processes, namely industrialization, the rational state and ideologies of progress (p. 6). The difference between this transformation and others is its development rate: “the global transformation has been compressed into a compact time span, with major changes happening on a scale of decades rather than centuries” (p. 23). The significant developments in the transformation also have created a new “mode of power” that can be described as “the material and ideational relations that are generative of both actors and the ways in which power is exercised” (p. 1).

The book consists of three parts divided into ten chapters. In the first part, there are two chapters, which offer an overview of the global transformation in the nineteenth century and question the importance of the Peace of Westphalia (1648) and the institutionalism of international relations (1919). The authors state that, counter to the mainstream narrative, Westphalia did not constitute but rather ‘limited’ the idea of sovereignty that had been established earlier at the 1555 Peace of Augsburg. Moreover, they argue that the discipline of International Relations (IR) was already institutionalized before 1919 since it was taught as a course in the United States during the last part of the nineteenth century (pp. 49–50).

The second part has six chapters; they reveal how the modern structure of international relations is shaped. These chapters address how a core-periphery “Western-colonial” period was established through the global transformation; it then changed into a “Western-global” stage starting from 1945 to the first decade of the twenty-first century (pp. 176, 273). According to the authors, the former period was quite unequal and consisted of mostly European states and their colonies. (p. 176). The second period, on the other hand, was more diverse and less Western; in this period, the core was expanding while the periphery was shrinking. (p. 235).

The last part of the book is composed of two chapters. The first chapter deals with the distribution of power. Accordingly, the authors state that the first two stages of international society (Western-colonial and Western-global) are forms of “centred globalism.” The third stage is “decentred globalism” (pp. 273–274), in which the mode of power is now widely dispersed rather than concentrated between a few states as it was in the first two stages. Moreover, they affirm that only two of the main ideologies that emerged during the nineteenth century are still relevant: liberalism and nationalism. Thus, the new ideological wars will be between four types of capitalist governance: liberal democratic, social democratic, competitive authoritarian and state bureaucratic (pp. 281–283).

This is a well-researched book with solid arguments on an understudied subject. Although there are works that question the importance of the turning points/dates of the IR discipline or the modern international order, such as “The Big Bangs of IR: The Myths that Your Teachers Still Tell You,”1 the number of these works is limited. Moreover, Buzan and Lawson not only debunk these dates but also explain the concept that must replace these dates with proper arguments.

The authors are also right about the changing world order. The election of Donald Trump as president of the United States and the current success of populist and far right parties that advocate leaving the European Union are indicative of this situation. Probably Trump was right, at least for now, when he stated that “the future does not belong to the globalists. The future belongs to patriots,” at the United Nations General Assembly gathered last year.2

Despite the fact that the authors’ arguments are coherent and generally convincing, there are also shortcomings. While the authors deal with immigration, they only address the issue from an economic point of view. However, people migrate not only in search of better economic conditions but out of longing for security and freedom. For instance, the Amish migrated from Europe to the United States to escape pressure. Syrians migrate to Europe and Uyghurs from China for security. Thus, focusing only on the economy in terms of migration is a crucial mistake since it misses the democratic difference among developed countries and undeveloped ones.

Another problem of the book is the idea of the “mode of power” that changes international relations. Although the authors associate the existing international order with this power in many parts of the book, the concept is not detailed enough. Instead, they use the concept as a deus ex machina.3 The concept is insufficient to deal with issues such as migration, technological development and colonialism, which are emphasized throughout the book.

Despite its shortcomings, Buzan and Lawson’s The Global Transformation: History, Modernity and the Making of International Relations offers new discussions about the establishment of the IR discipline and the modern international order. The book should be read by both academics and students, since it challenges a traditional, settled line of thought in the IR discipline.

3. This is a Latin term that comes from Greek classical theatre and is generally used in cinema. It means “god from the machine,” and refers to miraculously resolving a problem that would normally not be resolved. See Freddie Rokem, “Theatrical Immanence: The Deus ex Machina after the Death of God,” Performance Philosophy, Vol. 3, No. 3 (2017), pp. 781-793. 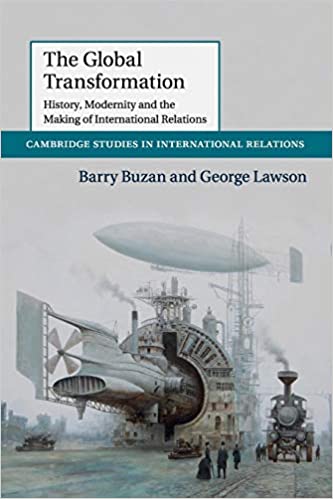