It is comparatively well-known now that the late Albert Hourani came rather to regret the title of his probably most famous work, Arabic Thought in the Liberal Age, 1798-1939 (London: Oxford University Press, 1962), specifically the use of the term ‘liberal’. The problem was partly over the meaning of the term, but it was also that by selecting this approach he tended to underestimate the contemporary ‘non-liberal’ trends. In such terms it has also been argued that his inclusion of, for example, Rashid Rida and the Muslim Brotherhood was possibly a bit on the optimistic side.

It is comparatively well-known now that the late Albert Hourani came rather to regret the title of his probably most famous work, Arabic Thought in the Liberal Age, 1798-1939 (London: Oxford University Press, 1962), specifically the use of the term ‘liberal’. The problem was partly over the meaning of the term, but it was also that by selecting this approach he tended to underestimate the contemporary ‘non-liberal’ trends. In such terms it has also been argued that his inclusion of, for example, Rashid Rida and the Muslim Brotherhood was possibly a bit on the optimistic side.

The term ‘liberal’ has since been the subject of the kind of contestation which has characterized the use of all such terminology derived from European/western experience and transferred to various Muslim and Islamic contexts. It is thus exposed to the kinds of question marks which a placed against other, often manipulated terms such as fundamentalism, radicalism, progressive (see e.g. Gudrun Krämer, Gottes Staat als Republik, Baden-Baden: Nomos, 1999, pp.29-32). More recently, there has been a marked revival in writing about various forms of ‘liberal’ Islam, without or without the use of the term itself, primarily as a counterpoint to the growing focus – some would say obsession – with especially radical (which means what?) and militant forms of political Islam. This is exemplified in the useful anthology of texts collected by Charles Kurzman (ed.), Liberal Islam: a sourcebook (New York: Oxford University Press, 1998), followed four years later by his anthology Modernist Islam, 1840-1940: a sourcebook (New York: Oxford University Press, 1998).

In his introduction the editor of the volume under review picks up this dimension with the argument that ‘liberal’ ideas have been circulating in the Middle East for well over a century. In the process they have become internalized to an extent that they cannot just be dismissed as alien and without any local authenticity. While the contributors to the conferences, which have led to this collection of thirteen papers, were left to work with their own definitions of ‘liberal’, a degree of consensus emerged. Firstly, the substance of ‘liberal’ is not the preserve of any one nation, region or political tradition, including those arising in the Muslim world or out of an Islamic heritage. Secondly, there emerged a consensus on what liberalism means in this context:

The twelve main papers are organized into three sections which correspond not only to the emphases of the papers included but also to the three key perspectives of the problematic of the location of liberalism in the region. The first five are presented under the heading “The impact of the West: mission, mandate, and education”. The focus is especially on the development of higher education in its imported forms, here focused on the American Board whose activities led to the founding of the Syrian Protestant College, to become the American University of Beirut (AUB), in Ussama Makdisi’s reminder of the missionary motivations of the venture, and in Betty Anderson’s analysis of the limitations to protest expressed by the AUB leadership during the 1920s.Abdul-Karim Rafeq looks at the ongoing tensions between the Syrian University in Damascus and the French authorities during the mandate period. Peters Sluglett’s discussion of the mandate system shows how the liberal ideals with which the victorious powers had sought to found a new international order after the horrors of the 1914-18 war were very quickly forgotten, partly under the impression of continuing rivalries of self-interest and partly in response to the desire to implement the ideals expressed by the young people produced by those new universities. The next five chapters go under the heading “Constitutionalism, revolution, and liberal thought”, very much under the impression of the late Ottoman experience. Anne-Laure Dupont and Ilham Khuri-Makdisi respectively look at two different perspectives on the Arab response to the revival of Ottoman constitutionalism, the former at the writings of al-Hilal and al-Manar, the latter at the more radical trends which found an audience in parts of what was to become Lebanon.

Constitutional trends in the last five years before the Ottoman empire was abolished in 1924, discussed by Hasan Kayalı, form a link to papers by Eyal Zisser on Syrian debates and Raghid El-Solh on the tensions between religio-nationalist and consociational perspectives in mandate Lebanon. Finally, the heading of the third part, “Liberal thought and its ambivalences” is an appropriate summary of the topics of the last three papers. Christoph Schumann’s discussion of Ameen Rihani well illustrates the ambiguity in what he describes as the ‘transcultural space’ engendered by the encounter of ‘east’ and ‘west’. Marilyn Booth illustrates the ambiguity of gender roles, expectations and (self-) perceptions of educated women of the new Egyptian bourgeoisie. And Manfred Sing points forward in time to the decline of the liberal tradition in his study of the ‘meta- morphoses’ of Sami al-Kayyali.

While the papers focus on the eastern Mediterranean, meaning – in essence what used to be called the Levant, i.e. Bilad al- Sham, their implications stretch beyond, both towards the more central parts of the former Ottoman space and very markedly towards Persia with its sequence of constitutional uprisings. While it was the authoritarian trends which tended to win in the latter half of the 20th century, as the third part anticipates, it is worth remembering, as the editor pointed out in his introduction, that liberalism was for a time almost hegemonic – and also worth remembering that, although the balance has shifted, liberal ideas still exist, and not just on the margins, as Iran has recently reminded us. 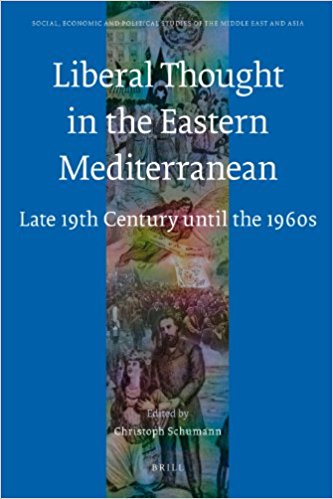