“Ideal anarchists,” a term borrowed from Konstantin Smirnov, a Russian orientalist, denotes what the author calls “disorder,” or “absence of political order in Iran” (p. 1, pp. 213-14). Deutschmann tries to analyze Russian goals and strategies in Iran during the years between 1800 and 1914. He believes that the inefficiency and weakness of the central government (failed state) in Iran provided maneuvering room for other non-state actors such as tribal groups and urban merchants. The interactions of these actors with each other and with foreign powers (the “great game,” p. 4), created a situation which the author calls “the unruliness of Iranian society.” He argues that this unruliness was the main variable that shaped Russian policy toward Iran (p. 214), and even paved the ground for or legitimized Russia’s intervention in Iran (p. 213). According to Deutschmann, Russia’s major goal in Iran was to bring political stability to Iran’s monarchical system. Besides that major goal, Russia pursued some economic and colonial objectives; another main objective of Moscow was border settlement in Central Asia and the South Caucasus.

After a brief history of Iran-Russia relations, the author describes the relations between Russia and Iranian merchants (pp. 40-57) and nomads (pp. 58-78). Russia’s imperialistic objectives in Iran, specifically its interventions in Iran’s domestic developments such as the Constitutional Revolution, the civil war in Tabriz, and the opportunities and challenges posed by tribes constitute the remaining chapters of the book. Deutschmann evaluates Russia’s role in Iran’s internal politics as positive and constructive, supportive of the transformation of the Qajar dynasty and instrumental in bringing political stability to the country.

This book tries to shed light on some of the disregarded aspects of Russo-Iran relations during the years between 1800-1914. The author investigated many marginalized documents from archives in Russia and Georgia and his contribution to the field worths a careful scrutiny. Like any other books, however, Iran and Russian Imperialism enjoys some strengths and suffers from some shortcomings.

The most advantageous aspect of the book is its endeavor to provide a novel analysis of Russia’s entanglement in Iran by scrutinizing some new and previously disregarded documents. But there are some shortcomings that should be addressed: first, the reseach design and secondly, the reasoning of the book.

The main objective of Deutschmann’s research is to analyze Russian objectives and adventures in Iran. To do so, the author relies heavily on Russian sources. Although Deutschmann does refer to some Persian references, these sources are mostly secondary. By reviewing the book, one can claim that the author has recited the Russian perspective on the issue. In order to fully examine Russian involvement in Iran’s internal affairs, it would be fair to refer to source material from the Iranian perspective, at least as much as the Russian sources. Although focusing on Russian narration is the novelty of Deutschmann’s approach, it doesn’t provide sound and unbiased research.

From the very first pages, one encounters words such as “disorder,” “anarchy,” or the “unruliness of society” in Iran. Being one of the long-lasting empires in the world, this perspective raises questions, such as how is this possible? What happened to the Iranian/Persian Empire? Why it is engulfed in a such disorder? The author doesn’t provide sound answers to these questions and leaves the reader bewildered. To name some reasons, we could refer to the Russo-Iran wars and especially the Gulistan and Turkmanchay treaties, as well as the political games of certain great powers such as Russia and Britain. The author does refer to these fundamental issues, but in a very brief fashion; he deals with them as trivial issues (pp. 4-6). It would be quite fair to expect Deutschmann to provide some clarifications on the so-called “anarchic state” in Iran. Doing so would require some retrospective comments or flashbacks to prepare readers for the current situation and prepare them for the author’s later arguments.

Adopted from his doctoral thesis, Deutschmann’s book suffers from another problem. Being unfamiliar with Iran’s internal dynamics, relying heavily on Russian sources, and some problems in research design lead the author to another flounder. Deutschmann’s claims about Russia’s goals in Iran are contradictory and incorrect. For example, he argues that the “unruliness of Iranian society was a major condition that determined the outcome of Russia’s policies towards the country” (p. 214). Here the author forgets to shed light on the Russo-Britain rivalry and Russia’s imperialistic goals which were at least as important as the internal dynamics of Iran.

Another instance of problematic reasoning involves the author’s claim about Russia’s primary goal in Iran. He argues that the “political stability of the Iranian state was the central goal of Russian policies throughout the nineteenth century” (p. 215). This kind of (false) reasoning stems from relying on Russian sources. Even the most ardent Russophiles in Iran can’t approve this claim. According to the mainstream Iranian narrative, Russia’s most primary goal in Iran was its imperialistic ambitions. A strong and stable government in Iran would oppose Russian interventions, the manipulation of its internal affairs and the annexation of its territories in Central Asia and the Caucasus by Moscow. Elsewhere the author argues that “…Russian officials could hardly rely on their role at the court alone to achieve their political goals and were increasingly drawn into the local politics of Qajar Iran… (p. 33). In the upcoming pages he states: “…the Russian military in many situations preferred to seek the cooperation of the nomads rather than to work with local Iranian officials (p. 215). These arguments are problematic and contradictory. Involvment in Iran’s internal politics means dealing and interacting with Iranian tribes and commercial agents. As the author himself describes earlier in the volume, these two groups were somehow rivals to the central government’s authority and so, these statements are in contradiction with the author’s arguments on Russia’s primary goal in Iran.

Another key and critical element that should have been analyzed in the book is the role of religious leaders. The role of religious figures was much more important than that of tribes or merchants. But it has been neglected in the research. Maybe their involvement is the main reason for the order (as claimed by the author) in such a so-called anarchical state (p. 214).

Despite some defects, the book is worth reading. It provides a new perspective on Russian entanglement in Iran. There is a huge literature about the great power’s politics in Iran during the era, but this book presents an analysis that is close to the Russian narrative. It is recommended to all of those who are interested in Russia’s imperial objectives in Iran and beyond. 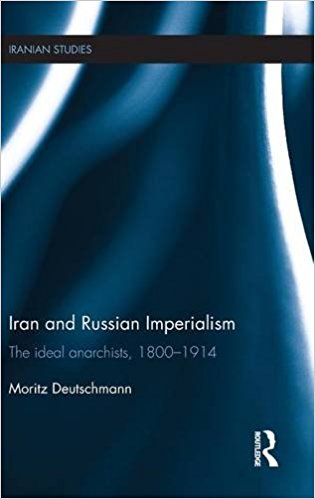