How to Choose a Leader: Machiavelli’s Advice to Citizens

One of Viroli’s aims is to refute the common perception that Machiavelli was a ‘teacher of evil’ who knew nothing about democracy or liberty. The author argues that Machiavelli, who he often refers to as ‘Our Counselor,’ was in fact a political thinker who was honest, believed in the principles of liberty and the common good, and who sincerely loved his country. Viroli divides the book into twenty lessons, each lesson presented as a chapter on its own.

How to Choose a Leader: Machiavelli’s Advice to Citizens is a commendable work by author Maurizio Viroli on the traits that citizens should look for when choosing a leader. The book, published in the United States in 2016, was timely as Americans were busy with the presidential campaign that ultimately led to Donald Trump’s ascendance to power as the 45th President. The author frequently draws examples from the U.S and its leaders, in particular former President Abraham Lincoln, and how Machiavelli’s description of a leader has been observed within various U.S. leaders across history. It is as if the author is mainly advising American citizens on what kind of a leader to choose as their next president at a moment when Obama’s tenure in the White House was about to end. The author extracts the advice from Machiavelli’s own works such as The Prince and Discourses on Livy.

One of Viroli’s aims is to refute the common perception that Machiavelli was a ‘teacher of evil’ who knew nothing about democracy or liberty. The author argues that Machiavelli, who he often refers to as ‘Our Counselor,’ was in fact a political thinker who was honest, believed in the principles of liberty and the common good, and who sincerely loved his country. Viroli divides the book into twenty lessons, each lesson presented as a chapter on its own. Distinguishable quotations from Machiavelli’s oeuvre are placed as titles of the chapters to introduce the ideas which Viroli elaborates, using examples drawn mainly from the American setting. In this way, the author succeeds at incorporating Machiavelli’s work in a modern-day political context while providing a much simpler wording. The book mainly advises citizens on what kind of leaders to choose and warns about the kind of leaders to avoid.

In lesson one, citizens are urged by Machiavelli to “keep their hands on the republic” by practicing their civic duty of voting, engaging in politics and “choosing the lesser evil” among the candidates when voting (p. 1). Failure to vote gives leaders free reign to dominate and pursue self-interests at the expense of common good; therefore citizens should go vote so as to defend their liberty (pp. 2-3). Lesson two helps voters discern between the lesser evil among the candidates by judging by what they have done instead of judging them by their appearances (p. 6). To know this, citizens are advised to evaluate both the work of their leaders and the advisors and ministers that surround them (pp. 7-8). According to Machiavelli, those who surround our leaders should be competent, faithful and straightforward, not flatterers. Only under such conditions, can we presume the leader to be good (pp. 8-11).

Lesson three urges voters to vote based on leaders’ pursuance of the common good, not personal or group interests, so as to make republics great. Citizens should not follow their base passions, such as love for or hatred against particular groups, as this abuses the liberty of other people (p. 14). This point is highly relevant, considering the wave of far right groups that have been very vocal in the West and have increasingly garnered public support in some cases. A good example is how Donald Trump’s anti-immigration and anti-Muslim stance has been seen as key to his victory over Hillary Clinton in the 2016 presidential elections.

In lesson four, citizens are advised to vote for leaders who adapt their political strategies when circumstances demand it, and to change their leaders if they do not ‘tune with the times.’ While changing political strategy according to circumstances is a virtue in politics, citizens are warned in lesson five not to elect as presidents people who “embark on potentially perilous adventures” without evaluating the costs and benefits of the policies they want to adopt (p. 25). As history repeats itself, citizens in lesson six are advised to vote for leaders who learn from history and who emulate good leaders as their role models (pp. 26-28).

Citizens are advised in lesson seven to choose leaders who are firm and courageous both in times of “prosperity and adversity” and to avoid voting for leaders who are intoxicated by good fortune and crumble in times of despair (pp. 33-35). Such leaders, as explained in lesson eight, put their trust in a God who helps those who fight for justice and liberty. However, these leaders should not allocate to God the sole responsibility of emancipating them; rather they should do their “part and at the same time trust God” (p. 38).

Leaders who care for their reputation and achieving glory instead of power –attaining virtue through avenues like massacre and betrayal– should be preferred by voters as indicated in lesson nine since such leaders aspire to be remembered well by the future generations (p. 44). Again returning to the theme of the common good, lesson ten and eleven encourage voters to choose leaders who will fight against corruption instead of enriching themselves (p. 46) and who treat all citizens equally based on merit, irrespective of their social status (pp. 52-53).

In lesson twelve, citizens are urged to pay taxes and in return are advised to elect leaders who will use the public funds to guard liberty. Neither should citizens deceive the state by not paying taxes, nor should the leaders misuse public funds (p. 62). Keeping the same people in power for a long time is discouraged by Machiavelli in lesson thirteen, as soldiers risk becoming partisans of the leaders and long-term leaders may form a “network of private allegiances” (pp. 63-64). Instead, voters are urged to elect young leaders with impressive traits instead of leaders who stick to power for long (p. 66).

The interests of the country come before God and morals as noted in lessons fourteen and fifteen. This means that the president’s faith does not matter if he or she promotes liberty (p. 70) and simultaneously, he or she should be able to sacrifice liberty for the country’s security if necessary (p. 75). Lessons sixteen and seventeen highlight that extraordinary situations necessitate that the president be vested with extraordinary powers in full respect of the constitution (p. 82) even if it means waging a war, provided it is not waged against political liberty (p. 85). However, this contradicts the earlier point that morals should be subordinate if the country’s safety is threatened.

Voters are advised in lesson eighteen to choose eloquent leaders who also enjoy good morals as other leaders could mask their evilness with eloquence (p. 92). In lesson nineteen, Machiavelli warns against neutrality during wars and cautions against taking sides (p. 98). Nevertheless, there is no particular advice to the citizens by Viroli on how they can know whether a leader is going to be neutral or not in case of war. Lesson twenty warns citizens against choosing leaders who plan to introduce social or political reforms that conflict with the principles of justice and international law (p. 102).

In conclusion, the author provides a ‘leader election manual’ based on Machiavelli’s works, and while it is praiseworthy in its coherence of thought, the book fails to consider authoritarian governments and the rigging of elections, among other factors, rendering this manual impractical in some countries. The assumption is hereby a democratic country where fair elections and respect for the rule of law prevail. In this regard, the book may prove helpful to voters in democratic countries in the future, as its distinct style of writing is easy to read. In short, How to Choose a Leader reinforces Machiavelli’s work in a considerably eloquent way. 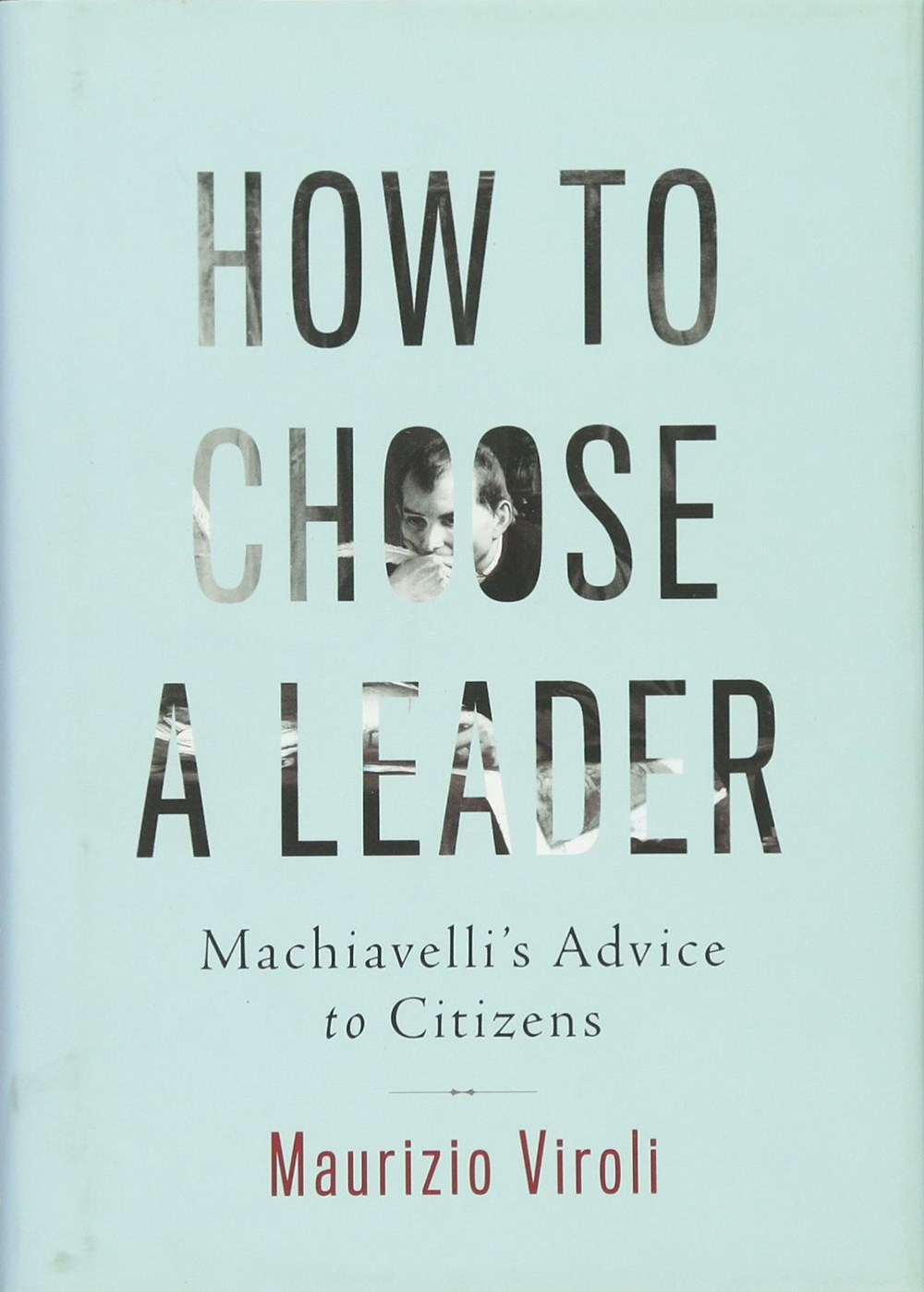