The edited book presents multiple perspectives and a coherent research agenda characterized by an interdisciplinary approach. It is a major contribution to the literature on gender relations, in part due to its original approach to questioning binary debates such as secularization-democratization as well as Islamic exceptionalism and women’s rights. Through the case studies, the book goes beyond the Middle East to encompass analyses of the larger Muslim world. Its engagement with a broad range of comparative literature, providing rich topics, issues, and debates, makes it a fascinating read. The volume is an authoritative source of reference for anyone interested in understating the nuanced relationship between democracy, secularism, and gender in contemporary Muslim settings in an objective and comprehensive way.

Gender and democratization are among the topics in which the notion of ‘Islamic exceptionalism’ appears to be most evident. Exceptionalism here implies an intrinsic quality in ‘Islamic’ culture that prevents women’s emancipation and gender equality. The edited volume, Islam, Gender, and Democracy in Comparative Perspective, succeeds in disproving the assumptions of exceptionalism. A universal approach does not exist for the development of women’s rights. The contributors to this volume aptly demonstrate that the relationship between religion, secularism, democracy, and gender is multifaceted, not only in the Muslim world but globally.

The editors, Jocelyne Cesari and José Casanova divide the volume into two conceptual parts. The first looks at religion, gender, state, law, and democracy through diverse disciplinary perspectives such as sociology, history, law, and political science. Part two consists of case studies of different Muslim examples, both in terms of women’s rights policies and the contextualized responses of social actors, Islamic and secular alike, to the question of gender.

A central theme of the edited volume is the diverse correlation between democratization and women’s rights in Muslim national settings, as elsewhere in the world. José Casanova (Chapter 2) and Joan W. Scott (Chapter 3) look at the intersection of women’s rights concerning secularism and democratization in the Catholic world and present critical insights with comparative significance for Muslim contexts. Casanova argues that during the third wave of democratization, issues of gender, such as abortion and same-sex marriage, did not play a determining role. He problematizes the correlation between democracy and secularism and the oversimplifications produced by this connection regarding women’s rights. Scott questions the secularization thesis by showing that secularization did not necessarily go hand in hand with the extension of women’s rights in France, where laicism maintained a misogynistic character until the mid-twentieth century. Scott finds l’affaire du foulard to be not an issue of women’s emancipation, but a ‘civilizing mission’ in disguise, driven by laicism that has never accorded gender equality a primary position (p. 74).

A common thread in each chapter is the contested nature of the relationship between the state, national actors, and global ideas when it comes to gender in the  21st century Muslim world. Complex rights discourses, practices, and policies are evident, borne out by complex social processes involving the state, women’s groups, and Islamic actors. Cesari, observes the advancement of women’s social, economic, and political rights in most of the Muslim world while ‘the rights of the self,’ such as sexual and family rights, remain generally patriarchal and conservative (p. 7). She examines the state’s simultaneous yet contradictory roles in advancing women’s rights, both as a discourse and in policymaking, in social, political, and economic realms and suppressing them in private law matters. In Chapter 4, Robert W. Hefner teases out the tensions between state policies on gender and Islamic social actors. State and the feminist groups equally resort to Islamic hermeneutics to justify their activities. In Chapter 5, Susanne Schröter explores the relationship between transnational religious activism and women’s rights and national legal systems. Similarly, Cesari observes, “state policies are increasingly challenged by transnational ideas and agents which influence the national context of Islamic religiosity” (p. 41).

Refutation of Islamic exceptionalism in this book is undertaken through the consideration of socio-political factors in women’s rights, such as regime type, kinship, communal stratification, familial relations, ‘political and institutional landscape’, and the ‘pre-established moral capital of religion’ (pp. 28, 40). Islamic theology does not determine women’s rights situations in the Muslim world. This nuanced approach helps to account for the absence of equal access to divorce in Egypt and Algeria and its presence in Turkey, Tunisia, and Indonesia. Even though Islam cannot be taken as a determining factor, as Cesari argues, the reshaping of religious and societal norms has an impact on gender equality. In Chapter 5, Schröter argues that the demand for democracy during the period of the Nahda (Arab renaissance) went hand in hand with women’s emancipation, both directly linked to the reinterpretation of Islam. Malia Stivens’s detailed work on Malaysia (Chapter 11) focuses on the significance of women’s groups in reshaping Islamic thinking and practice. Correspondingly, Yüksel Sezgin, in Chapter 7, underlines the positioning of religious groups vis-à-vis the state in changing the accounts of Islamic family law.

The volume contains case studies of different Muslim minority and majority contexts displaying a variety of state-religion relations and forms of religious accommodation. The chapters on majority Muslim contexts provide a wide range of Islamic and secular debates and policies regarding gender. State secularism in post-independence Turkey and Tunisia initiated an advancement of women’s rights without democratization. In authoritarian secular states of the Muslim world, women’s rights have been much less problematic than political liberties and individual freedoms. In other authoritarian Muslim majority states, however, with Islam embedded in their legal framework, such as Egypt and Pakistan, Islam was utilized to define and redefine ‘the good citizen,’ especially during periods of political turmoil (p. 7). A women’s body has become a site for national identity, dominated by an Islamic cultural reference, in which rights, such as family life, sexuality, and divorce, could translate into forms of discrimination. Private law in these cases includes more discriminatory clauses against women accompanied by gender equality concerns with the codification of a certain account of sharia.

Despite Turkey having “one of the most progressive legal codes regarding women’s rights,” the presence of strong elements of patriarchal popular culture continues to undermine the struggle for gender equality there (p. 39). The edited book astutely shows how each Muslim majority country’s complex social, political, and institutional features both offer distinctive prospects and place unique limits on women’s rights.

State policies concerning women in Muslim minority contexts are also examined in this volume. Both Narian and Sezgin highlight state-religion relations in Muslim minority cases (India, Israel, and Greece) with direct implications for women’s empowerment. Vrinda Narian’s case study on India (Chapter 8) suggests that demands for Islamic law may be seen as a human rights issue invoking religious multicultural accommodation methods (such as legal pluralism). Narian examines the tensions between individual and group rights embodied in the ‘universal liberalism versus multiculturalism’ debate, with a specific focus on Muslim minority women. Sezgin analyzes legal pluralism in Greece and Israel. States have refrained from intervening in Muslim Family Laws (MFLs) even where there has been a negative impact on gender equality. While political authorities hesitate to make legislative interventions, Sezgin reveals, the state civil courts provide a clear alternative for the Muslim minority that creates pressure for the reform of religious courts.

Contributions on a wide range of topical debates and examples under a single theme brought together by the editors is an ambitious task that requires organizational and conceptual clarity. The extensive introduction by Cesari explains the contents, key terms, arguments, and scope of the edited volume and provides an intelligible framing of all the chapters. Although a very well-structured volume, an afterword would have been helpful to interweave the various strands of positions together and illustrate the potential for further research.

Overall, in Islam, Gender, and Democracy in Comparative Perspective, Jocelyne Cesari and José Casanova bring together leading experts in various fields presenting in-depth case studies. The edited book presents multiple perspectives and a coherent research agenda characterized by an interdisciplinary approach. It is a major contribution to the literature on gender relations, in part due to its original approach to questioning binary debates such as secularization-democratization as well as Islamic exceptionalism and women’s rights. Through the case studies, the book goes beyond the Middle East to encompass analyses of the larger Muslim world. Its engagement with a broad range of comparative literature, providing rich topics, issues, and debates, makes it a fascinating read. The volume is an authoritative source of reference for anyone interested in understating the nuanced relationship between democracy, secularism, and gender in contemporary Muslim settings in an objective and comprehensive way. 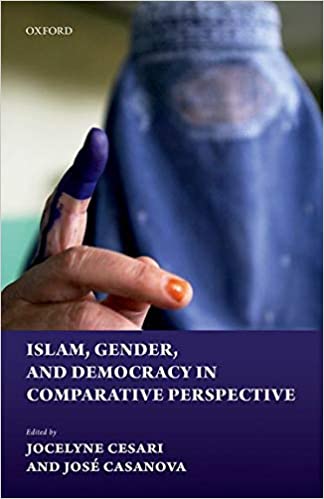