Christianity and American State Violence in Iraq: Priestly or Prophetic? attempts to rethink the relationship of religion and violence by taking American Christians’ responses to the U.S. invasion of Iraq as a case study.

Sociologist Christopher A. Morrissey’s book Christianity and American State Violence in Iraq: Priestly or Prophetic? attempts to rethink the relationship of religion and violence by taking American Christians’ responses to the U.S. invasion of Iraq as a case study. The two terms in the title of the book, ‘priestly and prophetic,’ come from Max Weber’s work and Morrissey uses them to describe two different religious orientations toward the state and toward war. The priestly approach legitimizes and defends the state’s power and its war-making capacity, whereas the prophetic approach challenges it. The overall purpose of the book is to investigate whether Christians in the United States took a priestly or a prophetic approach in the context of the Iraq war, and to explain the variation among Christians regarding their perspectives toward the war.

The book finds that among religious elites, the prophetic approach prevailed and the priestly approach was a minority position. In contrast, in the case of non-elites, the priestly approach was more common. To explain the variation among these attitudes, Morrissey employs “contact with the victims of structural violence” (p. 6) as an explanatory variable. After comparing and contrasting the biographies of interviewees, Morrissey finds that one salient characteristic distinguishes war opponents from proponents: the former have been exposed to the destructive consequences of war in different contexts. Such exposure was a “life changing experience” (p. 125) and it made interviewees “aware of human suffering” (p. 121). On the other hand, war proponents’ biographies do not include such exposure. They lived insulated lives and had no direct contact with victims of structural violence. Although Morrissey seems careful not to attribute a deterministic effect to these contacts (pp. 132-133), he still gives too much explanatory power to such experiences. As he says, “The broad public support for the Iraq war is, sociologically speaking, the unsurprising result of social factors that are relatively well known to students of American religious public life” (p. 151). The term “social factors” in this quote refers to people’s lack of contact with victims of violence, and for Morrissey this is the main factor for explaining one’s position vis-à-vis the war.

Morrissey’s finding on the importance of exposure to victims’ suffering in transforming one into a war opponent is insightful; it would be beneficial if other studies were to test this argument in different cases. That said, Morrissey in his conclusion overstates his argument and, despite his claims to the contrary, (pp. 132-133) he seems to make a deterministic argument. In particular, the quote given above on page 151 seems a bold claim that cannot be substantiated by the evidence presented in the book. As Morrissey himself acknowledges, “there are clearly many other factors which contribute to the formation of anyone’s religious identity” (p. 133). Based on this contention, it would be more reasonable to state his case in probabilistic terms instead of presenting it as if it were a straightforward truth.

Also, there are reasonable grounds to be skeptical about the claim that war proponents have not been exposed to the suffering of victims. They may not have been exposed directly, but is it necessary for someone to directly meet a war victim to be aware of human suffering? Morrissey laments that Americans are “woefully ignorant of the rest of the world” (p. 153). But he conducted his interviews with highly educated people such as Catholic philosopher Michael Novak. Can we claim that Novak is woefully ignorant of the rest of the world? This does not look like a defensible claim, and that is why it might be unwise to attribute one’s moral position about war to exposure to victims’ suffering. For someone like Michael Novak, there are a lot of ways of seeing U.S. policies on human suffering. To make sense of his pro-war position, we should look at other factors rather than simply asking whether he was directly exposed to the impact of war on people or not. Aside from scholars like Novak, it would also be questionable to portray non-elites as ignorant of the suffering of other people. One does not need to be an expert on the history, culture and society of any non-democratic country to know that toppling its authoritarian leader through a foreign invasion would lead to certain costs for its citizens.

Morrissey is disappointed that “we Americans see the rest of the world through distinctly American lenses that blind us to others’ reality” (p. 153). This is an admirable concern insofar as he tries to overcome the ethnocentrism of his compatriots, but again it is not clear how exposure to victims’ suffering may change one’s perspective. One can be very knowledgeable about how one’s country’s policies impact others but still passionately defend them. Again, Morrissey’s interviewees were religious elites, and it does not seem credible that they would be unaware of the negative consequences of U.S. policies on other countries.

I am not contesting that coming into contact with victims of structural violence can be a life-changing experience. Of course, it can change one’s perspective about war significantly and, as Morrissey says, it can make someone narrate war tragically (as the clash of morally flawed characters) not apocalyptically (as the confrontation of pure good and pure evil). What seems problematic, however, is to attribute too much explanatory power to this fact and present lack of contact as the primary reason for the pro-war position of most Christians in the United States.

Despite these questionable aspects of the major finding of the book, Christianity and American State Violence in Iraq overall makes contributions to the literature on religion and violence. First, it establishes the centrality of religion in the analysis of the Iraq war and points out the limitations of purely interest-based explanations of the war. In this regard, the chapter titled “Different Gospels: Religious Difference in America” provides useful information about how Christians in the United States make sense of the Iraq war. Second, the book provides empirical support to the importance of a person’s contact with victims of structural violence in transforming one into a war opponent. Third, the book positions itself against Samuel Huntington’s theory of the “Clash of Civilizations” and provides empirical support for the “clash within civilizations.” This is an important point, as Huntington’s theory singles out Islam as the source of violence, and Morrissey counters this perspective. As Morrissey states, “Seeing potential violence primarily in other religions stops our understanding of our common humanity and our shared frail dispositions and predilections that continue to transcend the differences of geography, culture, and religion” (p. 154). Fourth, by showing the marginality of “prophetic” voices in American Christianity, the book implies that Christians by and large will support the U.S.’ potential future military invasions. Apparently, this finding is not reassuring for those who have suffered from U.S. policies. Apart from these contributions, what stands out most in the book are Morrissey’s pro-peace normative position and his concern with understanding the suffering of the citizens of other countries. This is an admirable concern and it is highly crucial to have such “prophetic” voices, given all states’ potential to use their military power in an unjust way. All in all, chapters from Morrissey’s book can be assigned in the sociology of religion, religion and politics, and history of political thought courses, as Christianity and American State Violence in Iraq makes contributions to all of those fieldst 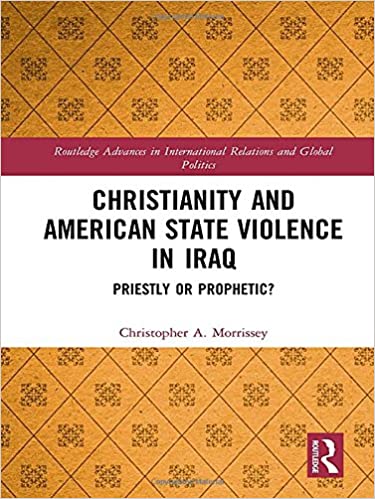