In this book, Asef Bayat explores Islam and democracy especially with regard to what he calls the “post-Islamist” movement in the Muslim world. Instead of asking whether Islam and democracy are compatible, he asks, “under what conditions can Muslims instigate democratization within their countries?”

In this book, Asef Bayat explores Islam and democracy especially with regard to what he calls the “post-Islamist” movement in the Muslim world. Instead of asking whether Islam and democracy are compatible, he asks, “under what conditions can Muslims instigate democratization within their countries?” He challenges the Orientalist view on Islamic exceptionalism by not only contesting the validity of the question about the compatibility of democracy and Islam, but also through a very thorough investigation of the post-Islamist movement in Iran and the Islamist movement in Egypt. He defines post-Islamism as a “condition” and a “project” that emphasizes change through religiosity and rights that arises after Islamism runs its course as a legitimate source of hope for political and economic development (p. 10-11). Through his in depth case studies he demonstrates that the state has been successful in suppressing the post-Islamist social movements and their secular and reformist demands for political change in Iran. While the state has been equally successful at suppressing opposition (the political Islamist movement) in Egypt, the Egyptian state has not been able to quell society’s turn to Islamism.

Bayat argues that despite the lack of a democratic transition in Iran and in Egypt, these regimes did not succeed in the suppression of the every day resistance that ordinary citizens wage against these authoritarian regimes. The book evaluates citizen participation, especially among women and youth, in order to assess their co-existence with or resistance to the authoritarian regimes. He also examines the politically oriented social movements that oppose these regimes. Ironically, in Iran, where there is a theocratic regime, the resistance takes a secular form and in Egypt, where there is a secular authoritarian regime, the resistance takes an Islamist form. He concludes that the “major challenge is to forge intellectual and social mobilization in nations with a Muslim majority in order to challenge both the authoritarian (religious or secular) regimes and the ‘fundamentalist’ opposition” (p. 188).

Despite their differences, in both Iran and Egypt, the efforts by intellectual secular reformists to achieve democratization have failed. The winners of these political struggles have been the fundamentalist Islamists and the state authoritarianism. Yet, Bayat ends on a positive note believing that through active citizenry these states may ultimately become democratic. He bases this optimism on the fact that there still exists political and social resistance to the authoritarian regimes carried out by a diverse set of actors. The book challenges the dominant interpretation of Islam and Muslims and makes a strong argument about the diversity of Muslims in life style, ideology, interpretation of Islam, and all forms of economic, social and political variables.

Bayat’s book is organized into six chapters. After the first chapter, which sets up the central argument of the book, the remaining chapters follow the historical developments in political and social movements chronologically, dividing them into different sub-groups including the youth, women, intellectuals, the clergy and political movements. Chapter two focuses on the 1960s-80s in Iran and Egypt. Bayat explains that there was a revolution in Iran and not in Egypt, which can be understood by making a “link between popular mobilization and revolutions.” In modern Iran, the policies of the Pahlavi dynasty (1925-1979) disadvantaged the clergy and some of the merchants, creating a strong group of dissidents without a mass base of support. After the revolution, the clergy with the support of the merchant middle class, was able to consolidate its power despite their lack of mass appeal. In contrast, in Egypt under the secular authoritarian regime, there was widespread Islamist activity. This was dominated by the Muslim Brotherhood in 1970s and 80s and included media operations, and educational and social services. “Thus Egypt experienced the persistence of an Islamic movement without an Islamic revolution, whereas Iran underwent a revolution without a strong Islamic movement” (p. 47).

Chapters 3 and 4 explain the post-Islamist movement in Iran that strengthened after the end of the Iran-Iraq war. While the revolution had imposed a strong public-private divide along gender lines, the post-Islamist reformists started to challenge this state imposition of religious edicts in personal behavior. Yet, unlike their predecessors in the 1960s and 70s with an anti-imperialist outlook and political goals, the new movements of 1980s and 90s lacked unity. While the reformists wanted to challenge the absolute power of the state, including the Supreme Leader and the Guardian Council, post-Islamist activities did not amount to a strong unified movement. Instead it was an intellectually diverse group of people including women, youth, students and some religious clergy engaging in acts of defiance against the regime. In chapter 4 Bayat argues that as the pro-reform government of Khatami took over, there was some relaxation of the repression against civil society and the media. Yet, the conservatives struck back severely denouncing democracy and pluralism as notions against Islamic morals. The Islamist elites had total control over political and economic institutions. The reformists were caught in a legal system that was virtually impossible to reform without conservative consent. Without grassroots support and with a growing indifference from the middle class, the reformists failed to reach their goals of tolerance and rule of law.

The fundamentalist conservative Islamist forces were among the opposition to the state in Egypt, in contrast to the state power and control they had in Iran. Chapter 5 explains that Egypt had a “passive revolution” starting in the 1990s. Bayat argues that “perhaps the Egyptian method of working toward socio-religious reform by building pervasive social movement through da’wa and associational work was what the Iranian post-Islamism needed to pursue” (p. 136-7) to succeed in changing state’s policy and power. In Egypt, Islam spread through societal means first under the leadership of the Muslim Brotherhood and Jama’a al-Islamiya. These tactically different movements initially enforced moral codes and provided social services to the poor. Following the poor, the rest of Egyptian society became more immersed in Islamist practice and moral piety in their every day life under preachers like Amr Khalid and the halaqat movement. As the Islamist ideology seeped into the public sphere through dress codes and public expressions of piety, the state was forced to incorporate Islamist ideology into state policy; otherwise they could have lost power. At the same time, the state used violent tactics to suppress Islamist movements and political parties. The state was successful in incorporating Islam and nationalism under what Bayat calls the “seculareligios” state. Even though the Muslim Brotherhood made some token gestures by speaking about pluralism and by describing themselves as “a party with Muslim membership as opposed to a Muslim party”, liberal thinking Islamists remained marginal, intellectualism was in decline and critical thinkers were silenced. While Bayat expresses hope for a new Kifaya movement that calls for a new democratic discourse, he also admits that it is too early to tell if this will make a difference at all.

This book contributes to our understanding of the relationship between different social groups and political power. It explores how groups challenge authoritarian state forces and when they can facilitate a more pluralistic democracy. By looking at two majority Muslim states, Bayat adds the relevant question of the relationship between religion and democracy. Based on his argument we can conclude that Muslims can have positive as well as negative influences on democracy and democratization, thus we cannot essentialize Islam as being incompatible with democracy. The book is rich in its discussion of the history of social movements and civil society from the 1960s to the present in Egypt and Iran. It gives a detailed account of influential groups and intellectuals. It is full of insights on the position and demands of different social movement groups and civil society organizations. Instead of treating all groups the same, he demonstrates the diversity between and even within these groups.

Yet, his optimistic conclusion is unconvincing given that both Iran and Egypt are still controlled by uncompromising authoritarian regimes. The reader is left with an uncertain understanding of the author’s conclusion. Despite the fact that the post-Islamists lost hope for change in Iran and post-Islamism never expanded throughout society as a mass movement large enough to instigate change in the Iranian regime, Bayat ends on the note that change toward a more pluralistic and secular society is still possible. The Council of Guardians vetoed the bills passed by the Iranian parliament to reform the power structure; thousands of reformists have been prevented from running for office; and what little mobilization there was among the middle class has been broken. In Egypt Bayat also ends on an optimistic note despite massive election fraud, continuing repression, and prevention of opposition Islamists from running for office. Thus in both cases the conservative Islamists and the authoritarian forces triumphed and the secular pluralist forces were defeated. Regardless of this unexpectedly positive conclusion, the book is well worth a detailed reading by scholars of social movements, religion and politics as well as Middle East area specialists. 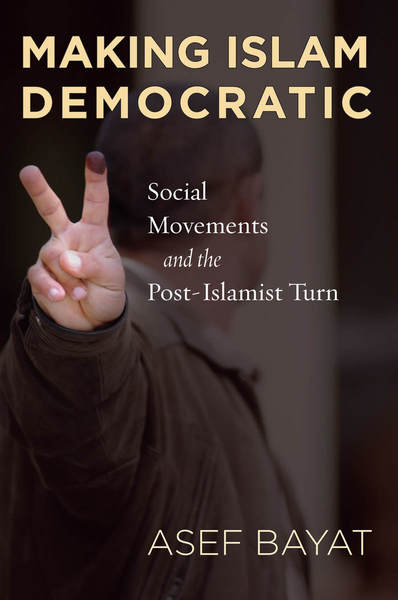 Turkey and the Arab Spring: Between Ethics and Self-Interest