In a radio broadcast in 1939 Winston Churchill defined Russia in a famous quip as ‘a riddle wrapped in a mystery inside an enigma.’ The chain of metaphors in Churchill’s famous maxim was to point the difficulty of making sense of the great political transformation Russia had gone through. 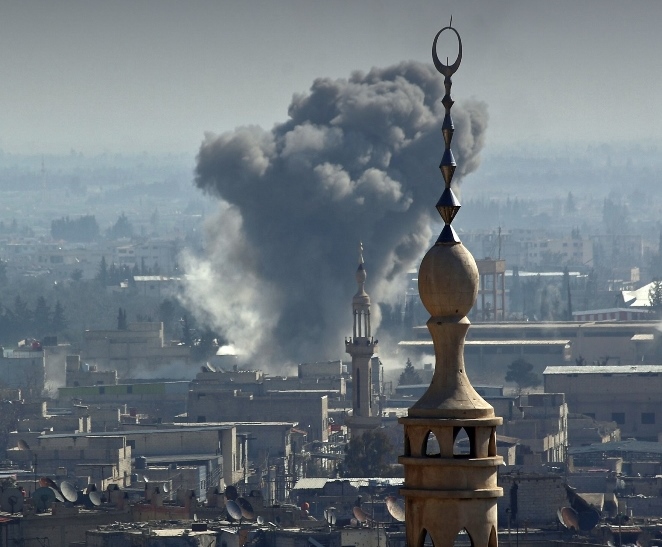 In a radio broadcast in 1939 Winston Churchill defined Russia in a famous quip as ‘a riddle wrapped in a mystery inside an enigma.’ The chain of metaphors in Churchill’s famous maxim was to point the difficulty of making sense of the great political transformation Russia had gone through. Though perplexed, Churchill had a key to solve the Russian riddle: the national interest or more precisely ‘historic-life interests.’ The ‘new Middle East’ is also a riddle inside an enigma rolled up in a puzzle mat. The former is difficult to grasp even with metaphors. The national interest is not a ‘key’ either, for it appears more of a political ploy than an analytical edifice that can hardly be applicable to the haplessly artificial regional states. The enigma of the ‘Arab Spring,’ the mystery of the ISIL, the riddle of Russian intervention in Syria and the puzzle of Turkish national interests in the Middle East are few items in the long list of explanandum.

The Middle East has often been a headline-grabber and the pressing issues frequently ignite debate and controversy. While the former is always a vague concept with no clear territorial, political or cultural borders, we have seen the evolution of even a vaguer concept: the ‘New Middle East.’ Academic studies for understanding the latter are scarce, while journalistic accounts abound, positions are advanced, and polemical exchanges often win the day. Contemporary commentaries often call for a new language to describe the perplexing state of affairs, rather than coming up with original explanations. While recent studies sometimes shed light to the new dynamics in regional politics, analyses are limited to finding different parallelism between past and present or blaming the past for what the Middle East stands for today. The popular representations or even dominant academic accounts of the new Middle East often explain it away as a source of threats and challenges. Such an attitude not only reveals an increasing sense of confusion, it also speaks eloquently to our perception of the Middle East as the new ‘Other,’ an alien region that cannot be reformed or known on its own terms, playing by its own rules and eventually challenging almost everyone in the world.

Such accounts barely capture the complex nature of the new Middle East. Rather than providing answers, they tend to generate more questions regarding the recent tectonic shifts. Although there are many different and conflicting arguments concerning the nature of the transformations in the Middle East, there appear two main lines of explanation spatial and temporal. The spatially centered explanations refer to external actors as main determinants of affairs in the region, the temporal model often resort to analogies derived selectively from historical events or turning points to account for the contemporary Middle East politics.

The contemporary Middle East faces various military interventions that have upended the regional stability and order with grave humanitarian, socio-political and military consequences. One result of the persistent power vacuum in the post-Arab Uprisings is the newly emerged violent non-state armed actors that further undermine the institutions, national ideologies, and economic structures of sovereign states. As the Arab Uprisings gave way to the security crises particularly after the military coup in Egypt in the summer of 2013 and intensification of the civil war in Syria, different types of non-state armed actors began to directly challenge the Westphalian notion of the state placing increasing pressure on the regional system with actions that weaken the region’s conventional border forms and politics. The new socio-political antagonisms and local-geopolitical conflicts in the region accelerate the exodus of millions of civilians fleeing the Syrian War into neighboring and European Union countries that is likely to change the social fabric of the receiving states. These and other concerns will continue to occupy the agendas of international, foreign and domestic policy making circles and political elites as well as other social actors in the Middle East.

The aforementioned transformations have not only challenged the regional and global political decision-makers but the existing scholarship as well to develop new approaches that can help to understand and explain the recent developments. There is a need for alternative approaches that put the analytical and theoretical foci on such pressing issues as the emergence of violent non-state actors, proxy wars, new terrorist states, societal insecurity and socio-economic repercussions of sectarian radicalization and migrant outflows. There also continue to be dramatic changes taking place in the Middle East following the Arab Uprisings, such as the deepening of the Sunni-Shi’a division which has manifested itself in the spread of sectarian conflict from Iraq and Syria to Yemen. As for the socio-economic sphere, the youth demands for its proper share of economic dividends in the face of soaring unemployment rates that helps to drive the rise of extremist religious groups and a new wave of warring social groups unsatisfied with the current state of affairs yet unable to change their immediate situations. Whereas four states failed (Syria, Iraq, Yemen, and Libya), non-state actors stepped in to fulfill the need for a social contract long neglected by the states of the region. Responding to such a rarely goes well with theoretical and conceptual clarity.

The present issue of Insight Turkey offers a collection of articles responding to a highly topical agenda including the political and social transformations in the region. In particular, the present volume seeks to address the question of what is new in the New Middle East and how to address the new and enduring challenges in the region. While it acknowledges and addresses differing views and outlooks on the Middle Eastern politics, the unifying thread is to reject easy categorizations of regional developments. This issue aspires to show that addressing the ‘new’ in the New Middle East means scrutinizing beyond the confines of limited and ethnocentric accounts. The macro and micro level transformations in the region necessitate scholarly as well as public discussions to better understand the basic contours of the ruptures and continuities in the Middle East.

Six commentaries and seven articles animate this issue to contribute to our understanding of the new dynamics and reconstitutions observed in the last five years or so following the Arab Uprisings and its complex political consequences. In the first article, The New Middle East, ISIS and the 6th Revolt against the West, Murat Yeşiltaş and Tuncay Kardaş scrutinize the ‘new’ in ‘the new Middle East.’ They argue that the ‘new’ in the Middle East is a revolt against the West that is underway challenging the dominant values of Western statehood and personhood. The paper identifies the said novelty in the politics of radical antagonism, apocalyptic geopolitical imagination, the re-birth of extra-territorial subjectivities and the politics of resistance, which together shatter the existing political logos.

Oğuz Dilek discusses the process of authoritarian bargain developed in the post Arab Spring in the Middle East by focusing on the cases of Tunisia, Egypt and Syria. He emphasized the fact that casting aside the authoritative regimes not necessarily conveys that those societies are democratizing. Nonetheless, achieving a political stability that would lead to democracy would require first of all economic stability, away from the intervention of IMF or WB, but not exempting it from the wider global system. Similarly, Taner Akan considers the Arab Spring as an outcome of the accumulated dynamics of change originating from the institutional failures of the fragmented regimes. Based on the principles of Islamic Political Economy, Akan addresses the possible trajectories in the MENA region by particularly focusing on the high-income Gulf countries, the upper-middle income Tunisia, and the lower-middle income Egypt.

Wayne McLean and James Dwyer bring another perspective to the debate of the New Middle East by focusing on the Turkey’s alternative security orientations. Layne and Dwyer explore the impact of regional instability and advances in military technology to analyze three future avenues for Turkey’s strategic planners. In his article, Berdal Aral attests that Turkey’s foreign policy has been driven by ethical and moral concerns since AK Party came to power in 2002. Hüsrev Tabak discusses in his article gives a detailed picture which shows how a humanitarian organization such as IHH in Turkey has emerged as a very successful mediator in intra-state conflicts. In this sense, he argues that the proactivism in Turkey`s contemporary foreign policy is confidently shared by IHH. In the last article, with the main focus remaining in Turkey, Zeynep Şahin brings the attention on a relatively new process, the voting of Turkish expats from their residing states which allows them to be a part of the Turkish politics.

The commentaries of this special issue focus on the latest issues in the Middle East such the Iranian nuclear deal, civil-military relations in the region, Kurdish and Palestinian issue and the America’s counterterrorism policy. Christopher Layne and Richard Jackson draw attention to the American policies in the Middle East asserting that America repeatedly does the same mistakes which among all have resulted in a dwindling effectiveness of its policies. While Layne strongly argues that Bush’s intervention in Iraq is blameworthy for the current quagmire in the Middle East, Jackson suggests that a new counterterrorism discourse is imperative in order to have a political solution rather than trying to solve it with the use of force.

Norman Finkelstein et al. and David Romano concentrate on Palestinian and Kurdish issue respectively. Finkelstein et al. imply an optimistic future for Palestine; however, they maintain that the Arab support for the Palestinians has been truncated. On the other hand, Romano analyses the Kurdish movement and the impact of the current international events in its mobilization in the regional level. Furthermore, he asserts that while the respective central governments should take in consideration the Kurdish preconditions, the Kurds on the other hand should moderate their demands.

Mohammed Ayoob considers the aftermath of Iranian nuclear deal in the region and asserts that U.S. and Iran are not anymore the old nemesis; nonetheless, it may not be so propitious for other regional actors such as Saudi Arabia or Israel. Lastly, Omar Ashour presents one of the main elements of the new Middle East, a political violence which Arab Spring was unable to prevent. On the contrary it resulted in the proliferation of political violence perpetrate by both states and non-state actors.

In conclusion, it can be asserted that preexisting political and humanitarian problems have only been exacerbated by the Arab Spring. Political violence, failed states and other concerns will continue to occupy the political agenda of global and regional actors; nevertheless, there is a need for awareness from all the actors which would lead to a possible political solution of the situation.