McMillan starts his narrative with the method of succession from one Guided Caliph to another. The convening of shura to decide the Caliph in the early period of “Rightly Guided Caliphs” contrasts starkly with the later period, when the method of consultation is abandoned for patrimonial rule. The consequence was that “the caliphate would no longer be a community of the faithful but a kingdom like any other” (p. 23). McMillan traces the history of militaries as the backbone of regimes in the modern Arab world to the period of Umayyad rule as well. It was “army officers wedding themselves to their rulers” that created the authoritarian stability in the region after the 1960s. The author reminds us that “this welding of a loyal army to an elite ruling family [during Muawiya’s rule during the Umayyad] became the bedrock of a political model” (p. 26).

The modern period since France’s invasion of Egypt not only brought entirely new forms government such as kingdoms, which had never existed in the Arab world (p. 108), but also new ideologies such as nationalism, liberalism, and later socialism. The most critical of all was the adoption of the political language of Europe. This novelty forced invention of new Arabic words corresponding to new European concepts such as ‘nation’ and ‘constitutionalism.’ For in the classical periods, “theirs [the Arabs] was a world without borders of nationality or language” (p. 151). However, the making of new words was at times done at the expense of distorting the meanings of age-old concepts. The concept of ummah illustrates this point well. Since Arabic did not originally have a word to denote ‘nation,’ early Arab nationalists twisted the meaning of ummah to make it mean ‘nation.’ As Talal Asad pointed it out,

“The Islamic umma in the classical theological view is thus not an imagined community on a par with the Arab nation waiting to be politically unified but a theologically defined space enabling Muslims to practice the disciplines of din in the world…The fact that the expression umma ‘arabiyya is used today to denote the ‘Arab nation’ represents a major conceptual transformation by which umma is cut off from the theological predicates that gave it its universalizing power, and is made to stand for an imagined community that is equivalent to a total political society, limited and sovereign like other limited and sovereign nations in a secular (social) world.”1

An important issue McMillan raises is the reign of illusory ‘stability’ in the Arab world from the 1970s onwards, after an era of coups in Iraq, Syria, Egypt and Algeria.2 The author deserves credit here for underlining patronage, social policy, and power of coercion (p. 117-119) as factors contributing to the authoritarian status quo, instead of resorting to any cultural explanation such as Arab or Muslim exceptionalism. Bellin pointed to the role of coercive apparatus earlier: “the solution to the puzzle of Middle Eastern and North African exceptionalism lies less in absent prerequisites of democratization and more in present conditions that foster robust authoritarianism, specifically a robust coercive apparatus in these states.”3 Apart from these strategies, however, the new rulers, once-coup plotters such as Hafez Assad or Saddam Hussein, knew how to make their regimes coup-proof, a matter McMillan passes over. Once they took the helm, Assad and others like him used five measures to thwart coups: they exploited family, ethnic, and religious loyalties for coup-critical positions; created parallel armed forces to check on the regular military; developed multiple internal security agencies to cross-check each other; fostered professionalism in the regular military; and allocated money for these purposes.4

Perhaps one of the most significant yet little studied aspects of Middle Eastern politics is the politics of prayer, meaning the relationship between religious institutions and state. Although such seminal religious institutions, such as the al-Azhar in Egypt and the Directorate of Religious Affairs in Turkey, are controlled by the state, there are probably only a handful of systematic studies on trials and tribulations of that relationship over the last century. McMillan rightly broaches this subject towards the end of his book in a section entitled “Power and Prayer.” Prayer, especially the Friday prayer, has never been solely about serving or fulfilling one of their duties toward God for Muslims; it has also been a political act, a way of showing opposition or professing obedience. As the author points out, “in the days before mass media and digital communications, Friday prayer was where people swapped information and news” (p. 145). From the time of the Umayyads, when the Umayyad family exploited the potential of Friday prayer to curse the Fourth Caliph, the Prophet’s cousin Ali, to our modern times with the Arab peoples’ mobilization on “Friday of rage” and “Friday of anger,” the prayer has carried immense political potential. The potential of mass prayer has been tapped into so often by Egyptians, Tunisians, Syrians, and Libyans in the last three years that, McMillan tells us, a new Arabic proverb has been coined: “Arab dictators don’t like Fridays” (p. 156).

All in all, Fathers and Sons, free from the scholarly jargon, provides a succinct narrative of the Arab world that can be read in one sitting. As such, it will help the general reader make better sense of the rise and fall of patrimonial rule in the Arab world and the dynamics of the Arab revolt. 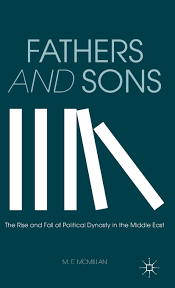