The Westphalian process and the subsequent Reformation and Enlightenment periods put a distance between religion and political science in Western thought for more than 300 years.

The Westphalian process and the subsequent Reformation and Enlightenment periods put a distance between religion and political science in Western thought for more than 300 years. Although religion more or less continued to affect politics, political scientists chose to ignore the subject until 9/11 which proved that turning a blind eye to God in politics means missing a critical variable when analyzing political events in domestic and international arenas. The result was, as Petito and Hatzopoulos famously stated, religion’s “return from exile.”2 Since 2001, the number of books, articles and journals focusing on the relations between religion and politics have significantly increased, yet most of these publications analyze religion’s effects on politics, and mainly from a security perspective.

In From Politics to the Pews, Margolis attempts to reverse this causation dynamic by taking politics as an independent variable and analyzing how politics, more specifically “individuals’ partisan identities,” shape “their identification with and engagement in the religious sphere.” Taking religion as a “social phenomenon” instead of a given variable, Margolis argues that individuals’ religious identity is socially constructed by their already-formed political identities. Relying on “life-cycle theory,” Margolis points out in chapter three that individuals’ partisan identities are shaped and solidified in adolescence and early adulthood when they put a distance between themselves and religion for any number of reasons, including new roles and responsibilities, the wish to be independent from parents, and the practice of inappropriate behaviors opposite to religious values. In these “impressionable years,” on the other hand, long-term political outlooks and partisan identities are constructed as a result of a political socialization process that comes from the home and broader political environment. Yet, Margolis shows, a person cannot remain outside of religion forever. When individuals form families and have children in school, they may make religious choices for themselves and their children as they seek a community and support. Once adults return to religion in this period, their religious identity typically remains constant for the rest of their life.

Why is it important that partisan identities are shaped before religious ones? Because of the politicization of American churches since the 1960s. In chapter two, Margolis explains the social and political upheavals that occurred in the 1960s and 1970s during which the U.S. witnessed “a dramatic shift in societal values, the emergence of new political issues, the entry of religious elites into politics, and the adoption of new religious strategies by politicians.” Family values, the issue of abortion, drug use, prayer in school, etc. were hotly discussed in politics in the following decade, and this situation forced political parties to take a stance on religious issues. Meanwhile, religious groups, which had been politically indifferent since the Scopes “Monkey” trial of 1925, looked for political elites who agreed with their religious stances. This process resulted in the so-called “God gap” between Republicans and Democrats when the former, under the Reagan Administration, solidified ties between the Republican Party and religious groups. In the following years, religious Americans joined the Republican Party’s ranks while less religious and more secular individuals supported the Democratic Party.

Combining these two phenomena, Margolis challenges the conventional argument that religion produced the “God gap” in the United States. Instead, by pointing out that partisan identities are shaped long before religious identities, she argues for the opposite causation: partisanship pushes people in or out of churches and religion. Republican people go to church because the sermons and community there fits in with their political values, while supporters of the Democratic Party stay out of religion since they equate the church with the Republican Party’s values. In chapter four, Margolis measures the level of partisanship and church attendance among a student cohort in 1965, 1973, and 1982, to seek any difference in peoples’ religiosity and partisanship. She finds that while both Republicans and Democrats became less religious in young adulthood, Republicans were more likely to return to religion later relative to Democrats. Chapter five attempts to explain how the political environment shapes religiosity in a shorter period of time, between 2000 and 2004, when some issues such as gay marriage and abortion became political issues. Margolis shows that party identification affects peoples’ attitude toward religion when moral issues make headlines, as Republicans’ rate of religiosity increases while Democrats stay away from the church.

Chapter six analyzes the role of political knowledge in the God gap and finds that party identification affects religiosity in one way or another when people are more politically engaged, while individuals with little political information do not update their involvement in religion in accordance with their political choices. This chapter also discusses how the political identity of churches plays a role in the religiosity of individuals. For example, if Democrats join in a liberal-minded church, their partisanship do not necessarily decrease their level of religiosity. Chapter seven is one of the most interesting parts of the book as it analyzes an anomaly in American politics: African-Americans who both identify with Democrats and are frequent churchgoers. Margolis argues that the theology of Black Protestant churches, their history, and political ideology within this group explains why African-Americans’ religiosity does not contradict with their propensity to vote for the Democratic Party. Chapter eight is equally interesting, as Margolis tests her theories in a different political environment, namely the 1960 elections, when the relationship between political parties and religion did not exist. Still, religion played a critical role in this election as John F. Kennedy’s Catholic identity was a politically salient issue. Indeed, Margolis argues that individuals’ political identity –being a Kennedy or Nixon supporter– affected how they approached religion. Just as being a Democrat or Republican played a role in peoples’ participation in their respective churches during the election period: “Republican Protestants became more frequent church attenders compared to Democrats Protestants, while Catholic Republicans became less religiously involved over time compared to Catholic Democrats.”

The strongest feature of the book is Margolis’ attempt to prove her theories through extensive statistical measures, which test the effects of several variables including age, race, geography, and financial power. From chapters four to eight, Margolis successfully shows that life-cycle theory and partisan identity’s effect on religion explains the “God gap” in American domestic politics. Her explanation of the religiosity among the Democratic African-American population and examination of the 1960 election is also interesting and satisfactory. Yet, there are some problems in the study. For example, although Chapter 9 deals with the political implications of Margolis’ findings, it is not extensive enough to highlight the importance of these arguments in American politics. Her overreliance on scientific measures seems to prevent or diminish the potential for contemporary political discussions of the subject. As the book is based on Margolis’ dissertation, this is understandable, but when the dissertation was edited into book form, a discussion of the implications for modern political life could have been included. A more detailed discussion about the political effects of the God gap, its potential influence on American domestic and foreign policies, and especially what policies the Democratic Party should follow to remove the “God gap” –as it mainly affects the balance of power to the detrimental of this party– would have gone a long way to enriching the arguments of the book.

Moreover, Margolis analyzes only one case in this book –the United States– which limits the power of her theory to really explain the relationship between politics and religion. Margolis does acknowledge this limitation of her work and explains that her study attempts to explain only American politics and only the religiosity of partisans –though she argues that religiosity of non-partisan people also shows the same characteristics. We can definitely appreciate Margolis’ attempt to take the first step in showing the effects of politics on religiosity, yet her life-cycle theory may not be successful in explaining religiosity in other countries. For example, in Islamic terms the religiosity of a Muslim starts when a child reaches puberty, during which time political knowledge has not been shaped. Therefore, although partisan identities may shape religiosity in some countries –such as Turkey– we cannot explain this with life-cycle theory. This may lead us to look at other variables such as social identity formation, especially the family environment. And Margolis is not really successful in discrediting the importance of family environment in identity formation. For example, she argues that the wish to be independent from family plays a role in individuals’ putting a distance between themselves and religion during early adulthood, while she maintains that family plays a role in the formation of partisan identities during the very same period. This seems to be a major contradiction that the author fails to address.

Nevertheless, From Politics to the Pews is an important theoretical contribution as it reverses our understanding of the relationship between religion and politics. If other researchers extend the scope of this argument, explain the political implications of political identities’ effects on religiosity and clarify some theoretical arguments, this book will constitute an important first step to explicate a controversial issue in American politics. 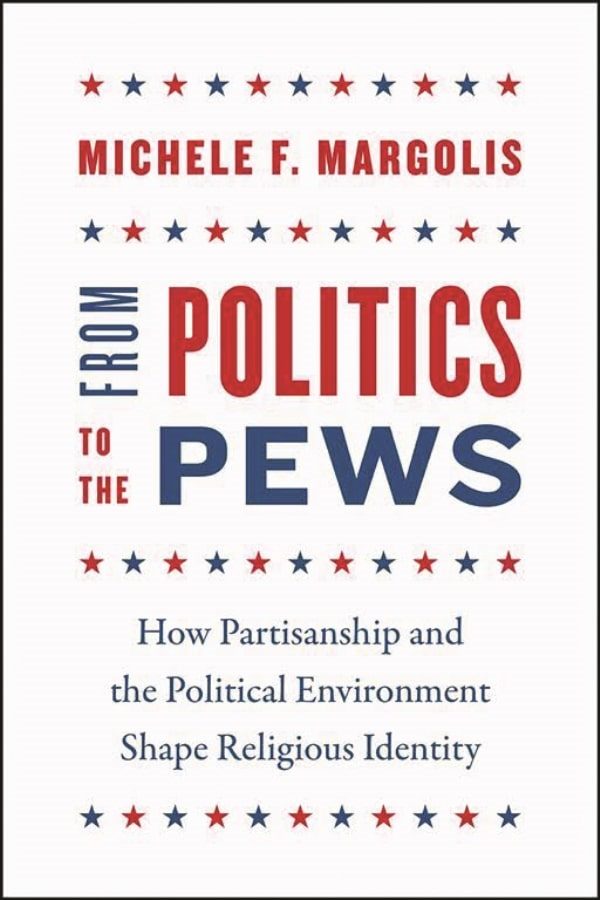 The Shape of the New: Four Big Ideas and How They Made the Modern World

Muslim Democrats in Turkey and Egypt: Participatory Politics as a Catalyst