With the rising new wave of religious-phobia in the world, understanding what lies behind the phenomenon of religion has never been so important. As the propagators of this form of religious neo-racism,1 grow in power and increase the sphere of influence of their often misguided rhetoric on religion, it is important to take a step and look at what religion itself means, how malleable yet fragile it is, and just how different it is to what the otherwise aforementioned arbitrary rhetoric claims it to be.

With the rising new wave of religious-phobia in the world, understanding what lies behind the phenomenon of religion has never been so important. As the propagators of this form of religious neo-racism,1 grow in power and increase the sphere of influence of their often misguided rhetoric on religion, it is important to take a step and look at what religion itself means, how malleable yet fragile it is, and just how different it is to what the otherwise aforementioned arbitrary rhetoric claims it to be. Intended as an undergraduate level guided reading/textbook, Religion in Today’s World by Melissa Wilcox aims to bring down the sociology of religion from an “ivory tower subject” (p. i) usually only taught upon interest in undergraduate studies, to a more approachable discipline of sociology as a whole. In addition to providing readers, whether they be students or interested individuals, with a structured presentation of how to understand religion and its relation to society, by also delving into the relationships between religion and social institutions, social power, social movements and religion on the local and global level, the book furnishes its readers with a foundational conceptualization of religion in society, allowing them deeper and better perceived judgments in the future.

Divided into five sections, the first section of the book entitled “What is Religion?” tries to define religion and provide a prediction as to its future through classical writings on the sociology of religion. Aiming to set the foundation upon which the rest of the book will build, it consists of works from various leading authors on religion, such as Talal Asad, Stephen Warner, and Peter Berger. This section’s primary aim is to break the mold of the traditional definition of religion from that of the official and formal practiced religions of the world, to one that is understood to be much more culturally constructed and continuously shaped due to the malleable nature of how it is lived. The next logical step is then to delve into the debate on secularization vs. sacrilization, which is exactly what this book does by presenting multiple pro and con arguments for a true and clear understanding of the argument. Next, the book aims to analyze the relationship between religion and social institutions, as the section itself is aptly named, by looking at religion in terms of the state, the law and the nation by providing case studies from the Chinese state and Buddhism, post-socialist Central Asia and Islam, Japan in the early twentieth century, and civil religion and militant religiosity in the United States.

The next two sections of Religion in Today’s World, entitled “Religion and Social Power” and “Religion and Social Movements” respectively, starts off with one of the most important classical texts on religion for anyone trying to make a connection between religion and social power and movements: Karl Marx’s statement on religion in his Contribution to the Critique of Hegel’s Philosophy of Law. Before going into specific cases and examples works by the acclaimed W.E.B Du Bois and Lara Medina come, in order to set the theoretical framework behind religion and power. The first of these two sections then follows with incredible and unique case studies showcasing just how various societies have been able to enact their group power in the face of religious discrimination or suppression, or vice versa. Some of these examples include the lives of Muslim women in Egypt in terms of the oppression the Western feminists view them under versus the authority these women claim they have and how a Haitian-American family behaves in the face of state racism and xenophobia, as well as essays on social power within Christian and Jewish communities. The next section builds upon the arguments of the previous by presenting case studies of the role of religion in social movements in addition to religion as social movements. The examples are quite contemporary and analyze how religion is used by communities in their battles against the law and the state, in often legal settings, such as Russel Jeung’s essay on how religion served an organizational purpose for social justice in San Francisco. In addition, they show the inter-workings of religious communities that are otherwise saturnine to the general population, such as the ultra-orthodox branch of Hasidic Judaism and new religious movement of the Church of Satan.

But perhaps it is the last section of the book entitled ‘Religion, Local and Global’ that is the most important in truly understanding religion in today’s world of increased globalization and decreased boundaries coupled with the increased visibility and activity of religious extremism. A direct result of the increased globalization in the world is the eradication of the importance of boundaries and the movement of ideas, people, cultures and, as expected, religions. The first half of the section, the essays chosen are on this transnational nature of religion, migration and communities practicing their religion in ‘other’ countries. This then transitions into the relationship between religion and violence on the local and global level from a framework other than simply religious extremism and terrorism but from a truly sociological perspective instead. Example case studies include religiosity and domestic violence, transnational transmission of the Holocaust Trauma, and a critique of the easiness with which religion and violence are associated despite the fragility of the argument’s defense.

The book goes about its aim to equip its readers with the proper foundation for further educated judgments on religion, by presenting a total of five sections made up of 32 essays comprised of both classical and contemporary sociological texts, and each section preceded by an introductory essay by Wilcox. Despite the fact that each of these essays were written independently of each other, as narrated above, the analytical rigor is in such a way that every section builds upon institutional frameworks, narratives and examples introduced or analyzed previously to create one cohesive text. What makes this book so current is that alongside the classical and what can be called as ‘mainstream’ interpretations of religion it juxtaposes critical evaluations and arguments including opposing opinions as well. By presenting the sociology of religion through a new framework constructed by numerous perspectives on the subject, deriving from the plethora of exemplifying case studies from across the world, Wilcox altogether presents her readers with a new contemporary understanding of religion in today’s world. 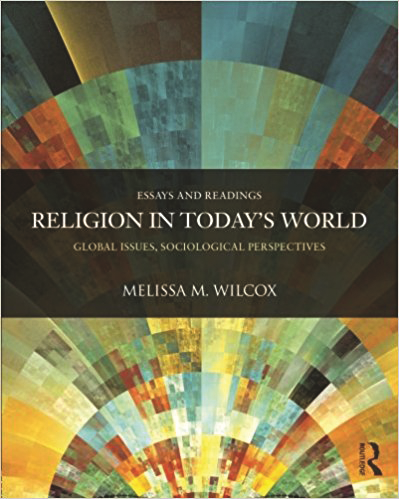