German-Turkish relations in the twentieth century were at times very good and very close, at times cold, semi-colonial, and often difficult, but always complex and never black and white.

German-Turkish relations in the twentieth century were at times very good and very close, at times cold, semi-colonial, and often difficult, but always complex and never black and white. Even when relations were friendly, as before and during World War One, the German side often tried to dominate the Ottoman Empire in some way which led to resentment among those who became aware of this—most prominently perhaps Atatürk. And at times when interactions between the two peoples seemed to focus prominently on such aspects as education and academia, as during the National Socialism period when a number of German academics found a temporary home in Turkey, some Germany were not happy about this new kind of closeness between the two peoples. A good history of German-Turkish relations still needs to be written, and there is much to disentangle and uncover until then, but this edited volume by Şen and Halm is another step towards a better understanding of this highly entangled history and inserts itself into the ever growing body of literature on the subject.[1]

This volume revolves around the report of Herbert Scurla, who was sent to Turkey by the Nazis in May 1939 to investigate the activities of the German academic émigrés there. Although not true for all, the great majority of the German academics in Turkey had gone there as a direct result of Nazi persecution. The 60-page report is reprinted here, along with an introduction by Klaus-Detlev Grothusen as well as a critical analysis of it by Fritz Neumark. The report as well as the two essays were already published once in 1987.[2] The new edition is enhanced by the inclusion of an article by Christiane Hoss tracking the paths of emigration and persecution of those mentioned in the report, an article by Faruk Şen on the academic landscape in Turkey today, as well as a documentational appendix including, amongst others, a reprint of the questionnaire the German emigrants to Turkey had to fill out. The fact that each edition of the Scurla book is introduced by a prominent German politician—in the 2007 edition it was the current Foreign Minister Frank-Walter Steinmeier and in 1987 it was then President Richard von Weizsäcker who spoke to the readers through an excerpt from one of his speeches—shows that this seemingly historical, perhaps even marginal topic, is of great political interest even today. In 1987 the Scurla book was inserted into the German guestworker debate and in 2007 it added a perspective to the continuing EU-Turkey debate. As a sub-section of the history of German-Turkish relations, the study of the “haymatloz-emigration”,[3] the emigration of German refugees to Turkey in the time of the Third Reich, has flourished in the last decades.[4] It serves to show that there is a different Turkey, a Turkey which has helped Germany, a Turkey which has shown humility and provided a safe-haven in times of national and European disaster and darkness. As a result of this focus some of the haymatloz literature exhibits the tendency to be slightly uncritical of the relationship between the two countries at the time. Given Turkey’s difficult position during World War Two on the one hand and its overall rather pro-German politics at the time on the other, this period is much more multi-faceted than this volume and others suggest.[5] Unfortunately this singular focus in scholarship obscures many other important aspects of GermanTurkish relations, even positive ones. Thus when the editors write that the “roots of German-Turkish university cooperation... lay in the darkest periods of the German past”, they fail to acknowledge that German professors had been in Istanbul even before World War One and that the project of a German-Turkish university, which is discussed again today, was first envisaged shortly before that war The Scurla report is an important document. It illustrates how a Nazi saw Turkey, Turkish university life, and the work of the German professors there. It provides valuable information on the composition of the German academic emigrant communities in Istanbul and Ankara, the emigrants’ backgrounds, the conditions under which they worked, and what kind of problems they were facing. Scurla also describes the reforms that had taken place in Turkey and how the universities and faculties he visited functioned. The chapter by Hoss, which traces the biographies of the individuals mentioned in the report, make this book an especially fascinating read. She uncovers why these academics had left Germany, what they did in Turkey, and their fate after World War Two. Many of these biographies illustrate the extent to which many individuals retained connections to Turkey even long after their stay there had ended. And except for their partially biased discussion of the controversial person of Herbert Melzig, author of a biography of Atatürk,[6] the chapters by Neumark, Grothusen, and Hoss guide the reader critically and well balanced through the report, its background and the topic in general. As an additional piece of historical background the volume includes pictures of Ankara University taken by one of the German academics, Otto Gerngroß. His photo album, from which 27 pictures are reproduced here, bore the fitting title “Research and Teaching under the Protection of Crescent and Star.” The documentation and discussions in Şen and Halm’s volume add superbly to Arnold Reisman’s study “Turkey’s Modernization—Refugees from Nazism and Atatürk’s Vision”, which was published in 2006. 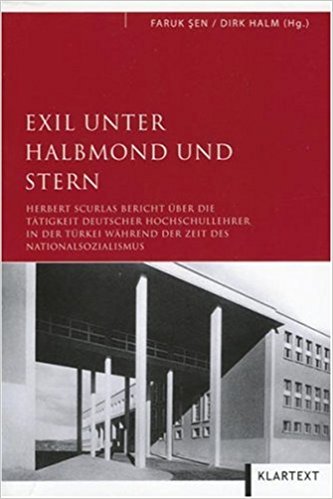