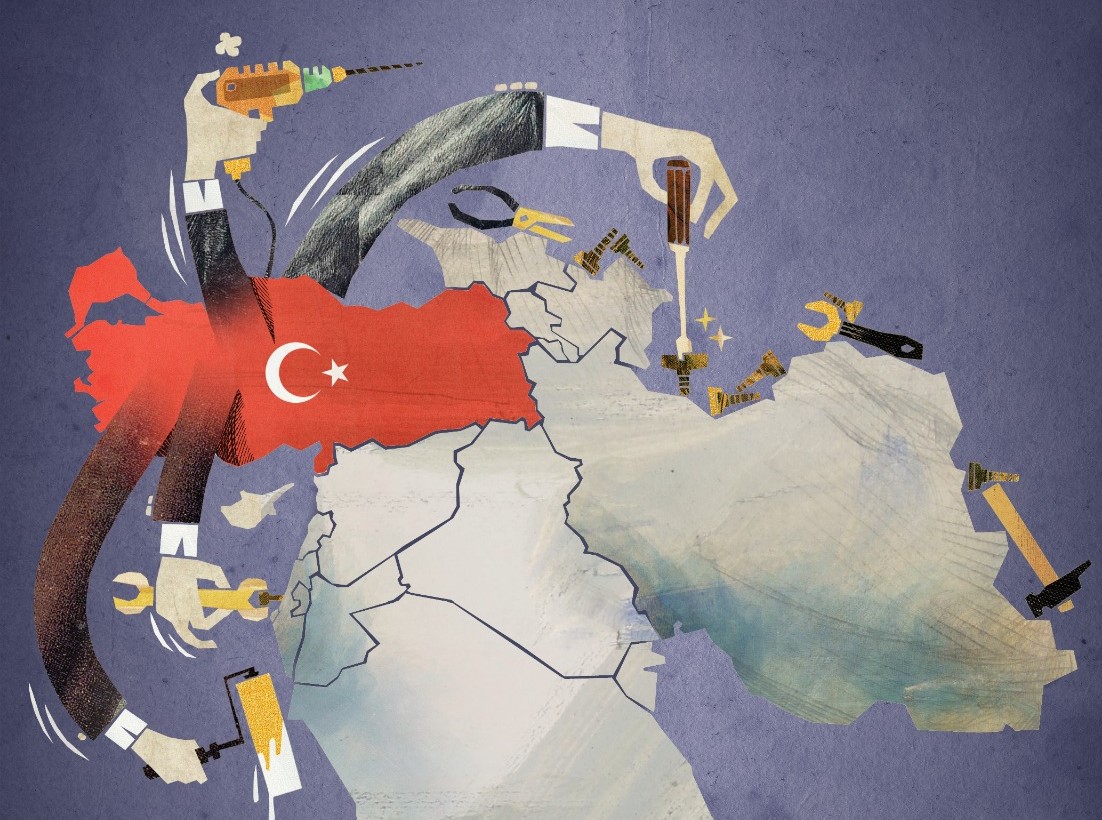 This large-scale change in Turkish foreign policy, during the governance of the AK Party, has led the state leadership to search for reformulation of the Turkish grand strategy. To achieve an influential role in international politics, Turkey has transformed its foreign policy orientation, which can be analyzed within three complementary contexts, namely national, regional, and international/global.

First, Turkey has been experiencing groundbreaking changes in the national context. Under the leadership of Recep Tayyip Erdoğan there has been long-term political stability, which allowed Turkey to take significant steps in foreign policy. The strong personality of President Erdoğan provided a convenient atmosphere to execute effective leadership diplomacy. Especially after the military coup attempt on July 15, 2016, Erdoğan has reformed the state structure by ending the traditional bureaucratic tutelage and consolidating the civilian and political administration. After the reconciliation between the state and the people, the greatest transformation was made in the redefinition of the responsibilities of Turkish security. The Turkish national intelligence and the armed forces have abandoned their inward-looking perspective and begun to act as real foreign policy actors. This redefinition has increased Turkey’s hard power in the execution of foreign policy. Furthermore, newly established state institutions such as the Turkish Cooperation and Coordination Agency (TİKA), Presidency for Turks Abroad and Related Communities (Yurtdışı Türkler, YTB), Yunus Emre Institute, and Disaster and Emergency Management Presidency (AFAD) have provided an enormous soft power capability for Turkey.

During the last two decades, Turkey has greatly developed its defense industry, which is one of the preconditions of following a relatively independent foreign policy. Turkey has begun to produce most of the ammunition, weapons, and especially the unmanned combat aerial vehicles (UCAVs), required for its struggle against terrorism and for deterring external threats. The production of native UCAVs such as Bayraktar TB2, Bayraktar AKINCI, TUSAŞ ANKA, and Vestel Karayel, Turkey has increased its military effectiveness both in its struggle against terrorism and in different regional crises such as Syria, Libya, and Nagorno-Karabakh and now has the capacity to act alone and to pursue an Ankara-centered independent foreign policy.

Second, Turkey has been seeking effective leadership in the regional context and is determined to eliminate vital threats emanating from non-state actors beyond their borders. Turkey has carried out four effective military interventions into the north part of Syria followed by efforts to improve its cooperation with both immediate and remote neighbors. It has established strategic relations with some regional countries such as Libya, Qatar, and Somalia while starting to take initiatives and thus has emerged as a regional game-changer in the region. It effectively reacts to regional projections of regional and global powers (Iranian and Israeli expansionism, destabilization efforts of Saudi Arabia and the United Arab Emirates) on the one hand and develops its own regional projects on the other. One of the most important priorities of Turkey is regional stabilization. Therefore, it has been following an active and non-sectarian regional policy.

Third, Turkey has been seeking a high level of autonomy and global status. The country has been asking for the restoration and reformation of the global system. On the one hand, it invites the West to respect its own values and principles. On the other hand, it demands a more just and more inclusive international system, for example asking for the reformation of international institutions such as the United Nations. One of the main indications of Turkey’s new political discourse is the motto crafted by Turkish President Erdoğan “The World Is Bigger than Five.” Turkey desires more autonomy in international relations and therefore it developed a multi-dimensional, sectoral, and diversified foreign policy orientation. For this reason, it tries to improve its relations with all global powers representing different political perspectives such as the U.S., Russia, and China. In order to extend its outreach to and initiate new openings in other parts of the world, Turkey has been providing humanitarian and developmental aid to many countries and thus is increasing its soft power worldwide. In other words, it is trying to be one of the global players and to set the global agenda. Therefore, Turkey has been trying to be active in all related regional and global international organizations.

All in all, Turkey has been working to materialize its grand strategy at three different layers, namely the quest for an independent and Ankara-centered based foreign policy understanding, the quest for regional leadership, and the quest for an autonomous and effective global status. Turkey has recently taken many critical measures by increasing its soft power through which it provides humanitarian and developmental aid worldwide, its hard power by developing its national defense industry and military interventions to regional crises, and its productivity power with the successes in industrial and technological sectors.

Taking all these developments into consideration, this new issue of Insight Turkey focuses on the transformation of Turkey’s grand strategy. Three commentaries and six articles will help the readers to understand better Turkey’s current position at a regional and global level.

In the light of the changes the international system has gone through, Hasan Yükselen’s article explores the ill-suited features of mainstream debates and theorizing from a Turkish perspective. Yükselen argues that Turkey has a long pursued grand strategy, but new concepts can enhance its ability to strategize and can enrich the recently emerged vibrant debates exploring Turkey’s grand strategy.

The analysis of Turkey’s grand strategy would be incomplete if no special focus was put on its bilateral relations with global or regional actors such as Russia, Middle East North Africa (MENA), and African countries.

Alperen Kürşad Zengin and İlyas Topsakal explain the common aspects of the grand strategies of Turkey and Russia. This piece evaluates the policies of both countries in Syria, Libya, and the South Caucasus where the interests of both intersect and occasionally conflict.

Today, soft power plays an important role in advancing states’ foreign policy goals and Turkey pays special attention to the development and maintenance of its soft power. Ali Omidi’s commentary uses a descriptive-analysis approach to address the components of Turkey’s soft power in the MENA region in the years 2011-2020, the second decade of AK Party governance.

Turkish-African relations have consistently exhibited strong growth since Ankara declared 2005 as the year of Africa. In this regard, Abdinor Dahir’s commentary argues that Turkey’s growing footprint in Africa will likely continue to produce positive results for both sides.

Within the same scope, Abdennour Toumi examines how Algeria-Turkey’s ambitious strategic rapprochement will affect France’s Sahel policy. The commentary reviews the ongoing diplomatic tensions between Algiers and Paris following President Emmanuel Macron’s cutting back on visas granted to Maghreb citizens and his comments on the existence of an Algerian nation before the French invasion and later colonization in 1832.

In terms of economic diplomacy, Kaan Yiğenoğlu investigates the Turkey-UK free trade agreement which came into force in 2021. Yiğenoğlu analyzes the economic relations between the two countries and examines the details of the agreement in the context of the changes that it provides.

This issue of Insight Turkey, through off-topic pieces, covers very significant issues related to Karabakh War, Gulf rivalry, and developments in the Balkans.

Examining the attitudes of international actors during the 44-day Karabakh war is important as they affected the international balances in the Caucasus. Nazim Jafarov and Araz Aslanlı focus on Russia’s attitude as it was of special importance. The article carefully examines the policy followed by Russia during and after the 44-day Karabakh war and its main and parallel pillars.

By focusing on Turkey as a rising drone power, the role and impact of Turkey’s military support, especially its drones, on Azerbaijan’s Nagorno-Karabakh victory is highlighted by Hülya Kınık and Sinem Çelik. This article argues that Turkey’s political, diplomatic, and military contributions to Azerbaijan will likely be discussed on the global agenda for years to come.

With regard to the recent developments in the Gulf, Mustafa Menshawy and Simon Mabon’s commentary argues that the Saudi-Qatari tensions lie in conflicting perspectives about the role of political Islam within the fabric of both states and their actions regionally. Menshawy and Mabon believe that the rivalry stems from contrasting relations between political and religious elites in each country which has taken on increasing political importance in tensions between Riyadh and Doha.

Meanwhile, Mehmet Rakipoğlu’s commentary focuses on another dimension as he provides an analysis of the role of the Gulf over the Sudanese transition period concluding that the UAE and Saudi Arabia, using petrodollars as a tool, are directly engaging in Sudan’s transition period.

Kemal İnat and Melih Yıldız in their article discuss the rise of China in the light of economic and military data and what the challenge from China means for the global leadership of the U.S. In this context, an answer has been sought to the question of what will be the consequences of the rise of China in terms of the international political system.

The last off-topic article written by Andrej Semenov analyzes the Washington Agreement (WA) in the context of EU efforts to facilitate the dialogue between Kosovo and Serbia. Semenov claims that the agreement commits Kosovo to the mini-Schengen and brings a novelty into the dynamics of the Belgrade-Pristina relationship.