Syria: The Tragedy of a Pivotal State, written by Rajendra M. Abhyankar, seeks to provide readers with comprehensive details on Syria, with a focus on how the country has come to this point and what remains insufficient regarding international solidarity.

The civil unrest that began in the Middle East with the Arab uprising is still ongoing in Syria. The conflict has taken the lives of nearly half a million people and displaced more than eleven million, about half of whom are registered as refugees or living under temporary protection regimes in neighboring countries. Syria: The Tragedy of a Pivotal State, written by Rajendra M. Abhyankar, seeks to provide readers with comprehensive details on Syria, with a focus on how the country has come to this point and what remains insufficient regarding international solidarity. Abhyankar is a former diplomat who served as the Indian Secretary of External Affairs from 2001-2004, and as the Indian Ambassador to the European Union, Belgium, Luxemburg, Azerbaijan, Turkey, Syria, and Cyprus. Abhyankar retired from the O’Neill School at Indiana University in 2019.

The first chapter of the book offers a general explanation of the conflict, delving into its roots in Syrian history, as well as the consequences of the civil war, the various military engagements in the region, the situation of displaced persons and refugees, and the country’s economic prospects.

Abhyankar describes Syria as a ‘pluralist’ and ‘pivotal’ state and notes that Syria’s location at the edge of Asia and as the ‘bridge’ to Africa gives it special geostrategic importance. He claims that Assad “had support from key elements of Syrian society while his army and intelligence remains one of the most diverse in the Arab World” (p. 48). The author also notes that the combination of cultural divisions and resource scarcity caused by ecological problems has created fertile ground for the escalation of the conflict. Interestingly, he compares the concepts of civil war and eco-Sectarianism together by stating, “[A]gainst the backdrop of climate change, the phenomena of eco-sectarianism explain the relationship between sectarian violence and environmental pressures in fragmented and unequal societies with a weak sense of national consciousness and languishing nation-building projects” (p. 42). Abhyankar characterizes Syria’s political culture as dominated by Arab Baathist thought, supporting his point with several examples (pp. 49-50). The author gave one of these examples as follows: “It has an allergy to accepting foreign aid and suspicion of the West, particularly the United States, in view of Syria’s hypersensitivity to all that is external and the constant and heavy presence of an inside/outside dichotomy” (p. 49).

Discussing Assad’s use of chemical weapons, Abhyankar laments, “[W]hile he had access to these weapons, it was inevitable that he would use them in his bid to get back territories captured by the rebel groups” (p. 69). He describes the Syrian army’s chemical warfare campaign as logistically, operationally, and strategically intertwined with its traditional warfare campaign. He also notes that the government is pursuing a military strategy of collective punishment against the population, which is opposed to the government, in the face of a shortage of manpower and resources (p. 70).

Abhyankar posits that Assad now faces the challenge of rebuilding the country, stressing that he finds Assad successful in the way he has managed the conflict. Noting Syria’s relations with the United Nations, the United States, the European Union, and neighboring countries, he states, “[T]aken together, the military and diplomatic developments of the recent past leave no room for doubt: Assad has decisively won the conflict” (p. 72).

Abhyankar considers the larger problems in Syria’s neighborhood. Maintaining a Syria-oriented analysis, he criticizes various countries or forces located in the region. The author draws attention to five countries in particular in regard to the Syrian issue: Saudi Arabia, “an unstable country in an unstable region” (p. 97); Turkey (p. 100); Qatar (p. 106); Iran as the country closest to Syria (p. 112); and Russia as a power broker making “an effort to reduce terrorism by shoring up the Assad government” (p. 117). Apart from these countries, the author also focuses on Western countries. He argues that the U.S. followed different policies during the Obama and Trump periods, that the region has always been a center of attraction for the United Kingdom, and that France became involved in the conflict through its ‘interventionist foreign policy (pp. 136-137). Abhyankar also discusses the economic, security, and military reasons that led these countries to become involved in the conflict whether inside or outside Syria.

One weakness of the book is its excessive criticism of Turkey’s role in the Syrian conflict. Abhyankar sees Assad and his supporters as forces that will bring peace to the country; he holds Turkey and other anti-Assad countries responsible for the prolonged continuation of the unrest and accuses Turkey of manipulating the refugee issue for its own advantage yet neglects to use supporting arguments in some sections. As a result, Abhyankar’s attempt to address the Syrian conflict academically is uneven at times.

Despite this demerit, the book is an important source for those seeking to study the Middle East, the Arab Spring, and the Syrian civil war. The breadth of Abhyankar’s treatment of the conflict, along with the details given, help readers look at the events contributing to the unrest from different angles. Moreover, the author offers several approaches that could aid in moving the political process forward, making the book a constructive reference for the region for years to come. 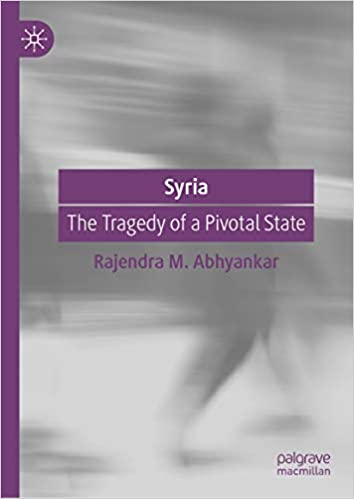