This book is highly informative for scholars and students interested in comparative politics and religion. In its explication of how religion affects politics, or the question of the role of religion in politics, it can be seen as an excellent source. In fact, one of the distinguishing features of the book is that, in all its chapters, the authors provide a brief historical background of the countries under analysis, which is extremely helpful in understanding the case studies. This book can be used as a handbook of state-religion relations in 15 countries, in particular it is useful for those who are determined to understand how market models of public religion theory explain state-religion relations.

This book is highly informative for scholars and students interested in comparative politics and religion. In its explication of how religion affects politics, or the question of the role of religion in politics, it can be seen as an excellent source. In fact, one of the distinguishing features of the book is that, in all its chapters, the authors provide a brief historical background of the countries under analysis, which is extremely helpful in understanding the case studies. This book can be used as a handbook of state-religion relations in 15 countries, in particular it is useful for those who are determined to understand how market models of public religion theory explain state-religion relations. Moreover, since the chapters are written based on sociological analyses, the model can be applied to other case studies. In fact, the primary purpose of the book is to show the validity of market models of public religions, briefly meaning that while the dominant religious traditions seek privileges in society as well as in state, minority religious groups seek autonomy from the state and advocate religious pluralism due to its less advantageous status. According to the model, in a secular nature, however, religious competitors would seek hegemony over others.

In all of the chapters, the authors discuss whether the states in question support or oppose religion, and they examine the feasibility of the separation of religion and state in the real sense. Moreover, the authors compare their cases by using different methodological approaches. For instance, they apply both quantitative and qualitative methods, and for research design, choose the most similar cases of the religion-state relation, regardless of differences in the religions themselves, or cultural, political, or geographical differences, as in their comparison of Iran and Poland (chapter ten).

Scholars who study religion in comparative politics and international relations often criticize modernization theory and argue that religion has been neglected. However, this book challenges modernization theory and suggests that religion has to be taken seriously in politics and state affairs since secularization policies have not succeeded in privatizing religion. The chapters show that governments do not ignore the religious sphere in general. Furthermore, some governments support a dominant religious tradition, while others severely oppose religions as a whole, and some tolerate religions and give them a limited space in their considerations.

The book’s approach to explaining state-religion affairs is more sociological and cultural than legal or institutional. In other words, how the role of religion is defined in a constitution is not the primary concern of the authors. What is more important are the historical experiences and dominant traditions that determine the role of religion in the given states. The modest argument of the book is that the majority or plurality of religious traditions plays a crucial role in whether a state will support or oppose religion in public sphere. It shows that even if a separation of religion and state exists constitutionally, separation in the real sense does not prevail even in the most anti-clerical state. In other words, what determines state policy for or against a religion is the degree of religious influence in the society.

Regarding the book’s theoretical conceptualization, Mehran Tamadonfar and Ted G. Jelen revise three market models of public religion. First, the ‘Quasi-Establishment’ model theorizes the condition when a dominant religious tradition seeks its privileged status in the competitive and pluralist religious market. The authors claim that the United States, India, and Brazil are examples of this model. Second, ‘L’Ancien Regimes’ model argues that what determines the relationship between the religious sphere and the state is how the government treats the hegemonic religion. While the state proposes more secular policies for the future of the country, the hegemonic religion tries to maintain its institutions and protect its religious identity against aggressive secularization policies, according to the model. Tamadonfar and Jelen assert that the cases under study in the book, France, Turkey, Spain, and Portugal, can be seen as examples of this model. Third, the ‘Religion as National Identity’ model argues that since in some countries religion is seen as a part of national identity and prioritized against external powers, the state may give superiority to a specific religion or a particular interpretation of the religion over others in support of its national autonomy. Iran, Israel, Poland, and Ireland are examples of this model.

Briefly, chapter one discusses how religion and regimes have developed a relationship in the United States over time. The chapter shows the dynamics of competition in a religious market where Protestants are dominant and struggle for privilege. In chapter two, the authors examine the regime-religion relationships in Brazil and Chile. Even if a de jure and de facto separation of state and religion exist in both countries, the Catholic Church has more advantages concerning institutional power. Moreover, the chapter provides a good comparison between the Brazilian and Chilean Catholic churches’ policies and their tools for influencing politics. chapter three examines historical and cultural religion-regime relations in Russia in different time periods. Russia is presented as an example of the quasi-establishment model, in which the state ultimately supports Orthodoxy as its national identity in the wake of several ‘de-religionization’ policies in earlier periods of Russian history.

Chapter four provides a historical overview of how the Israeli state has managed the tension between ‘democratic universalism’ and ‘Jewish particularism.’ Considering discrimination against Arabs and Muslims, the chapter argues that Israel may not be a liberal democracy, but rather an ‘ethnic democracy.’ In chapter five, Turkey and France are compared regarding how their perception of religion has changed over time, despite their secular constitutions. The chapter argues that although Catholicism has long been an established religion in France, and religious pluralism was a source of honor for the Ottoman Empire, the supportive and tolerant character of both states changed dramatically when France and Turkey indicated secularism in their modern constitutions. The chapter argues that despite religious discriminations against Muslims in France and Rum Orthodox Christians and Alawites in Turkey, both countries are much better than their past experiences regarding religious liberties in public sphere. Chapter six analyzes the dynamic and equivocal role of religion in the politics of India. It shows how the rise of Hindu nationalism has caused a decline in religious pluralism. Chapter seven shows that in Portuguese and Spanish history, ‘support, separation, and opposition’ periods were experienced under different circumstances. Currently, religion and state relations are jurisdictionally separated in both countries; authors suggest that Portugal and Spain have come to this point after various negotiations with the church.

In chapter eight, the authors examine the evolution of state–religion ties in Taiwan and Hong Kong, although they acknowledge that it is hard to conceptualize polytheistic religions along with monotheist religions (p. 250). The chapter argues even if there are similarities in both countries regarding state-religion relations, the roles of religious groups are different in both countries. Chapter nine shows how economic and social modernization has challenged the role of the Catholic Church in Ireland. Modernization has not only changed Irish society, but has transformed the church toward more religious pluralism in Ireland. However, the chapter argues that because of the church’s malfeasance, today many Irish people have turned away from the church, and anti-clericalism can often be seen in the society. Finally, chapter ten compares state-religion relations in Iran and Poland. After discussing the similarities and differences between Iran and Poland the authors argue that religion is a useful instrument to mobilize masses for radical change. However, they maintain that religion is not an effective tool for governance and political legitimacy by showing Iran and Poland as examples, in the authors words, that “in politics, religion is an excellent servant but a poor master” (p. 237).

For those who are eager to know market models of religion theory, this book is highly recommended. ‘Religion and Regimes’ is overall a useful resource for students and scholars. Providing various case studies, this volume answers when/why religious groups support or oppose states. Nevertheless, as often scholars of comparative politics do, the authors of the book aim to measure a variable –religious influence in politics– by using numerical indicators, which may not be adequate to measure such subjective variable. In other words, religious groups may compete over power in a certain state or they may support or oppose the state, but ‘religion’ is itself beyond religious groups and their competitions. 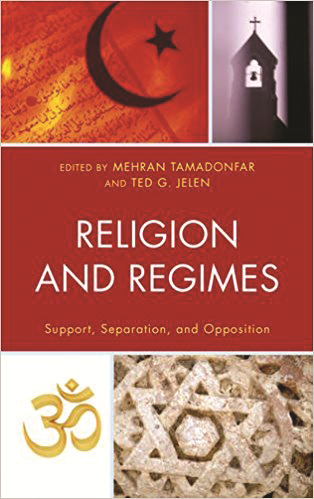