Christian Joppke’s study is an ambitious project that tries to examine the different ways in which European countries respond to the increased visibility of veiled women in the public sphere. The book paints a picture of a scene in which Muslim women become more and more assertive about their rights as citizens in a Europe that is increasingly unsure about its own identity.

Christian Joppke’s study is an ambitious project that tries to examine the different ways in which European countries respond to the increased visibility of veiled women in the public sphere. The book paints a picture of a scene in which Muslim women become more and more assertive about their rights as citizens in a Europe that is increasingly unsure about its own identity. Joppke’s book is testimony to the fact that discussions about the veil provide a framework within which one can ask fundamental questions concerning the nature, responsibilities and limits of modern European states. Joppke’s account of the recent history of “veil controversies” poses, at various points, very pertinent questions about what constitutes the divide between the public and the private, the political and the theological. In his introduction he defines Britain’s and France’s attitudes towards the veil and the “integration” of Muslim citizens as being at the two opposite ends of the liberal spectrum and brands Germany’s stance a “Christian-Occidental” one — a stance which, on the very last page, he condemns as the “worst practice” of liberalism one can observe in Europe.

The reader will find Joppke’s history and comparison of legal cases concerning various forms of veiling in Europe very rewarding indeed if he/she can digest the first chapter which is full of misreadings of theorists who have already written extensively about the headscarf and what it means to the wearer. Joppke consistently misquotes Fadwa el Guindi, Lila Abu-Lughod and Saba Mahmood, who have all done anthropological work in the Middle East, to suggest that veiled women have no agency what so ever. Criticizing the Stasi report — the book is full of serendipitous nomenclature like this — Joppke says that the report that investigated the impact of the headscarf in France interviewed only one woman who was actually wearing the headscarf. This is almost a meta-moment, leaving the reader wishing that Joppke himself had now and then resorted to the views of women who choose to wear the headscarf — a choice which he refers to a number of times as the “autonomous veil”, followed with comments to the effect that such a thing can be nothing other than false consciousness.

Once the initial hurdle of reading a catalogue of received truths concerning how the headscarf is an affront to liberal values, how Islam is an unchanging practice, and the gross generalizations that he repeats from Ayan Hirsi Ali, Bernard Lewis and Samuel Huntington is over, Joppke enters the field of experience he is more familiar with, and the book becomes instantly more readable. He starts with the veil controversy in France, defining it as a republican liberal policy — another one of these quaint moments of nomenclature — that seeks to instate secularism not as a method but as a system, an overarching value that unites French citizens. Joppke points out that France considers the success of its “citizen constituting project” dependent on making French Muslims say that they are French first, Muslim second. Equally, for women, giving up the headscarf in public places is considered an indicator of their patriotic alliances. Joppke’s research uncovers very interesting moments from the debates concerning the Foulard Fffair, such as people comparing the symbolic potency of the veil with that of the swastika. Also, various interesting statistical data emerges: the reader learns that the French government has been tagging female students with headscarves. Joppke says that as a result of the anti-headscarf rhetoric and the bans put in place “the counted cases of headscarved students” dropped from 1,256 to 12 in the space of two years, which, as Joppke points out, was considered by the French to indicate “the depth of integration” of Muslims in France. Joppke’s book is full of such gems of information that brings a whole new perspective on the efforts of liberal European countries to respond to the headscarf and on what kind of policing methods could work.

Joppke then tackles the bete noire of his narrative, Germany, a country that allows no space for the assimilation of Muslims, a country where the Turks — the majority of the Muslims — happily state that they are “auslaender”, without the claim of being of the same “nationality” of the “host society” they live in. Joppke states that the German way of defining the state in Christian-Occidental terms is a mistake for the ideal liberal space that Europe wants to advertise itself as. However, what comes out of the discussions concerning the veil cases that Germany has had to deal with is that because Germany has no immediate desire to make fully fledged “German citizens” (in Joppke’s definition “Christian-Occidental”) out of these self-proclaimed auslaender, the state has fewer expectations from Muslim women, and it does not expect them to show their allegiance by throwing away their veils á la Française. This, in turn, indeed gets reflected in the number and nature of “veil controversies” that come about in Germany and the incidents stay limited to teachers who are thought to be in a position to influence younger people.

Lastly the British case is described by the adjective “extreme”, no doubt with reference to the incidents of violence in Britain that Joppke speaks about in passing to remind the reader what “toleration liberalism” may lead to. Britain’s way of treating the different communities is described as some kind of liberation without a cause, with an emphasis on the private over the public. Indeed when pressed to define Britain’s values Gordon Brown is quoted to have included “putting civil society before the state” as a principle, rather than the correctionist and the emancipatory mission that France, at the other end of the liberal spectrum as defined by Joppke, assumes. Various British cases of the “veil problem” are recorded, in which the courts almost always favor the hijabi’s right to wear the veil, the problem raising its expected head only in the case of the niqab which, as the courts argue, makes the identification of the wearer impossible.

Joppke’s conclusion is a little more of the same as the introduction, with a call to further examine the ways in which each state may be getting it wrong or right. He suggest that time will tell which position will remain tenable in the future, and in homage to the possibly misguided French attempts to create a uniform republican subject, refers to the French ban as the “swan song” of French republicanism, that very institution which gave Europe its form of the nation state. 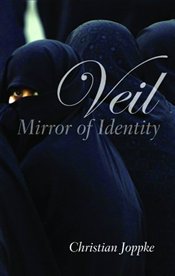