Turkey’s July 15th Coup: What Happened and Why

Evaluating an edited book written by twelve authors with significantly different points of view on one of the most critical events of recent Turkish political history in a brief book review, is a daunting task if not an impossible mission.

Evaluating an edited book written by twelve authors with significantly different points of view on one of the most critical events of recent Turkish political history in a brief book review, is a daunting task if not an impossible mission. Each chapter provides additional critical facts and a different perspective, often combined with a different temporal lens, in understanding what happened; a few of the chapters also venture into explaining why it happened, and they provide different answers or interpretations regarding the causes and the consequences of the coup and its failure. Thus, it would not be possible to critically review twelve chapters written by different authors with different arguments as if there were a single argument, methodology, or opinion that they share. Nonetheless, put together, these twelve chapters provide sufficient empirical and theoretical material to critically evaluate the goals, the structure, and the evolution of the “Gülen movement,” “Hizmet,” or the “Gülenists” as different authors variably refer to them, and the role of the Gülenists in the failed coup attempt in Turkey on July 15, 2016. There is a partial mismatch between the title of the book and its content, since three of the twelve chapters (by Balcı, Çobanoğlu, and Dohrn) do not discuss the coup attempt at all. These three chapters are about the Gülenists in general or their activities in specific locations such as post-Soviet Republics or Tanzania, and yet Gülen(ism) does not appear in the title or the subtitle of the book.

In Chapter 1, Hakan Yavuz suggests that Gülenism went through three stages: Beginning in the 1970s as a pietistic “weeping community,” it gradually evolved into a political movement in the 1990s and “a structure parallel to the government” after 2002. In Chapter 2, Mujeeb Khan summarizes the evidence demonstrating the centrality of the Gülenists, both military officers and civilians, in the failed coup. Khan also draws attention to some of the organizations such as the neoconservative think-tank Foundation for the Defense of Democracies (FDD, p. 68, 70) and pundits in the United States, who demonized the elected government while implicitly justifying the military coup in Turkey. As for the origins of the conflict between the Gülenists and the AK Party, Khan points to President Erdoğan’s harsh criticism of “the Israeli government over Gaza in 2009 and the Mavi Marmara flotilla attack in 2010” (p. 68). This is one of the few references to the potential origins of the Gülenist opposition to the AK Party governments.

Similar to Khan, Yavuz and Koç (Chapter 3), provide a list of high-profile U.S. organizations and individuals who “expressed either support for the coup and/or disdain for the Turkish public and its democratically elected government,” including Council on Foreign Relations (CFR), Foundation for Defense of Democracies (FDD), Washington Institute for Near East Policy (WINEP), American Israel Public Affairs Committee (AIPAC), and American Enterprise Institute (AEI), among others (p. 91). Yavuz and Koç suggest three causes for the failure of the coup: the refusal of the military chief of staff and key commanders to support the coup, the majority of the military’s loyalty to Erdoğan (unclear how this differs from the first), and finally, “all political parties back[ing] the civilian government” (p. 87), although on the next page we learn that “the Kurdish nationalist party (HDP),” the third largest opposition party, may not have. In contrast, Kılıç Kanat puts the Gülenist coup attempt in comparative historical perspective (Chapter 5), and emphasizes civilian mobilization as the decisive factor leading to the failure of the coup: “Ultimately, the attempt was stopped by unarmed civil resistance” (p. 133).

Michael Reynolds (Chapter 4) provides probably the book’s fullest description of the Gülenist movement and its role in the coup. His empirically rich description of Gülen’s worldview and strategy in general and the Gülenists’ takeover of the military through sham trials such as Sledgehammer in particular, its systematic rigging of civil service examinations by stealing and feeding the answer keys to the Gülenists, the use of a specific smartphone encryption app “ByLock” by the Gülenists preparing for the coup, put together provide a rather thorough summary of Gülenist ascendance over the years. Yet even Reynolds’ chapter is mostly descriptive regarding the most critical puzzle since he does not provide any causal argument as to when and why the Gülenists turned against the AK Party government or Erdoğan’s leadership. Moreover, although he amply documents Gülen’s powerful sponsors in the United States (p. 114 ff), Reynolds does not discuss any noteworthy American contacts Gülen had in the decades before he moved to the United States in 1999. “According to one American,” Reynolds relates, “Turkish generals repeatedly and indignantly complained to him that Gülen was ‘America’s Frankenstein,’” (p. 112) and yet Reynolds does not inquire as to what the indignant Turkish generals meant with this curious adage that they often repeated.

The other chapters do not focus as much on the coup, but are valuable nonetheless. Caroline Tee (Chapter 6) concurs with Khan in stating that the Gülenists and the AK Party had “markedly different” stances on Israel, and by extension, on Iran (p. 160). These differences became public after nine Turkish activists on a humanitarian flotilla attempting to break the Gaza blockade were killed at sea by Israeli soldiers” (p. 160). While Erdoğan lambasted Israel, and Turkey expelled the Israeli ambassador, Gülen spoke out publicly “suggesting that the confrontational approach of the activists had been misplaced” (p. 161). Sabine Dreher (Chapter 7) concludes that the Gülenists are “a religious revival movement that promotes neoliberalism through its own globalization project with three elements” including private schools, business, and intercultural dialogue (p.174), and as such, it resembles the “globalization elite centered on the United States and Great Britain –the Anglosphere– that defended the free market and private property” and pushed the “neoliberal project” for the last several decades (p. 176).

Bayram Balcı (Chapter 8) discusses the Gülenists’ resilience in most Central Asian republics. Kristina Dohrn (Chapter 11) provides a brief overview of Gülenist schools in Africa while focusing primarily on her fieldwork in Tanzania. Yavuz Çobanoğlu details the extreme form of patriarchal hierarchy within Gülenist circles through his interviews with twenty-seven women who lived in Gülenist “houses of light” in Tunceli.

David Tittensor (Chapter 9) focuses on the very secretive and hierarchical nature of the movement, which he starkly contrasts with Western scholarly narratives about the Gülen movement as “having no religious processes or hierarchies” or having “abandoned this hierarchical structure [allegedly found in other Islamic movements]” (p. 224). Tittensor suggests that the Western scholars who wrote such laudatory depictions of the Gülen movement had many connections with the Gülenists, which casts doubt on their academic credibility (p. 224). Joshua Hendrick (Chapter 12) expands on this theme by identifying a global network of Gülenist-sponsored academic institutions, including endowed professorships at Australian Catholic University and Deakin University, both in Melbourne, as well as at the Catholic University of Leuven in Belgium, at Syarif Hidayetullah Islam University in Jakarta, Indonesia, and at the University of Houston in Texas, which “hosts more Gülen-inspired institutions than any other U.S. state” (p. 296-297). Hendrick provides examples of how Western scholars were paid generous honorariums to contribute to conferences and books where there would be no criticism of Gülenism, thus creating a scholarly literature about Gülenism that is overwhelmingly laudatory.

This otherwise valuable book has three major lacuna of causal importance. While the book delivers an empirically rich answer to the first and descriptive question in its subtitle (“what happened”), most of the authors do not attempt to answer the second and causal question (“why”). Even the few notable exceptions mentioned above (e.g., Khan and Tee) hint at a causal argument only in passing without articulating it or testing it against other explanations. Second, the geopolitical context and in particular the U.S. role in cultivating Gülenists over many decades prior to Gülen’s relocation to the United States in 1999 is not at all discussed, and his contacts with the CIA are either downplayed or even dismissed as a “conspiracy theory.” For example, many Turkish authors point to Enver Altaylı, an Uzbek-Turkish nationalist and former intelligence officer, who was a very close friend and biographer of the late Ruzi Nazar (1917-2015), an Uzbek-American CIA officer who was stationed at the U.S. Embassy in Ankara for a long time during the Cold War (1959-1971), as the critical person establishing the link between the CIA and the Gülenist network since the 1970s.1 In contrast, neither Altaylı nor Nazar are even mentioned by any of the authors.

Third, the historical and causal significance of the popular civilian resistance to the coup attempt for the future of civil-military relations in Turkey is not discussed much, except in part by Kanat. Turkey is a country that experienced numerous successful and failed military coups throughout the 20th century, but none that witnessed such a popular civilian mobilization against putschists. This is an area where the failed coup in Turkey could have been utilized to make a critical theoretical contribution to the study of civil-military relations. Perhaps relatedly, and also with the exception of Kanat’s chapter, there are very few references to the otherwise numerous publications of Turkey-based scholars on the causes and consequences of the failed coup, which include a special issue of the current journal,2 and many books and reports published by SETA,3 not to mention the more voluminous publications in Turkish. Perhaps relatedly, only one of the twelve authors of the book, the coauthor of Chapter 3, is based in Turkey.

Despite these shortcomings, I highly recommend this book as one of the few academic books in English examining the failed coup attempt in Turkey from multiple angles by twelve authors holding different opinions. 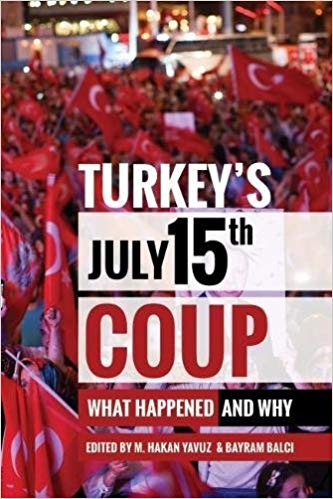