The quest to incorporate non-material factors into international relations has continued apace into the twenty-first century. After religion, culture and identity, now ‘civilization’ seems to be attracting a great deal of attention from international relations (IR) scholars. Civilizations in World Politics: Plural and Pluralist Perspectives, which is the result of a roundtable and a panel organized at the 2007 and 2008 annual meetings of the American Political Science Association, investigates the potentiality of the concept of civilizations in order to better explain world politics. The book consists of six case studies of civilizations (American European, Chinese, Japanese, Indian, and Islamic) in six chapters, bookended by an introduction and a conclusion by Peter J. Katzenstein and Patrick T. Jackson respectively.

All six case studies revolve around particular questions about how to conceptualize civilizations in contemporary world politics: should civilizations be conceived as having a persistent essence (dispositional approach) or as existing only in politicians’ rhetoric and discourse in such a way as to warrant examination of political discourses? Do plural civilizations exist within one “civilization of modernity” while keeping their own unique and distinctive practices?

In his introduction to the book, while acknowledging at the outset the plurality and pluralistic nature of civilizations, Katzenstein notes that civilizations “coexist with each other within one civilization of modernity” (p.1), which means “…a multiplicity of different cultural programs and institutions of modernity that derive from the interaction between West European modernity and the various civilizations of the Axial Age” (p.17), or what we often call today a global world” (p.1). Katzenstein’s claim provides a launch point for the rich discussions that follow. Indeed, Emanuel Adler raises an explicit objection to Katzenstein’s argument in chapter three. According to Adler, European civilization, now in its second phase with the EU being the normative power, is rather a post-modern “community of practice.” Adler notes the EU’s embrace of the approach of ‘power to’ instead of ‘power over,’ exemplified by practices such as the elimination of borders, the enlargement process, CFSP [Common Foreign and Security Policy] practices, and the like.

Bruce Lawrence, in his study of Islamic civilization, concurs with the rest of the authors that civilizations exist more in peoples’ minds, attitudes and discourses than in specific territories today. His conclusion that we should focus more on what people think about their civilization is a good reminder that nation-states still dominate thinking about international relations.

In their chapters on Japanese and Indian civilizations respectively, David Leheny and Susan Rudolph substantiate the discursive approach. Leheny asserts that despite the fact that the notion of the essence and distinctiveness of Japanese civilization has been persistent and common among the Japanese, civilizations or civilizational states cannot be employed in an experimental framework in world politics. Rudolph demonstrates the role politicians deliberately play in creating conceptions of civilizations as she analyzes the existence of four variants of Indian civilization within 250 years (mid-18th until 21st century): orientalist, anglicist, Indian, and Hindu nationalist. Adler is the author of the only chapter to try to advance a dispositional approach as he takes the European civilization as a community of practice with dispositional properties.

James Kurth states in his chapter that humanity lives in a secular modern global civilization today, but one cannot help but ask how global that civilization is, especially when he acknowledges that Chinese, Indian and Persian civilizations still have their own civilizational states (p. 65) and that “this conception of global civilization has made America the principal adversary or target of particular repositories and remnants of the old Axial age civilizations such as China, India and Iran and Shiite Islam and Sunni Islam and its transnational networks” (p. 41). Besides, described as “those civilizations that crystallized during the half-millennium from 500 B.C. to the first century of the Christian era”[5] by Eisenstadt and as confirmed by Lawrence in this book (p.158), contra Kurth, Islam would be a ‘post-Axial age civilization’ not an ‘Axial one.’

Last but not least, those who are familiar with the depiction of Turkey as a ‘bridge’ between the East and the West by foreign observers as well as Turkish politicians could be easily disturbed by Lawrence’s constant description of Islamic civilization as a bridge (p. 164-165, 166, 172). It is not clear if Lawrence is using the ‘bridge’ metaphor in the Huntingtonian sense, in which it would mean “… an artificial creation connecting two solid entities but part of neither,”[6] or, as seems more likely, something that connects two entities and carries one side to another, but is not perceived as an actor with an independent existence.[7] Perhaps, it would have been a better idea for Lawrence to adopt the ‘emic’ perspective Jackson raised in his chapter, and try to “explicate how participants in that culture make sense of their own activities” (p.185). If that had been done, it is highly likely that Lawrence would have found that the participants of the Islamic civilization did not perceive their civilization a ‘bridge civilization.’

Overall, these reservations notwithstanding, Civilizations in World Politics: Plural and Pluralist Perspectives not only stands as a valuable and insightful introduction to the study of civilizations and civilizational identities in 21st century world politics, but as an important terminological contribution that might help save a revered concept from such arbitrary usages as “market civilization.”[8] 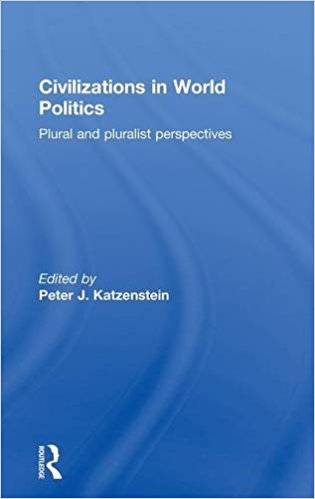