Dynamics of Energy Governance in Europe and Russia

Relations between Europe and Russia in the post-Cold War era constitute a fascinating area of study, as it involves many interlinked socioeconomic and political issues. Significantly, the events that shaped the political landscape of contemporary Europe, i.e., the reunification of Germany and collapse of the Soviet domination of East Europe, were precursors to the disintegration of the Soviet Union. The book under discussion focuses on the issue of energy governance in Europe and Russia, which is significant as both Russia and Europe share a flourishing codependent energy trade relation and the issue touches on many areas of common bilateral concern- political, economic, technological, environmental, bureaucratic and legal.

Relations between Europe and Russia in the post-Cold War era constitute a fascinating area of study, as it involves many interlinked socioeconomic and political issues. Significantly, the events that shaped the political landscape of contemporary Europe, i.e., the reunification of Germany and collapse of the Soviet domination of East Europe, were precursors to the disintegration of the Soviet Union. The book under discussion focuses on the issue of energy governance in Europe and Russia, which is significant as both Russia and Europe share a flourishing codependent energy trade relation and the issue touches on many areas of common bilateral concern- political, economic, technological, environmental, bureaucratic and legal.

The book has twelve chapters, divided in three thematic sections, apart from Introduction, Conclusion and Afterword. It represents a culmination of debates exchanged through the Political Economy of Energy in Europe and Russia (PEEER) network and approaches the entire issue through the theoretical approach of International Political Economy. Essentially, the book aims to focus on multiple actors and institutions that shape the policy processes of energy governance in Europe and Russia, in the context of an interlinked and interdependent global, regional and local scenario.

In the first section on “Transnational Dynamics” the focus is on legal issues. Tatiana Romanova discusses EU-Russian energy relations in the context of legal approximation (Article 55 of the EU-Russian Partnership and Cooperation Agreement), noting two particular focal points – the improvement of the energy trade scenario and the clean energy agenda. Daniel Behn and Vitally Pogoretskyy analyze the system of dual gas pricing in Russia and its impact on EU imports. They raise an important debate between the Statist and Liberal approaches by questioning the consistency of this system with WTO regulations. For Anatole Boute, the export of European foreign energy efficiency rules to non-EU countries, especially Russia, has the potential to become the cornerstone of the EU’s new energy diplomacy, to meet the challenges of a secure energy supply from Russia, and to mitigate bilateral climate concerns. M. F. Keating, on the other hand, deals with the connection between and possible harmonization of global best practices (to systemically use competition, regulation and privatization to reform the energy sector) and the EU’s energy security agenda.

In the second section, “Beyond Domestic Contexts,” Andrei Belyi and Ksenia Petrichenko continue the discussion on best practices and make a comparative analysis of the issue in the prevailing politico-economic situations in Germany, the UK and Russia. The other three chapters basically deal with the significant strategic dimension of Russian energy policy. Slowmir Raszewiski analyzes the “New Cold Warrior” perceptions of Poland and Lithuania to their energy relations with Russia – perceptions that are more colored by their past experiences – and their attempts to break free of their continuing energy dependence on Moscow. Ekaterina Demakova and J. M. Godzimirski discuss the external energy strategy of Russia through a SWOT analysis, while exploring the roles of Gazprom and Germany as important internal and external actors. Simon Pirani scrutinizes the gas wars of 2006 and 2009 between Russia and Ukraine, which points out many interrelated issues, including the importance of a stable supply chain of producer-transit -market states for ensuring energy security, the comparative bargaining powers of a producer and a transit state, and the crucial question of short-term politics gaining prominence over long-term energy strategy.

The third section focuses on “Contemporary Transformations,” with new challenges affecting the energy governance scenario. Caroline Kuzemko discusses the new policies and institutions of the UK government to deal with the challenges of the ‘energy-climate nexus’ and meet the targets of the ‘Low Carbon Transmission Plan’ and ‘Renewable Energy Strategy.’ Andreas Goldthau takes up a very important issue with far-reaching consequences: the impact of Shale gas in the Eurasian gas market in the spheres of pricing, supply and stability. Kim Talus analyses the relevance of the contemporary system of long-term gas contracts between EU importers and exporting companies in the face of new regulations in the EU energy market, i.e., third party access, ownership unbundling and strong regulatory schemes. David Elmes takes a study of three scenarios for the future of the energy industry, as prepared by Shell, UK Foresight and Forum for Future, and applies them to 44 international energy companies for an assessment of the evolution of the strategic decision-making process in the energy industry as a whole and its implication for energy governance.

Bilateral energy relations is an intrinsic part of a multi-dimensional strategic relationship between Europe and Russia, with new issues and factors continuing to shape it. As this study analyzes the role of actors in an interconnected global scenario, the debate ignited the urge to know more about related factors, such as the importance of Germany for Russian energy strategy to bypass the former East European allies, the role of Turkey as a transit state between Central Asia and Europe to avoid Russia, and the growing significance of the Arctic as an energy-producing region with the related concerns of whether it could become a new theater of strategic rivalry between Europe and Russia.

The book raises many pertinent questions that have contemporary relevance, as it also points out future concerns to securing a sustainable energy governance mechanism in Europe and Russia. It has a declared theoretical propensity, but it attempts something beyond that. The uniqueness of the book lies in the fact that, through a nuanced prism of comparative analyses of energy governance, it opens up a whole new discourse on bilateral relations between Europe and Russia and suggests possibilities for cooperation amidst the existing political, economic, legal and environmental concerns. 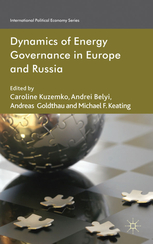 The Silk Road between a Rock and a Hard Place: Russian and Chinese Competition for Central Asia’s Energy