The book vividly presents the international political aspect of the topic and does not abstain from touching on social and internal affairs when necessary. However, the latter are not sufficiently analyzed. Nonetheless, Trump’s Jerusalem Move involves significant analysis, gives broad background, and adopts an aggregated approach toward the Israeli-Palestinian conflict in the context of Trump’s Jerusalem move. I believe that this book will serve as an essential contribution to the literature and help us understand the controversial atmosphere of al-Aqsa. I strongly recommend this well-r researched volume to researchers, students, and anyone who desires to understand the Israeli-Palestinian conflict in a comprehensive way from the perspective of Trump’s declaration.

Jerusalem has witnessed many conflicts throughout history, since it is a holy city in the eyes of the followers of the three Abrahamic Religions–Islam, Christianity, and Judaism. The intervention of Israel in the region since 1948 has brought it to the agenda of international politics once again. Trump’s Jerusalem Move: Making Sense of U.S. Policy on the Israeli Palestinian Conflict, an edited book by Kadir Üstün and Kılıç B. Kanat, attempts to shed light on Trump’s decision to move the U.S. embassy to Israel from Tel Aviv to Jerusalem, thereby recognizing Jerusalem as the capital of the state of Israel, reversing traditional U.S. policy and creating an uproar in the Arab and Muslim worlds. Despite U.S. long-standing policy toward the Israeli-Palestinian conflict in which the U.S. was supposedly a mediator, Trump’s decision debunked this falsehood and exposed the real face of the U.S., “which is not only Israel’s lawyer but also its realtor” (p. 17). While examining the general U.S. policy toward the topic and how it culminated in Trump’s move, the book outlines South America, Latin America, and Europe’s approaches to the decision, and analyzes Turkey’s global activism on the issue.

The book is made up of seven chapters. The first chapter begins by outlining U.S. policy toward Jerusalem prior to the Trump Administration. After presenting the general framework, Lara Friedman describes how Trump and his circle promised to move the embassy to Jerusalem–just like all the other presidents did before getting elected. However, Trump meant it and kept his promise, unlike the others, even though the experts insisted on not taking him seriously. The author also demonstrates that this move is a part of a wider framework focused on rolling back the peace process.

In the second chapter, Yousef Munayyer sets forth how U.S. policy on the topic was ostensibly shaped around mediating between the sides –although it consistently supported Israel– until the Trump Administration took office and revealed the real U.S. policy. The author argues that with Trump’s declaration, the Oslo era has come to a close (p. 60). Regarding the effects of the decision on both sides, the U.S. is trying to force the Palestinian side to negotiate by threatening to cut aid to Palestinian refugees and hospitals while Israel exploits this support to the utmost. Whereas Trump changed the U.S. policy on the issue, the Palestinians are expected to mobilize and return to the old era of the intifada (p. 72).

In the third chapter, Cecilia Baeza examines the Latin American countries’ response to Trump’s declaration. After Trump’s decision, two Latin American countries, namely Guatemala and Honduras, were among the only ones in the world that followed his footsteps in moving the embassy. Israel is important to these countries for diplomatic, economic, and demographic reasons. In particular, countries with right-wing leaders who are supported by Evangelical churches are prone to accepting Trump’s guidance, and countries whose leaders are facing domestic political problems tend to seek help from the U.S. through Israel.

The fourth chapter examines the outcomes of Trump’s decision in South America by focusing on Paraguay and Brazil. These countries appeared indecisive on the issue, oscillating between supporting the declaration and standing against it. Because of its “weak institutionalized diplomacy,” the Paraguayan president initially made a promise to follow the U.S. in moving the embassy. Yet the subsequent president chose to roll back this promise to foster relations with the Arab and Muslim world. For its part, Brazil has long supported the two-state solution. However, its economic ties with Israel, Evangelical Christians, and anti-globalists in the country have compelled the president to make promises to move the Brazilian embassy to Jerusalem. Eventually, this pro-Israel turn was neutralized by other forces within the president’s administration, however, and the decade-old position of Brazil prevailed. Guilherme Casarões argues here that it would be more suitable for the U.S. to maintain diplomatic pressure on such free trade partners as Colombia, Peru, and Chile because the U.S. doesn’t appear to be exerting influence on Brazil and Paraguay to a great extent (p. 144).

In the fifth chapter, the dispute is covered from the European Union’s perspective. As the EU’s longstanding policy on the Israel-Palestine conflict is to side with international law, it has traditionally supported the two-state solution. However, Jacob Eriksson argues that there is a growing division within the EU, as some countries like the Visegrád Group (the Czech Republic, Hungary, Poland, and Slovakia) have altered their stance (p. 154). The growing ‘right-wing, nationalist, populist, Eurosceptic’ movement in Europe has much in common with Israel concerning liberalism, Islam, nationalism, and terrorism. The chapter also addresses how the EU’s normative power has been affected by the local politics of member states (p. 156). The author argues that the general approach of the EU toward the dispute will not change in a way that would violate international law and that the motives behind the Visegrád group’s relations with Israel do not appear prone to change in the near future, even though its position is not totally stationary (p. 167).

The sixth chapter outlines Turkey’s position toward Israel in regard to the Jerusalem issue. Jerusalem is so important for Turkey that it is the main indicator of its relationship with Israel (p. 178). No Turkish government, regardless of its left- or right-wing proclivities can stay neutral to the topic thanks to Turkish public outrage. Turkey’s long-standing policy toward the issue has been to favor the two-state solution while being vocal about the injustice done by Israel in the area. After Trump’s decision, Turkey declared that it would open an embassy to Palestine in East Jerusalem, apparently renouncing its decades-old policy that the status of Jerusalem should be decided according to final status negotiations. Although Turkey is trying to fix its relations with the U.S., it has not abstained from lobbying the international community against Trump regarding this issue. Kadir Üstün and Kılıç B. Kanat argue that any further damaging acts have been prevented and that the U.S. is isolated in the diplomatically active on al-Quds and the Israeli occupation (pp. 189-190).

In the seventh chapter, Mark Perry describes his encounter with the first president of the Palestine National Authority (PNA) Yasser Arafat, and examines his talks with the U.S. The appearance of the divisions in Fatah is discussed in this chapter as well. While evaluating the incidents involving Abbas and Arafat, the author concludes that “the use of force must be a part of the Palestinian calculus, that the one thing that Israel understands is pain” (p. 205).

The book vividly presents the international political aspect of the topic and does not abstain from touching on social and internal affairs when necessary. However, the latter is not sufficiently analyzed. Nonetheless, Trump’s Jerusalem Move involves significant analysis, gives broad background, and adopts an aggregated approach toward the Israeli-Palestinian conflict in the context of Trump’s Jerusalem move. I believe that this book will serve as an essential contribution to the literature and help us understand the controversial atmosphere of al-Aqsa. I strongly recommend this well-researched volume to researchers, students, and anyone who desires to understand the Israeli-Palestinian conflict in a comprehensive way from the perspective of Trump’s declaration. 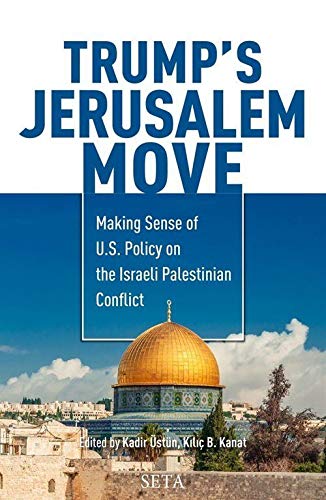 Author
Edited by Kadir Üstün and Kılıç B. Kanat