The book’s originality owes much to Yükselen’s examination of the changing character of the Syrian War and its impacts on the behaviors of both state and non-state actors. Since the very beginning of the Syrian War, Turkey and Russia have had diverging and conflicting strategic ends regarding the issues, such as the future of the Assad regime, opposition groups (pp. 41-52), and the fate of the PYD/YPG (p. 182).

In recent years, much excellent research has been conducted concerning the Syrian War, which broke out in 2011. Turkey and Russia in Syria: Testing the Extremes is one of these studies. The author’s well-researched and well-designed work offers valuable insights into the relationship between Turkey and Russia after the Syrian War within the context of an oscillation between the extremes of war and alliances.

Hasan Yükselen adopts an approach that goes beyond the history of relations between nation-states. Turkey and Russia in Syria consists of five chapters. The first chapter examines the origins, escalation, and mutation of the Syrian War, which started with civilian protestors and turned ‘‘into an internal war and later into a proxy war’’ (p. 15). The second chapter, titled “Acts,” attaches importance to the territorialization dynamics in Syria, which eventually led the U.S. and Russia to change their policies in line with the transformation of the Syrian War. The following chapter is mainly devoted to an analysis of the factors that pushed Turkey to respond to the territorialization of the PYD/YPG. In the fourth chapter, Yükselen focuses on the oscillation between Turkey and Russia, ranging between war and alliance. The final chapter turns to the prospects of Turkey’s relationship with the U.S. and Russia in the context of the Syrian War’s changing dynamics.

The book’s originality owes much to Yükselen’s examination of the changing character of the Syrian War and its impacts on the behaviors of both state and non-state actors. Since the very beginning of the Syrian War, Turkey and Russia have had diverging and conflicting strategic ends regarding the issues, such as the future of the Assad regime, opposition groups (pp. 41-52), and the fate of the PYD/YPG (p. 182). However, Turkey’s downing of a Russian fighter aircraft gave rise to a probable war, epitomizing one extreme, the Astana process and the Idlib Accords, together with Turkey’s acquisition of Russia’s S-400 air defense systems, epitomize the other extreme: a Russo-Turkish alliance. What pushed the two countries from rivalry to the edge of war is mainly the territorialization of terrorist groups such as the PYD/YPG and ISIS, both of which have posed a grave risk to the states gains and interests. Therefore, interestingly enough, once the territorialization of the threat materialized, the terrorist organizations/non-state actors began to shape ‘‘the behaviors of state actors—even the ones that were not willing to become involved’’ (p. 57). Yükselen successfully reveals that the territorialization of security concerns forced Turkey to drift apart from its long-standing ally, the U.S., which preferred to employ the PYD/YPG as its proxy in Syria and to address its security concern through military operations such as Operation Euphrates Shield, Operation Olive Branch, and Operation Peace Spring.

The territorialization of threats also caused the deterritorialization of the Syrian regime. When the deterritorialization of the Syrian regime became clear, Moscow chose to change its strategic calculus and to use its military instruments on the ground. This move also demonstrates Yükselen’s claim that the changing and enduring nature of the Syrian War has influenced states’ behaviors (p. 132). Another original aspect of the book stems from Yükselen’s depiction of the cooperation between the PYD/PYG-dominated Syrian Democratic Forces and ISIS, such as the Tabqa agreement giving the city of Tabqa to the Syrian Democratic Forces established to ease Turkey’s security concerns, and a deal aiming at transferring ISIS militants to Deir al-Zor from Raqqah under the brokerage between the PYD/YPG and ISIS. These cooperation attempts reveal ‘‘how non-state actors have no restrictions in using illegitimate methods to legitimize their causes and to revert the mechanism of proxy war upside-down’’ (p. 103).

Turkey and Russia in Syria, which revolves neatly around the Syrian War and its impacts, could have been strengthened by the inclusion of other aspects, as follows. First, Yükselen touches upon the relationship between Turkey, the U.S., and Russia within the context of the Syrian War, and non-state actors. He does not provide any detailed analysis of the effects of other state actors on their relationship, such as Iran, even though the importance of its impact is acknowledged by the author himself on several occasions. For example, he notes “the Islamic Revolutionary Guard Corps (IRGC) involvement and support as a part of broader Iranian strategy not only promoted Iran as one of the major actors in Syria but also offered an invaluable foothold for future strategic encounters that could potentially constrain Israel in the Middle East” (p. 30). Given the significance of Iran’s foreign policy toward Syria and other countries, and Iran’s aspiration for the Shia Crescent, it is unfortunate that the author does not include these factors in the discussion.

The second shortcoming of the book is that the author argues that the Russian side, after the jet downing incident, preferred to get closer with the PYD/PYG to “constrain Turkey’s political and military options” (p. 139). Paradoxically, whilst Russia has “strived to constrain the process of the regime’s deterritorialization” (p. 161), and agreed on the territorial integrity of Syria with Turkey, the author does not provide a convincing justification regarding why Russia opted to cooperate with a terrorist organization at the expense of souring its relationship with Syria. The third problem concerns the territorialization of the PYD/YPG and ISIS. Yükselen offers a comprehensive account of the effects of the territorialization of the PYD/YPG and ISIS on both state actors and non-state actors, overlooking the territorialization of the Free Syrian Army, and its possible consequences. Lastly, to a large extent, Yükselen focuses on the impact of external factors on the formation of opposition groups; for example, the inaction of the U.S. and the Russian support to the PYD/YPG, all of which were efficient in the group’s efforts at territorialization and advance in Syria. However, except for the Syrian regime’s withdrawal from the Northern part of the country, internal factors, such as the role of Islam, are pigeonholed by and large.

To conclude, this book not only achieves its aim of providing insights into the impacts arising from the changing nature of the Syrian War, which caused Turkey and Russia to oscillate between the extremes of war and alliance, it also highlights how non-state actors can play a determinative role in the behaviors of state actors in general, by offering a critical and enlightening perspective. Thus, Yükselen’s study is a seminal resource for readers interested in the relationship between Turkey and Russia, the U.S.’ policy toward the Syrian War, proxy warfare, and the role of non-state actors in shaping states’ behaviors. 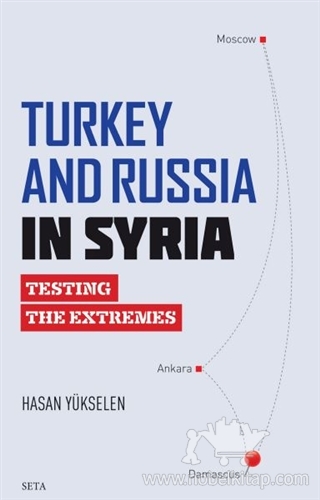 The Future of Turkey’s Airpower: The Fifth Generation Challenge