Turkey was not affected by the financial crisis as much as the advanced economies and managed to rapidly exit the turmoil. The reasons behind the strong response and quick recovery of the Turkish economy were its low country risk and low currency risk premiums. This study shows the foundations of these low risk premiums and compares some measures of these risks of the Turkish economy with peer countries. Second, this paper demonstrates that all of Turkey’s economic sectors were very strong before the crisis and sustained this strength during the course of the crisis. Finally, it discusses the policies that have already been taken and planned to be taken by Turkey’s economic authorities. The government seems to be very determined in keeping fiscal discipline as tight as necessary while not being excessive.

Turkey is among the few countries that were not affected from the recent financial crisis as much as the advanced economies. Moreover, it has become one of the countries that got out of the economic downturn first. The reasons behind this strong response and quick recovery can be placed under two categories: low country risk premium and low currency risk. The indebtedness of both private and public sectors were low compared to its peer countries and the foreign exchange positions of these sectors were very strong. Several different measures of the economy can be considered while comparing the Turkish economy with its peers and show the Turkish economy’s pre-crisis situation and its resilience to the financial downturn. These measures are leverage on households and the corporate sector, the public sector’s debt level, and foreign exchange positions of individuals, the public and the corporate sectors. However, in each measure the number of countries is limited by reliability and availability of the data. 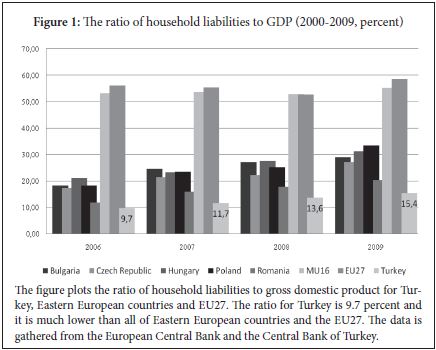 Unlike its peers, the leverage ratios in Turkey for both private and public sectors, stayed at moderate levels during the period of excess global liquidity. For the private sector, households’ indebtedness was kept below certain limits. Figure 1 compares the ratio of household liabilities to gross domestic product (GDP) in Turkey and in the European Union and some of the Eastern European countries. Before the crisis, this ratio was very low in Turkey relative to the other countries. During the crisis, although this ratio had a tendency to increase among the Eastern European countries, it did not change in Turkey. Table 1 collects a larger set of countries and compares the ratios of consumer loans to GDP. Although the calculation techniques vary across countries, these numbers reflect the basic trends. The consumer loan to GDP ratio was the lowest in Turkey each year (except India and Indonesia for only a couple of years). 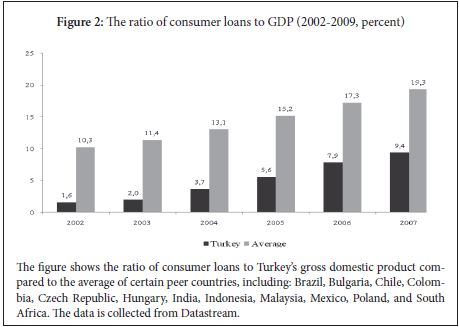 The figure 2 illustrates Turkey’s ratio of consumer loan to GDP and averages it out on a yearly basis in comparison to other countries during the pre-crisis period from 2000 to 2009. It is clear that Turkish consumers during the crisis only had a very low level of loans compared to the other countries.

Although it is very difficult to find reliable data for corporate loans, the best approximations of the ratios of loans to corporate sector to GDP are collected and illustrated in figure 3. The figure shows that the liabilities of the corporate sector in Turkey remained relatively low. One of the reasons behind the low levels of indebtedness of households and corporate sector was that banks were subject to additional capital adequacy requirements and hence not allowed to increase their leverage to toxic levels. 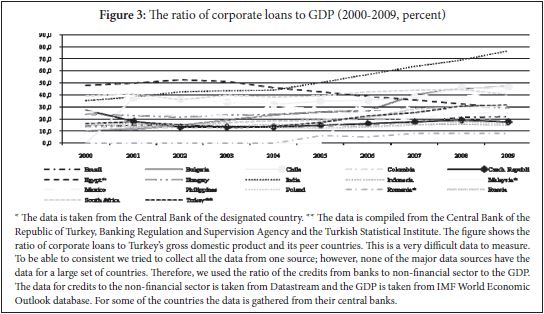 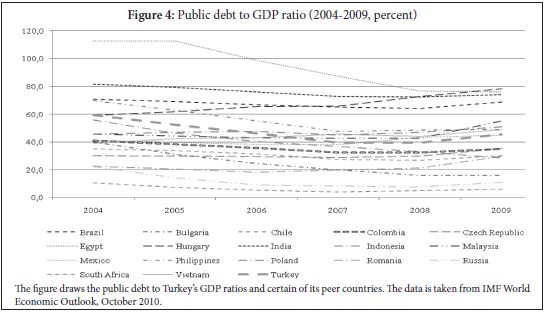 After 2006, a tendency of increasing household indebtedness and corporate sector debt was observed in almost all countries. However, in Turkey since the monetary policy was not accommodative, neither excessive lending nor asset bubbles were observed.

In Turkey, the public sector’s debt level has been significantly reduced since 2002. This was a result of the Turkish government’s ambitious fiscal discipline. This discipline produced a primary surplus of five percent of GDP on average over the five year period prior to 2008. As shown in figure 4, Turkey’s public debt was already low prior to the crisis and its fiscal discipline was maintained during the turmoil. It is still below the Maastricht criteria, which states that the public debt to GDP ratio cannot exceed sixty percent. 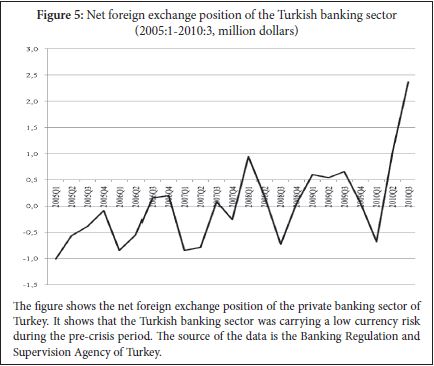 As shown in figure 5, before the crisis, the Turkish banking sector’s net foreign exchange position is barely negative. Therefore, the Turkish banks were not fragile against a possible currency crisis. Moreover, since foreign currency denominated loans to individuals were prohibited and foreign currency deposits were not, households carried a significantly long position as a fallback (See figure 6). It was the corporate sector that carried a significant foreign exchange position, about 10 percent of GDP (See figure 7). However, since the duration of their assets was short, whereas the duration of liabilities was long, the short term position of the Turkish firms was almost balanced. The short term foreign exchange position of the corporate sector is depicted in figure 8. 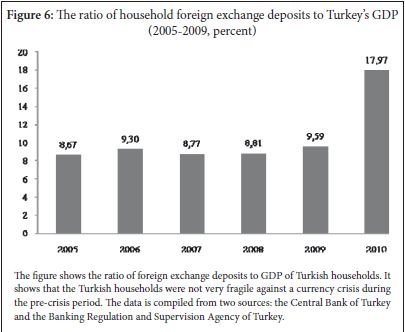 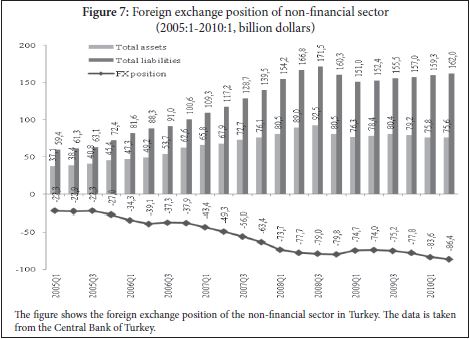 All of these measures of the domestic economy are summarized by the two indicators to evaluate the country’s overall performance and risk. These indicators are the credit default swap index (CDS) and the emerging markets bond index (EMBI). Figure 91 plots the daily CDS of the countries. According to that figure, Turkey’s risk premium sustained a stable course, which is a result of its solid financial system and low levels of indebtedness, although the country has lower credit ratings. As the concerns regarding fiscal sustainability in the Euro Area continues, CDS premium of Hungary, Bulgaria and Romania stay higher than other Central and Eastern European countries. The EMBI-Global is presented in figure 102 and it shows that Turkey’s risk premium remains lower compared to the other emerging economies. Risk indicators of Turkey follow a parallel path with the Latin American countries, except Argentina. 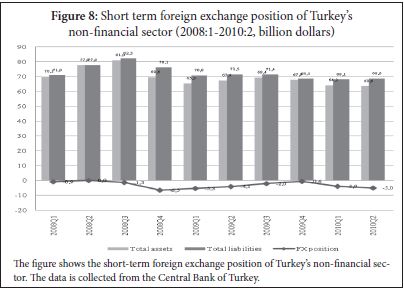 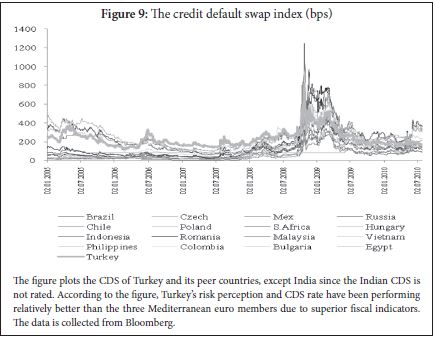 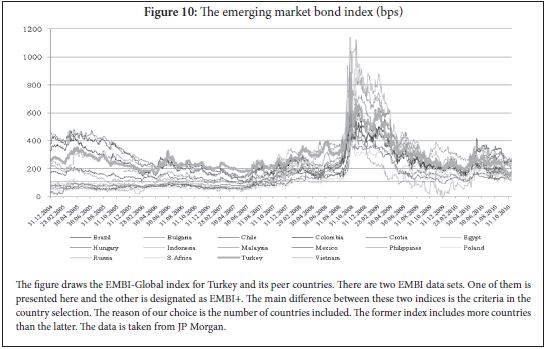 Low leverage and low currency exposure became a major source of strength that contributed to the resilience of the Turkish economy to the global crisis. Here, we should mention a few policy decisions, which were made and will be applied by the Central Bank of Turkey and the Turkish government. The financial environment is still challenging and this situation is likely to persist in the foreseeable future. Therefore, the Central Bank continues to focus on financial stability and shapes its policies based on three principles. The first one is to discourage excessive leverage and to keep the banks and corporate sector’s debt ratios at modest levels. To that end it raised the required reserve ratios in Turkish lira liabilities and stopped remuneration of required reserves. It also enacted a technical adjustment in the policy rates to encourage better liquidity management within the banking system and to reduce the dependence of banks on the Central Bank’s lending facilities.

The second issue is strengthening the foreign exchange position of both the public and private sector. The Central Bank made a significant change in the method of foreign exchange buying auctions in late 2010 and accelerated the pace of reserve accumulation.

It now applies a higher required reserve ratio for foreign exchange liabilities and has increased that ratio recently. The Regulatory and Supervisory Agency and the Central Bank also apply various rules and mechanisms to keep foreign exchange position of the banks in check and prohibit the use of foreign exchange-denominated or -indexed loans by households.

Finally, the government seems to be very determined in keeping fiscal discipline as tight as necessary while not being excessive. It announces a Medium Term Program regularly every year that covers the projected economic and fiscal outlook for the next three years. According to the most recent program, Turkey’s budget deficit will fall below the Maastricht criteria (3 percent) next year and public debt ratio will decline more than 6 percentage points to 37 percent in 2013, lower than the pre-crisis level.

Zübeyir Kılınç
Central Bank of the Republic of Turkey

İbrahim Turhan
Central Bank of the Republic of Turkey,

The Turkish Economy During the Justice and Development Party Decade

Turkey’s Stance towards the Main Developments in the South Caucasus

Neo-liberal Globalization and Institutional Reform: The Political Economy of Development Planning in Turkey