A valuable book that helps to better understand the spiky path in the relations between Western countries on both sides of the Atlantic. Simoni scans through the transatlantic relations (TRs) seeking to predict the course they may take in the future. She explains the main theories that tackled TRs, namely Neoliberalism, Neorealism and Constructivism, showing how each has its pros and cons.

A valuable book that helps to better understand the spiky path in the relations between Western countries on both sides of the Atlantic. Simoni scans through the transatlantic relations (TRs) seeking to predict the course they may take in the future. She explains the main theories that tackled TRs, namely Neoliberalism, Neorealism and Constructivism, showing how each has its pros and cons. The author analyses NATO’s enlargement, the difficult birth of the International Criminal Court (ICC), and Debt Relief to trace the milestones that shaped the TRs in the post-Cold War era. More recently, she looks through the Arab Spring, the intervention in Libya and Foreign Assistance in Africa where the alliance between both sides of the Atlantic was seriously tested. Simoni correlates the notion of identity with the development of the TRs where the definition of the “self” of each country will draw its policies and scope of cooperation. Hence, she concludes that a realistic understanding of the TRs must consider that those allies are different social and ideological entities which have different perspectives in addressing world’s threats and merits.

To this end, the author structures her book into four parts that include ten chapters. In the first part, she explains how the sudden collapse of the common threat, the USSR, put the TRs in an existential test: a question of survival with the absence of the main reason those relations were built for. Neoliberals are optimistic in anticipating better ties between the Atlantic allies since they share common values of freedom, liberty and democracy. Neorealists are more pessimistic and foresee a decline of TRs due to the absence of the common threat. Constructivists, who have a more comprehensive perspective according to Simoni, managed to analyze the diagram of the TRs from a social context which will lead into forming an “identity” for each state that defines itself through.

Part two examines the emerging challenges put in front of the transatlantic allies that synchronized the American desire to enlarge NATO and the European reluctance to do so. The war in the Balkans cemented the spirit of cooperation among TRs where, for the first time after the creation of the UN, the concept of using force for humanitarian ends was implemented even without authorization of the UNSC. Another landmark in the TRs history was the establishment of the ICC which was culminated in the Conference of Rome 1998. Due to the U.S. definition of itself as a flawless superpower that depends on military force, it refused eventually to sign the agreement fearing its citizens will be prosecuted. This very rift shows the clash of values between Europe and America: the former is more liable to concede some “ego” seeking a better international justice, while the latter is not. In this part, the author shows how social values are intermingled with political and economic ones. In its effort to totally write off the debts of the poor countries, Jubilee 2000 (aided by celebrities like the rock star Bono) approached the United States using religious/Christian tones to cancel the debts, while it used a more secular chord with Europe. Debt Relief disclosed big value gaps and differences between the societies and decision makers of the transatlantic allies: in Europe, Debt Relief was a bottom-up issue started from grassroots movements, while in the U.S., the opposite took place. Neoliberals win this argument since the allies managed to fold their differences.

In part three, Simoni examines how the reactions to the Arab Spring and its aftermath varied between the Europeans themselves on the one hand, and between the Europeans and the Americans on the other hand. Both parties feared that the influx of the immigrants will threaten their peace, yet the Europeans built those worries on security issues related to immigrants while the U.S. on security issues related to political and military threats. Hence, Europe was reluctant to interfere in the Arab Springed countries (including Libya as chapter eight expands) fearing to jeopardize its delicate demographic balance, and the U.S. was eager to intervene spotting some economic developments in the countries that witnessed political changes. In the Libyan Crisis, the Obama administration gave for the first time the lead to the European allies to launch air strikes to topple Colonial Gaddafi. This very twist, Simoni states, revealed a rift in the identity of the disharmonized West where the U.S. now is seeing Europe as equal and independent: the West is far from being a coherent entity. The global financial crisis helped to deepen differences between the allies showing, once more, that they act according to different priorities. The Europeans consider themselves development leaders so they reduced military expenditure and kept donating to assist Africa despite their own financial challenges. The Americans, led by their identity definition, increased military expenditure and decreased donating to development programs. The result is two different identities clashing and weakening the transatlantic one. In part four, Simoni concludes by prioritizing values and identity in analyzing TRs and predicts more tests of the alliance’s durability in the near future.

The book is to be credited for being an academic reference examining a highly important sphere of politics that shapes our politics today: the future of the relations between the Atlantic allies. It gains a special importance at this time considering the expected changes in the TRs with the Trump Administration in power. On the another hand, both the ongoing Syrian war and the annexation of Crimea by Russia in 2014 necessitate serious analyses such as Simoni’s: for the first time after the end of the Cold War, the U.S. has sent troops to Poland and other east European countries. The Kremlin now is on its toes and the transatlantic relations are to prove their authenticity with Moscow’s threats to retaliate against the danger at its doorsteps. This unstable political scene, that is rift with wounds in international affairs, has helped this work Understanding Transatlantic Relation to be a solemn research that maps out the political balances of our world. The book was penned professionally and sought scientific approach shouldering on statistics and numbers in its findings despite the speculative nature of such study. Yet, repeating redundant details in some chapters is a gap in this highly recommended-to-read book. 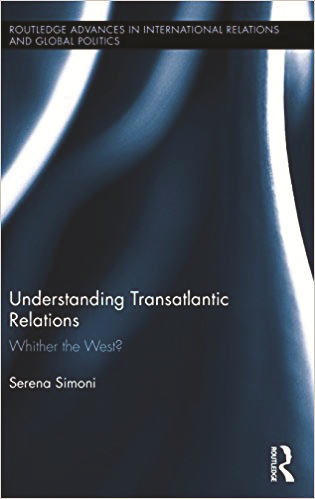