This article argues that today, 17 years after the September 11, 2001 attacks, it is even more important to look at the beginnings of, and to reinterpret, the U.S. “War on Terror” discourse. To do so, this article employs a poststructuralist Critical Discourse Analysis and it advances the debate around the notion of “evilization.” Drawing upon Foucault’s work on the history of madness, it develops the notion of the politics of confinement and situates it in the context of Afghanistan. The article notes that the politics of confinement is illiberalizing and oppressive, contradicting the idea of emancipation functioning behind the U.S. intervention in Afghanistan. Thus, the contradictory discourse of the war in Afghanistan does not serve the purpose of victory as Trump envisages it. 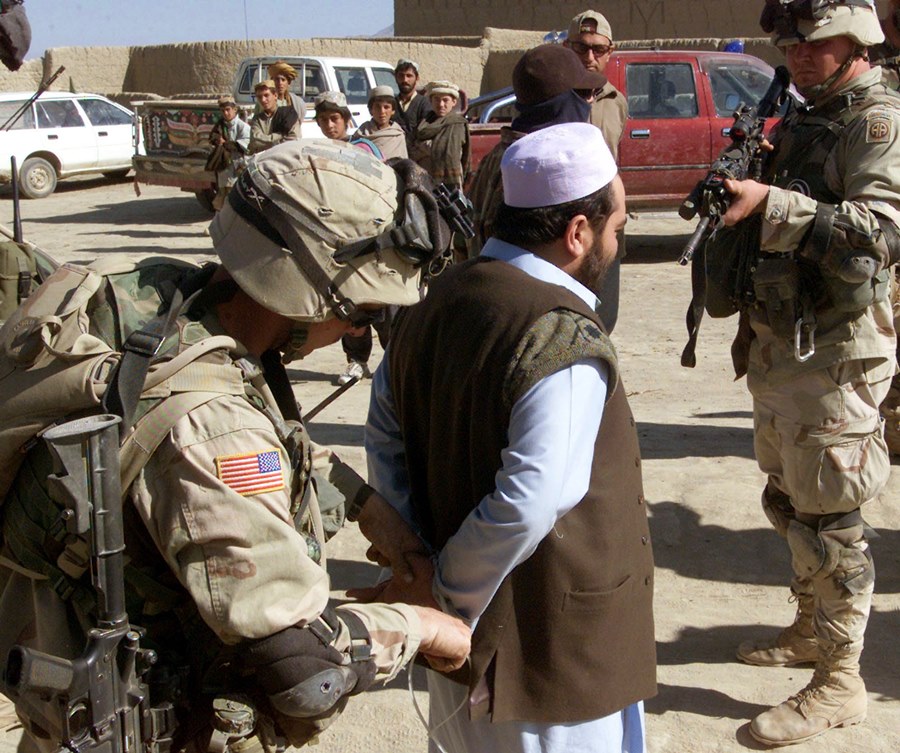 There are aspects of evil that have such a power of contagion, such a force of scandal that any publicity multiplies them infinitely.1

In August 2017, U.S. President Donald Trump laid out his Afghanistan and South Asia strategy, vowing to win the war against terrorism. Trump’s strategy expands the war from Afghanistan and the tribal areas of Pakistan by seeing it in a regional context2 17 years after the September 11, 2001 (9/11) attacks. The events of 9/11 marked the beginning of the (re)construction of terrorism discourse; the fight against terrorism has continued to dominate public, political and academic discourses as one of the most important global problems.3 Given the significance of the terror problem, this article argues that it is even more important today to reinterpret and critically assess the discourse of former U.S. President George W. Bush on the War on Terror (WoT) in Afghanistan. Bush’s pronouncements brought in a new and now dominant discourse (and practice). One of the most noteworthy cracks in Bush’s discourse on the WoT is that it is based on the shaky foundations of what Ish-Shalom, Müller and Sheikh4 call ‘evilization,’ which is the process of appointing or assigning evil.

One of the most noteworthy cracks in Bush’s discourse on the WoT is that it is based on the shaky foundations of what Ish-Shalom, Müller and Sheikh call ‘evilization,’ which is the process of appointing or assigning evil

Evil, as Foucault notes, is indeed powerful, not only as a “contagion” but in its effects as well.5 Since it is historically embedded in religious discourses, the concept of evil ‘solidifies’ and fixes human identities, constituting an identity/difference nexus6 that is deeply divisive. Perhaps Bush realized its power and thus used the term frequently after 9/11. The U.S. discourse on the WoT in Afghanistan during the Bush presidency defines and identifies 9/11 as an evil act that was perpetrated by al-Qaeda against modern, freedom-loving civilization. Framing al-Qaeda and the Taliban as ‘evil’ however, is problematic, and has had far-reaching implications. This article contests the idea that evilization in the Bush discourse on the WoT in Afghanistan was ‘rhetorical’ or merely a securitization speech act; instead it seeks to advance the debate around evilization by further problematizing president Bush’s discourse on terrorism and the war in Afghanistan. In this process it asks two equally important questions: (i) Why does evilization function as part of a wider de-politicization in Bush’s discourse on terrorism and the war in Afghanistan? And, (ii) How is the (evilized) de-politicization constitutive of the spaces and politics of confinement?

The article employs a poststructuralist Critical Discourse Analysis (CDA) and first outlines the theoretical and methodological profile of the study. Second, it sets the scene by unpacking Bush’s discourse. Third, utilizing scholarly work around the evilization process and drawing upon Nietzsche’s work on morality, it contextualizes the notion of ‘evil’ and argues that evilization is part of the de-politicization process. Finally, the article argues that understanding evilization as a securitization speech act may not suffice to reveal the confining power of Bush’s discourse on terrorism; therefore, it provides a brief description of Foucault’s archival work on psychiatry7 and then applies his ideas to the post-2001 Afghan context.

Understanding the Department of State