World Energy Trends presents a detailed analysis of the energy policies of significant regions. It can be considered a reference book that fills an important gap in the literature. It is hard to follow specific regions’ reserves and policies together, as there are different sections for each of the topics. The sections are designed to allow readers to compare regional resources in one section and the energy policies of the respective states in the other section. The volume contains many helpful charts and maps to elucidate the resources of the regions and their import/export rates, which can help readers easily understand the material narrated in the chapters. This book is a significant resource for readers interested in energy policies and anyone with an interest in international political and economic affairs.

Energy has always been at the center of world policies and is the main trigger for most international conflicts. To study the key issues affecting energy policies, Kemal İnat and Büşra Zeynep Özdemir Daşcıoğlu bring to the audience an edited book published by SETA Foundation. Dünya Enerji Trendleri: Rezervler, Kaynaklar ve Politikalar (World Energy Trends: Reserves, Resources, and Policies) covers in detail the energy reserves, resources, and policies of specific countries and regions across the world.

The book is divided into four sections. The first two provide a general background on world energy trends and how they affect Turkey. The first section highlights the radical changes that have occurred in recent years in global energy supply and demand. In this section, Kemal İnat contends that these changes were caused by the struggle to address climate change and a surge in policies intended to reduce foreign dependency on energy supply. The second section covers Turkey’s energy policies and argues that Turkey’s foreign dependency in the energy sector is the driving factor behind them. Here, Ismail Kavaz focuses on the strategies Turkey is using to reduce its foreign energy dependency, stating that it is important for Turkey to tap its potential sources of renewable and nuclear energy. Concurrently, Kavaz touches upon Turkey’s drilling operations inside and outside the country, and their positive effects on the Turkish economy.

The third and the fourth sections address the energy policies of eleven key regions: North America, the Middle East, Russia and Caucasia, Europe, North Africa, East Asia, and Australia, Middle Asia, Latin America, and the Caribbean, South and Southeast Asia, and SubSaharan Africa. In the third section, the authors analyze the energy reserves and resources of these regions in-depth, focusing mainly on fossil energy resources, nuclear energy, and renewable energy. The fourth section discusses the energy policies of these regions in detail.

North America, which is considered the mainland of the production and trade of energy, is the first region that the book addresses. In the first chapter, Gloria Shkurti Özdemir argues that the increase of unconventional oil and gas production in North America has not only been a turning point for the global energy landscape but has also increased supply security on the continent, which has resulted in a change of energy policies. For example, the U.S. has decreased its imports and is now following policies that increase its energy exports.

World Energy Trends also discusses the energy reserves and policies of the Middle East, which is ranked the first in terms of hydrocarbon reserves. The chapter is written by Kemal İnat and Mustafa Caner first contextualizes the energy trade and consumption rates, then examines cooperation between the countries in the region. Nearly 50 percent of the energy production in the world takes place in the Middle East, but the conflicts between the states in the region make it difficult to provide the necessary stability for energy security. The chapter also analyzes the sanctions that have been imposed there and their impact on the policies of the countries of the region. Chapter two of the fourth section, written by Büşra Zeynep Özdemir Daşçıoğlu, analyzes the energy policies of Europe, the global leader in energy demand, by categorizing its countries from an economic perspective. Daşçıoğlu discusses the region’s dependency on Russia and the policies Europe has undertaken to reduce this dependency.

Latin America is another region with important potential in terms of both hydrocarbon and renewable energy reserves. Gloria Shkurti Özdemir contends that, despite its promise, political instability negatively affects the region, preventing it from using its potential energy.

Asia is another important region that deserves special attention, especially considering the rising importance and impact of countries like China and Russia in international energy policies. This is touched upon in many of the chapters, and the Asian countries are also discussed separately in the last chapters of the book. Most of the energy needs of East Asian countries are covered by imports. Therefore, Yunus Furuncu notes, the East Asian countries are adopting policies to increase their energy production. As a result, they are investing in coal, nuclear energy, and renewable energy. China and India, the countries with the biggest energy demand in the world, provide for their energy needs with coal, which negatively affects their carbon emission. Chapter five of the fourth section examines the Belt Road Initiative and its effects on the region’s energy infrastructure. Furuncu addresses the energy policies of Australia, a significant LNG trader.

Russia has great influence over Central Asia and the Caucasian regions. According to Çağlayan Yıldız, the Central Asian countries are attempting to benefit from renewable energy, even while they take advantage of their fossil energy sources and plan to increase their energy exports. Although the level of development of the Caucasian countries is directly proportional to their domestic resources, almost all of them depend on Russia in terms of energy trade; this makes the policies of the countries complicated. Yıldız’s chapter analyzes the steps these countries are taking to provide demand security, which remains vulnerable to Russian threats.

The Southern Asian countries, covered by Büşra Zeynep Özdemir Daşcıoğlu and Münevver Yüksel, face the issue that is about providing electricity to their citizens. They have potential in terms of renewable sources of energy but have not invested extensively enough in these sources to reach their potential. Russia’s energy policies are defined in the article written by Meryem İlayda Atlas. She contends that Russia is an important player in the global energy trade and global energy security. Russia views energy policies and international relations as inseparable and uses energy as a tool against other countries. Russia’s main strategy is to dominate the energy market with its national companies. Atlas notes that Russia’s strategy disturbs energy buyers, especially the Europeans.

The continent of Africa is analyzed in two parts: Northern and Sub-Saharan. Northern Africa, especially after the Arab Spring, was negatively affected in terms of security. In chapter 10 of the fourth section, Furkan Polat explains that some countries like Libya, Egypt, and Algeria have rich energy resources. However, the Arab Spring has negatively affected these countries, making the region unstable and preventing these countries from using their energy sources efficiently. The Sub-Saharan countries’ policies are also analyzed by Safa Uslu, who notes that the region has developed significantly, but still faces challenges in terms of reaching its energy resources. This could be surmounted by investing in renewable energy, Uslu indicates.

In conclusion, World Energy Trends presents a detailed analysis of the energy policies of significant regions. It can be considered a reference book that fills an important gap in the literature. It is hard to follow specific regions’ reserves and policies together, as there are different sections for each of the topics. The sections are designed to allow readers to compare regional resources in one section and the energy policies of the respective states in the other section. The volume contains many helpful charts and maps to elucidate the resources of the regions and their import/export rates, which can help readers easily understand the material narrated in the chapters. This book is a significant resource for readers interested in energy policies and anyone with an interest in international political and economic affairs. 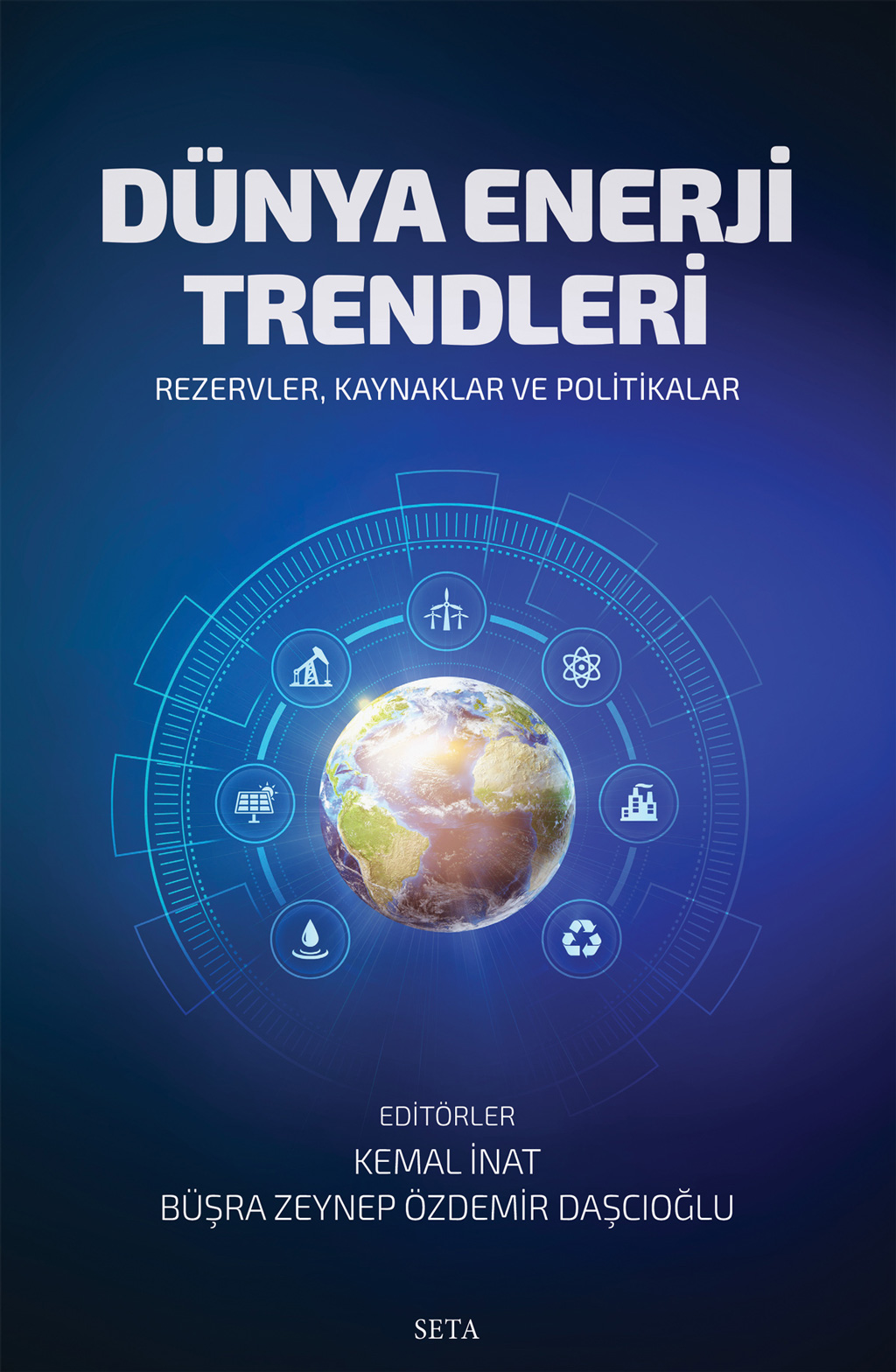 The Energy Equation in the Eastern Mediterranean