Although the withdrawal of American troops from Afghanistan after twenty years was not surprising for many, it nevertheless generated important controversies in American political circles. One of the most important questions is how the Taliban emerged as the victorious party in the Afghanistan conflict a short time after it had been rooted out in 2001. In Negotiating Survival, Ashley Jackson attempts to provide an early response to this question by bringing a mostly ignored actor, the Afghan people, and their interaction with the Taliban movement into the equation. Indeed, as Jackson notes, the great bulk of the literature on the Afghanistan conflict is devoted to security affairs, while the “voices of civilians living under the Taliban (and, to some extent, voices from the Taliban as well) are all too often absent from contemporary narratives of conflict” (p. 9).

Filling this gap in the literature, Jackson explores the bargaining dynamics between the Taliban and Afghan civilians and analyzes how the Taliban was able to win the people’s support despite its widely condemned ideology. Jackson’s theory of civilian-insurgent bargaining shows that while Taliban civilian bargaining is “deeply lop sided, myopic, unpredictable, and high risk,” both sides have certain interests to gain through negotiation. The Taliban bargain with the civilians for political legitimacy, external recognition, and compliance during wartime. The civilians’ main benefit from such bargaining is survival. Secondarily, they receive certain collective benefits, including justice, education, and foreign aid, as well as certain individual benefits (pp. 26-30). Therefore, the author explains the Afghan conflict through constructive analysis rather than relying on traditional security- and ideology-focused theories.

The chapters of the book interactively explain four elements that are critical in wartime bargaining: violence/coercion, persuasion, incentives, and social capital. To be used within the bargaining process, Jackson argues, violence should be strategic and selective. Indiscriminate violence is the weapon of the weak, indeed, when the Taliban was weak and under military pressure, their violence was more widespread and less selective, as the group’s primary interest was organizational survival. However, once the Taliban insurgency transformed into a “government-in-waiting,”, especially after 2014, its coercion and violence took on a more predictable and state-like appearance (p. 80). Jackson sees Taliban violence as having primary and secondary targets. Primary targets are those whose actions merit punishment, for example, civilians who cooperated with international forces; while the secondary but more important targets are the audiences of the violence‒the wider civilian population, which must decide which side to support (pp. 32-34).

The second dynamic in civilian-insurgent bargaining is persuasion. The Taliban sought to persuade Afghan civilians by justifying their rebellion as a righteous cause with religious, political, and moral arguments ‒a positive storyline‒ while delegitimizing the Afghan government as a “corrupt, inept, un-Islamic, morally bankrupt puppet of the West”‒a negative storyline. The Taliban’s persuasion campaign can be seen in the group’s extensive use of social media, e-mail, and messaging apps, as well as its demand for fairer media coverage. Nevertheless, the important characteristic of the Taliban’s use of persuasion is that it “cannot be entirely divorced from coercion and violence.” If civilians are overtly oppositional, various forms of armed persuasion and targeted violence may be adopted to ensure compliance (pp. 105-106). Civilians also use persuasion in their bargaining with the Taliban, but it is necessary to point out that their ability to persuade the Taliban to allow girls’ education, to open roads, or to allow foreign aid agencies is constrained by the insurgents’ objectives and conditions. Civilians may justify their arguments in Islamic terms to persuade the Taliban, but when the Taliban feels that military objectives are at stake and civilian demands contradict too sharply with the group’s ideology, the civilians do not have many options. Nevertheless, Jackson argues that bargaining is not “an isolated interaction, but one move in a longer game,” and a failed negotiation is still critical “to build relationships and shape future bargaining dynamics” (p. 176).

Incentives comprise the third critical variable in civilian-insurgent relations. Jackson argues that the Taliban needs to provide security, goods, services, and economic opportunities to get civilian support and to embarrass the Afghan government and international forces for their failure to offer security and economic well-being. In this regard, Jackson points out that a set of civilian-insurgent relations are a sort of social contract. Nevertheless, unlike the Afghan government, which was supported by foreign aid, the Taliban lacks the economic capacity to provide state-like incentives. The provision of incentives explains why the Taliban, over time, softened its position regarding international aid agencies and development projects. During the first years of the insurgency, the Taliban attacked aid projects and basic services but later saw them as bargaining chips and even agreed with government agents on the provision of some services (p. 99). Here the Taliban’s behavior was selective, as civilian workers dealing with more technical occupations, such as health workers, came under less pressure than others who needed to be controlled ideologically ‒like teachers (pp. 166-170).

Finally, Jackson emphasizes the importance of social capital in civilian-insurgent bargaining. As the Taliban and the Afghans are “enmeshed in the same cultural, social and kinship fabric,” (p. 7) Jackson argues, the common religious, tribal, and even family ties eased the bargaining conditions between these two parties. Civilians were “more reliably sympathetic to and less suspicious of fighters from their community,” which helped the Taliban earn civilian compliance. Yet social capital is a tricky variable, as the Taliban wants to benefit from tribal and/or ethnic ties without allowing these ties to undermine its claim to represent all Afghans (pp. 145-146). Similar to violence, persuasion, and incentives. Therefore, the balance between military/political success and civilian compliance is critical in terms of social capital.

Negotiating Survival contributes to the literature on the Afghan war by painting a picture quite different from the traditional viewpoints that can be found in Western academia and media. Traditional discourse either focuses on how to defeat the Taliban militarily or explores the ideological fanaticism in the movement. Therefore, such studies do not envision the Taliban as a negotiating partner‒a blind spot that entails military conflict as a permanent aspect of the Afghanistan problem. In contrast to these viewpoints and in parallel with constructivist IR theory, Jackson emphasizes that it is possible to change Taliban behavior through rational interaction, arguing that this process had already started at the domestic level between civilians and insurgents, and foreign governments and international organizations may take a lesson from this process by seeing the Taliban as a rational actor with which to start a diplomatic process, rather than relying solely on military means to resolve the challenges of governing Afghanistan. However, as the book’s title implies, Jackson mainly addresses negotiations that take place in the context of conflict conditions, where the parties’ main interest is survival. When conditions in Afghanistan stabilize, and the Taliban holds power over time, political, economic, and ideological interests will need to be considered too; these are likely to make negotiation with the Taliban more complex. 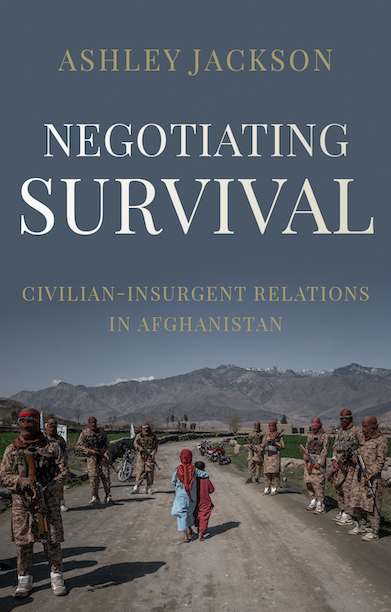