Scholars of the region have pushed back against this broad-brush portrayal, so popular among Western journalists, for years. This is natural—what academic likes having his or her subject reduced to clichés and misunderstandings?—but it can be a little precious. The casual reader does not have the time or inclination to understand Turkmenistan’s murky politics; its damaged sense of history and identity; and its strange legacy of nomadic tribes and Soviet factories. This is not an easy place and a “Central Asian North Korea” may be the best shorthand there is.

Sebastien Peyrouse, Senior Research Fellow with the Central Asia-Caucasus Institute, has produced a book which brings out the extent of Turkmenistan’s repression and dysfunction with sober and consistent clarity, without shading into either caricature or polemic. This invaluable volume is clear enough for the general reader but contains a wealth of detail and insight for specialists.

Peyrouse knows Turkmenistan and plainly cares about it. This involvement, along with his sober style, brings additional weight to his comprehensive investigation of the country’s corrupt, incompetent and grandiose rulers—and the people who have had the misfortune (in most cases) to be ruled by them.

What becomes clear is how little the country has changed under Gurbanguly Berdimuhammedov, the former dentist who was unexpectedly elevated to the presidency after the death of Saparmurat Niyazov, the ex-Soviet autocrat, in late 2006. Berdimuhammedov was touted as a reformer because he undid some of the more bizarre trappings of Niyazov’s personality cult, such as the giant golden statue, the days of the week named after his family, and the ban on opera as they were note seen as in line with the national mentality.

There are two major problems with this notion of (as Peyrouse puts it) Berdimuhammedov as Khrushchev to Niyazov’s Stalin. Firstly, the personality cult remains largely intact, and is now supplemented by that of Berdimuhammedov, who is now also known as the Protector, not so very different to Niyazov calling himself Turkmenbashi, the Father of the Turkmen. His “era of great revival” may be a subtle linguistic riposte to Niyazov’s megalomania, but almost all the trappings of the Great Leader remain.

Secondly, Berdimuhammedov has taken almost no steps in addressing the country’s real problems—the collapse of its social infrastructure and services, the poverty, disease, corruption, environmental destruction, and spiritual oppression— which are his predecessor’s real legacy. With understatement, Peyrouse says that this destruction has “in part mortgaged the country’s future”.
What stands out, too, is not just the government’s brutality but its incompetence, and the ways in which Niyazov’s mercurial changes of heart had enormous repercussions for ordinary citizens (Berdimuhammedov, thankfully, appears less capricious).

For instance after independence, as part of Niyazov’s insistence on utterly dismantling the Soviet legacy, the government decided to switch alphabets from the Cyrillic to the Latin. But the lack of knowledge of the new alphabet and the dearth of literature available in it caused chaos. Peyrouse notes that “[t]he old Cyrillic textbooks were actually banned before the new Latinized ones arrived to replace them”, exacerbating the already dire situation in schools.

Nor were Niyazov’s caprices confined to education. He “imposed a specific date for planting [cotton] regardless of whether the weather permitted.” Mosques which failed to uphold his personality cult were demolished. When cases of plague and tuberculosis were on the rise, Niyazov did not try and address the country’s lack of qualified medical professionals or appeal for foreign aid. He simply ordered doctors not to report it, built a “presidential fitness road” in the desert and ordered the health sector to rely on the Ruhnama, his book of wisdom, for solutions.

Although such bizarre decisions ended with Niyazov’s death, the author argues that the overall climate has hardly changed under the new president. For instance, the government’s response to the swine flu fears in 2009 was simply to block information about it; brochures providing information about the flu were withdrawn from circulation. Foreign medical agencies continue to be harassed or blocked from working.

This collapse in the country’s health system, from the Soviet era’s creaking but robust system to a dysfunctional medievalism in which the government cannot afford vaccines and replaces thousands of healthcare workers with unqualified conscripts, is one of the bleakest episodes of Turkmenistan’s post-independence history. Peyrouse provides a detailed, highly readable analysis of the folly and paranoia which has led to this appalling situation.

One of the book’s biggest contributions is revealing how this paranoia feeds from the warped sense of national identity and history which Niyazov, for many reasons, constructed after the fall of the USSR. The Soviet tradition of “museumification”, in which national cultures were stripped of anything political and reduced to quaint, unchanging folklore, was intensified under Niyazov. Turkmen culture and history were turned into a hermetically sealed parade of perpetual independence, contiguous on its current territory, and unaffected by the region’s waves of ethnic and cultural interchanges.

The independent Turkmen authorities have created a mythologized national history in which the Soviet legacy—which after all is one of colonization, collaboration, forced industrialization and a compulsory end to the Turkmen’s nomadic lifestyle—is expunged. The irony, as Peyrouse argues, is that the Soviet Union was responsible for most of the elements which now constitute Turkmenistan’s independent identity. Territory, language, industrialization, and even the notion of “the Turkmen” as a homogenous ethnonational group were all products of the USSR. The author covers this historical detail with skill, producing an overview which is thorough without being dense.

Niyazov’s determination to demolish the USSR’s legacy and erect a new national identity of “Turkmen exceptionalism” has caused enormous damage as the positive aspects of the Soviet Union—healthcare, education, technical skills, administrative competence—have been swept away along with the negative aspects. Peyrouse draws a discomforting but accurate parallel not with other post-Soviet autocracies like Uzbekistan, but with Pol Pot’s Cambodia and Mao’s China.

On international issues the book is also assured. This aspect of Turkmenistan is more widely known and there is little ground-breaking here, but Peyrouse covers Ashgabat’s relations with all the key local and international players well. In particular he provides a very useful assessment of the country’s gas export strategy, which is evolving and still complex.

The chapter on gas highlights a commonly overlooked fact: that Turkmenistan’s physical and human infrastructure is simply not up to the challenge of fully exploiting the country’s enormous gas reserves. The habit of both the current and former president of regularly sacking key energy officials, as well as blocking international energy companies from full contracts for onshore fields, makes it extremely difficult to help the government realize its grand, multi-vector energy export strategy.

One section which could have been expanded is on the role of the West, and in particular the choices which European and US policy makers face when dealing with this repressive and secretive regime. Peyrouse notes that “[t]he question of choosing whether to defend human rights or economic interests continues to impede European influence” but does not explore this tension in much detail, or offer his own proposals. Should the EU encourage its companies to invest despite the regime’s awful human rights record? Should it sanction the government and seek to pressure it into reform? True, this book is analytical and not prescriptive, but it would be interesting to hear Peyrouse’s own informed take on this question.

The analytical nature of the book is its greatest strength. There is much to be angry about in Turkmenistan, but the author’s exposition of the ruling elite’s appalling behavior is all the stronger because of its balance and emotional distance. The work also benefits from Peyrouse’s experience on the ground in Turkmenistan (still a rare attribute among English-language writers) as well as his deep knowledge of Central Asia and its past. It provides comprehensive and illuminating insights into a hidden country, and will undoubtedly be a book which specialists and non-specialists alike will come to rely on. 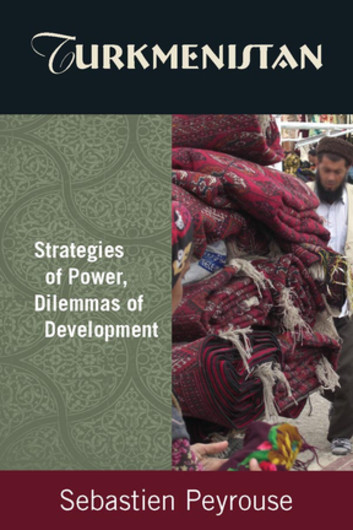