Following the publication of the Summer 2021 special issue “Regional Developments and Challenges,” Insight Turkey coordinated a panel where distinguished participants shared their views, to discuss the latest developments in the energy context in the Gulf and the Eastern Mediterranean. The panel, which was held online due to the COVID-19 Pandemic, was broadcast live on YouTube and other social media platforms. 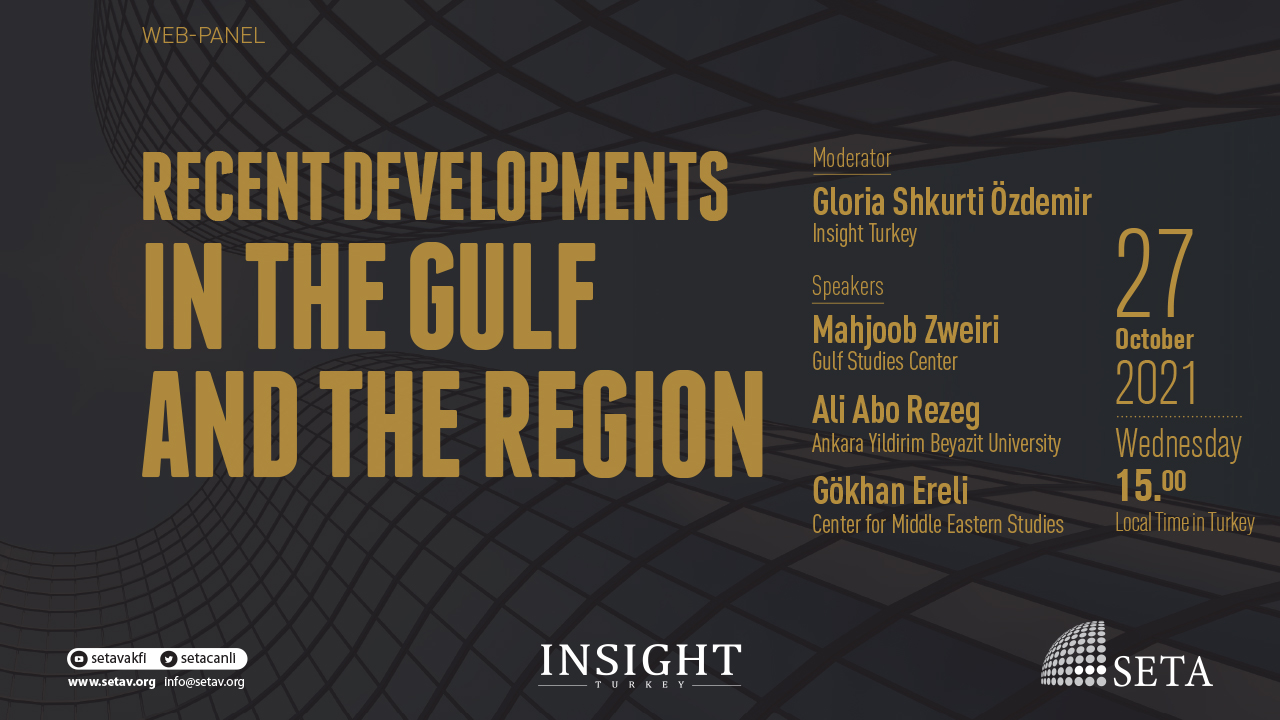 In his speech, Mahjoob Zweiri explains how the Iranian regime has implemented various complex internal and external strategies to secure the regime against threats and ensure its survival. Zweiri begins his speech with the position and importance of Iran in the region. In his article, the panelist aims to explain the main strategies used by Iran to survive and reduce the impact of all pressures on the regime. According to Zweiri, the regime has been trying to survive by mobilizing people behind it with the anti-American slogan since 1980. At the same time, Iran defends the Palestinian cause by taking the Palestinian cause on its shoulders, which brings more support to the Iranian regime.

Zweiri continued his speech with Iran moving inside and opening the elections. Iran brought in a very charismatic leader, a religious figure named Mohammed Khatami, but more nationalistic, more modern, and better-looking in politics. Khatami emerged as the Iranian president and occupied the media and tried to present Iran in a different way by talking about Iran in the west at that time Clinton started a debate with Iran to open a debate and this step to elect Mohamed Khatami was a wise step. The regime survived as it faced economic and political internal pressures, and it opened up the electoral platform to avoid the consequences. That's why Iran proposed a dialogue of civilizations, and in 2001 the United Nations adopted it as the main slogan represented by Muhammad. However, with the emergence of a new photo of Nathan's nuclear website, every success Mohammed Khatami had actually done was destroyed, and Iran had to defend itself again to explain what was happening in this nuclear space. Mohammed Ahmadinejad, who came to power with very radical rhetoric after Khatami, started negotiations with the Americans in the last year of his presidency.

Zweiri, who generally focuses on the effects of the changes that took place at the beginning of the 21st century in Iran's politics and shifting its course from revolutionary conflicts to survival efforts, concludes that by arguing this is just a picture of how the regime actually reacted to the difficulties and does not try to be ideological.

Ali Abo Rezeg focuses on Qatar's position in the region and reviews the dynamics and geopolitical interests that have driven Doha to adopt a pro-change policy. Rezeg begins by explaining why Qatar is Afghanistan's biggest winner. Rezeg argues that the Taliban leaders felt they were negotiating in an environment hostile to Islamic politics in the region and around the world, but they did not feel the same when negotiating with the US in Qatar.

Another point Rezeg made was that Qatar's foreign policy towards the Arab Spring partially tarnished this image, as Qatar was the only Arab monarchy that fully supported the revolutionary wave that had hit the Arab region since 2011. The US and Western powers on the one hand and Islamist groups on the other want to use Qatar as a reliable mediator for negotiations. Second, Qatar, as a country that has long supported the revolutionary change in the Arab world, is at least doing something inside the democratic process.

The third dynamic that Rezeg focuses on is the shuttle diplomacy of Doha and neighboring countries with successful meetings. For example, in its relations with its neighbor, Egypt needs Qatar just as Qatar needs Egypt. While Qatar has large investments in Egypt in the country, regional players are well aware of Egypt's political, cultural and economic weight.

Consequently, in his speech to understand the reasons behind Qatar's pro-revolutionary policies, Rezeg bases it on many driving and intervening factors. According to Rezeg, the main dynamic behind Doha's pro-change positions is the effort to make more impact. Doha's attempt to counter Saudi hegemony in the region is also important and is one of the main reasons for Doha's behavior. Qatar's refusal to act as a passive or dependent entity in the Gulf is also an important dynamic. It is underlined by Rezeg that competition with the UAE is also one of the main geopolitical motives behind Qatari policies. In addition, Qatar benefits from its close ties with the US and various Islamist groups to gain more power and influence.

Rezeg ends his speech in which he talks about the role played by Qatar in the Arab Spring, arguing that Qatari politics is the personal diplomacy that Henry Kissinger talks about in his book. Diplomacy, which is important in personal decision-making and political issues, actually demonstrates Qatar's soft power.

Gökhan Ereli focuses on Turkey's gulf relations, recent developments, and recent political, social, and military relations. According to Ereli, just as Turkey and the Gulf relations were redefined after 2010, there are reasons for this redefinition in 2017 and 2021, locally, regionally, and internationally.

First of all, Ereli claims that politically and militarily, the relations between Turkey and the Gulf countries, and the movements and policies in conflict zones, especially in Syria, Yemen, Libya, the Eastern Mediterranean, and the Horn of Africa, play an important role. There are many reasons why some countries in the Gulf have acted together since the 2010 Arab popular movements. Saudi Arabia, the United Arab Emirates, Bahrain, and Egypt in the Gulf supported the military actors and thus prevented the popular demands on the countries in the conflicts. In the Horn of Africa, commercial and geopolitical competition continues between Turkey and the Gulf countries. Therefore, activities in conflict zones such as Yemen, the eastern Mediterranean, Syria, and the Horn of Africa caused the severing of relations between Turkey and the Gulf. However, while Turkey's trade with the Gulf Cooperation Council was not severely interrupted during this period, the total trade volume, which was around nine billion dollars in 2010, doubled for a period of time, reaching 20 and 21 billion dollars in 2017. Ereli claims that there may be many political disruptions in relations, but this does not prevent countries from seeing each other as trading partners.

After the Arab popular movement in the second half of 2010, there were very important developments in the region that affected both Turkey and the Gulf. For example, some Arab countries have launched an embargo against Qatar, resulting in a more contradictory regional landscape both locally, nationally, and internationally. Another example is the murder of Jamal Khashoggi and the international reaction it created. Ereli also adds the normalization of relations with the United Arab Emirates and Israel to another important development that also affects Turkey and the Gulf nations. The latest development example given by Ereli is the global pandemic and the struggles in the conflict zones between Turkey and the Gulf countries, as well as the economic contraction and economic illustrations of the gulf countries, which have greatly declined and deteriorated.

Ereli concludes his speech by claiming that with the emergence of structural and regional developments, the active and interventionist attitudes of the gulf countries have deteriorated to a large extent, on the other hand, Turkey has started to use its national resources more actively in its foreign policy and has followed a more active foreign and military policy in the region. As a result, the relations between Turkey and the gulf offer great opportunities both locally, nationally, and internationally and have the potential to include positive developments for each country participating in these relations.