Insight Turkey coordinated a panel with the contribution of distinguished speakers, in which a comprehensive framework of Turkey's Defense Industry transformation and the changing patterns of military strategy were discussed. 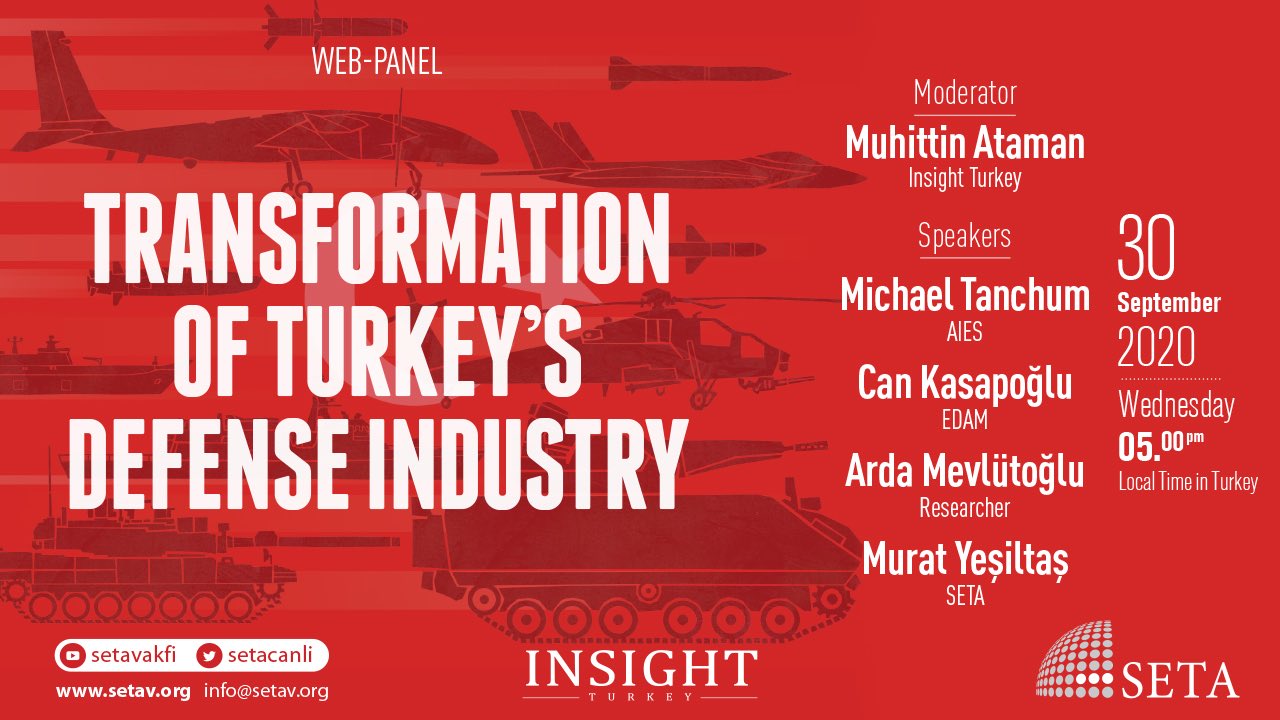 Murat Yeşiltaş covered the changes in both Turkish military posture and strategy, stressing the conditions at the international, regional, and domestic levels that changed Turkish perception of foreign policy, and its posture and therefore influenced the changes that happened in its industrial defense sector. According to the panelist, the transformation in the international arena has allowed Turkey to recalibrate its military posture at both regional and extra-regional levels, following the easing of the much restricting security structure that was present before. In the regional sphere, many important developments also affected Turkey’s posture, the changes brought by the Arab Springs, the diffusion of the Syrian branch of the PKK in Northern Syria, as well as the increased regional competition made helped the Turkish defense stance shift. At the domestic level, the changing civil-military relations had an impact on the shift, in particular after the 2010 and after the failed coup attempt of 15th July 2015, the Turkish army is not the sole decider in terms of national strategy and security anymore, but the ultimate authority resides in the hands of civilian power.

Yeşiltaş went also on to explain the Turkish defense strategy, highlighting the importance of autonomy in terms of the arms industry so that its international posture can be supported by a capable defense sector. According to the author, Turkey is also trying to strengthen its regional power status in light of regional and international competition as well as balancing its regional competitors.

In the concluding remarks, the author specified the problems that Turkish posture will face in terms of sustainability of its military and strategic designs in terms of economy, as well as the risk of overstretching both in operational and economic fields.

The panelist introduced the idea that Turkey’s foreign policy transformation is to be understood within a greater framework rather than just the AK Party's rise to power and the transformation that has taken place under its government. According to Tanchum, Turkey is going through a reorientation in its foreign policy objectives, aiming at becoming a trans-regional power, and developing interconnectivity between Europe, Africa, and the Middle East. To support this objective Turkey has developed a more dynamic military posture, transformed its navy into a blue-water fleet, and relied upon forward basing. Tanchum underlined that the end of the Cold War, the structural conditions of the Turkish economy and the size of the country, as well as its geographic proximity to Europe, Africa, and the Middle East, would have made such a change inevitable for any government.

This reorientation of foreign policy has also been favored by several changing conditions in the region, such as the U.S. intervention in the 1991-2003 period which obligated Turkey to deal with the side effects of U.S. actions, and coincided with the rise of the AK Party to power. This reorientation under the AK Party government was also caused by other two factors that took place between 2015-16. The events that had an important impact were the Battle of Kobane and therefore the possibility of the formation of a Kurdish statelet under the Turkish Southern border as well as the 2015 failed coup. This combination, according to Tanchum, left Turkey fending for itself, deepened the shift in its foreign policy, and caused a stronger integration between the public sector and its defense industry.

The author went on to conclude by highlighting the current Turkish position in the region, specifying how Turkey is trying to balance between an inner and an outer core, as well as dealing with regional and extra-regional powers, pointing to a risk of overstretching of Turkish resources and underlining the need to promote greater interconnectivity in the area.

In his opening remarks, the panelist spoke of the strong development that has taken place in the Turkish defense industry and the much higher number of projects undertaken by the industry and bureaucracy. These higher efforts are also represented in a higher export volume in defense items as well as in the good performances of its vehicles. Kasapoğlu spoke of how the current Turkish defense industry has specialized in the production of unmanned aerial vehicles, especially the Bayraktar drone, which has recorded outstanding performances in the theatres of action.

The rise of the Turkish domestic defense industry has been an important topic ever since the Cyprus intervention in 1974 and the following embargo, and currently, Turkey has a strong domestic arms industry. The growth of this industry has been facilitated by a strong integration between bureaucracy and the private sector, which has allowed the producers to directly adjust the performance of their items by utilizing data collected from their employment in the field. Another element that has contributed to the rise of the defense sector has been the integration of academia into the arms industry, with a growing interest of the youth in the military industry of the country. Though the picture is positive, Turkey is facing still some problems with higher-end technological products, like fifth-generation warplanes, and because of such impingements, the country is still forced to rely on foreign partners to develop highly technological products.

The panelist started his speech by explaining the technical nature of modern airpower, differentiating the different kinds of generations, and listing what technical and technological capabilities contradistinguish a 5th-generation combat aircraft. According to Mevlütoğlu, a modern air force needs nowadays not only to have high capabilities for its aircraft but also interoperability between the aircraft and the ground assets, by promoting data integration and sharing under almost any circumstance. In the air force department, Turkey has been recording important steps, such as the excellent performances recorded by the Bayraktar TB2, which has been employed in many different fields and in various roles.

The author spoke of the Turkish defense industry has undertaken many projects which are challenging in nature but constitute a gradual change towards the improvement of the air forces. Projects like the MNU TFX, a 5th generation combat aircraft, as well as the Akıncı project represent important milestones for both Turkish industry and combat forces.

The panelist finally concluded by highlighting the difficulties as well as perspectives of the country in the air department. Highlighting how the Turkish air force has gained a lot of experience from the regional competition, it has also shown how its neighbors are also moving towards the modernization of their fleets. According to Mevlütoğlu the challenges that lie ahead are technical in nature, requiring Turkey to collaborate with foreign countries to keep up with technological advancements as well as the need to maintain a sizable workforce of experts that can work on and improve the status of the defense industry.

The challenges in the international arena as well as regional panorama have prompted a shift in Turkish foreign policy in the last thirty years. The U.S. interventions, structural conditions of the country as well as regional and domestic changes have now brought Turkey to be a more assertive and outward-looking country. These new military stance has been well represented by Turkish interventions in regional and extra-regional scenarios, and the development of a “forward basing” stance. These developments have been permitted also by its bourgeoning defense industry, which responded positively to the challenges of the last decades, growing in size and technical capabilities. In light of these advancements the country also faces a series of new challenges of technical, political, and economic nature that need to be faced to allow for greater autonomy of the country and its armed forces.

Insight Turkey hopes the panel was fruitful and provided a better understanding of the transformation now taking place. You can find the full panel on our YouTube channel.

The New Era in Turkish Foreign Policy: Critiques and Challenges