Türkiye as a Stabilizing Power in an Age of Turmoil

In Türkiye as a Stabilizing Power in an Age of Turmoil, Fahrettin Altun, Turkish Presidency’s Director of Communications, focuses on Türkiye’s role in the global world order. He presents a detailed analysis of President Recep Tayyip Erdoğan’s foreign policy regarding civil wars, humanitarian tragedies, and structural shifts in neighboring countries, detailing the basic parameters of Türkiye’s policy and the challenges the global system has faced over the past two decades.

Altun provides a critique of the contemporary international system and explicates how it is naturally possible to minimize conflict and instability by utilizing Türkiye’s experiences and proposals for reforming the international system. He notes Türkiye’s successful humanitarian assistance programs as a model for stability in an era of a global shakeout.

Due to regional and international developments in recent years and Türkiye’s role therein, Altun re-conceptualizes Türkiye as a “stabilizing power” that seeks a “fairer world” and contributes to the stability of large regions from Syria to Libya and Africa to Cyprus. The author highlights the need for reforming the current world order, stressing that the existing order favors only the self-interests of the great-power countries.

Türkiye as a Stabilizing Power in an Age of Turmoil consists of four chapters and a conclusion. In the first chapter, “The Failure of the International Community in Humanitarian Assistance,” Altun reveals the path and results of the U.S.-dominated world order and discusses the problems and failures of states due to the COVID-19 pandemic and its worldwide impacts. Altun delineates a correlation between current conflicts with humanitarian tragedies and the world atmosphere after 9/11 incident. He argues that the terrorist attacks created global solidarity, yet the aggressive position of the U.S. in regard to the attacks spawned irreversible conflict globally. In addition to the economic crisis that the world faced in 2008, the invasions of Afghanistan and Iraq during that period caused more tragedies in the region.

Altun claims that despite its normative discourse and promises, present-day international politics is grounded in the self-interests of a few players in the system, and the effectiveness of international institutions depends on how much they correspond to the interests of those players; wars, humanitarian tragedies, and conflicts are not the results of those discourses and promises, but the results of those players’ actions. From this perspective, the author concludes that the U.S.-dominated world order is limited to certain geographies that draw the interest of those powers, while other locations like Africa and the Balkans are abandoned to experience ethnic conflicts, civil wars, and humanitarian tragedies.

In the second chapter, “The Failure of International Institutions,” Altun lays out the reasons for Türkiye’s push for reforms to international institutions such as the United Nations (UN) and NATO, starting with the expansion of the UN Security Council. He expresses the need for a new approach in the current world system for the institutions due to their failure to handle problems, challenges, and regional and international conflicts. Altun also explores the growing malfunctions of international institutions and underlines that the UN has drifted apart from its original claims and commitments on key issues such as the preservation of global security, stability, and peace. Referring to the nearly 730 million people living in poverty and rampant inequality in access to healthcare and education, Altun points out that international institutions have not only failed to prevent conflicts but to provide basic humanitarian assistance.

In the midst of an unraveling global order, deepening humanitarian crises, and rising violence, Türkiye, has insistently defended the importance of international cooperation and adopted a more proactive foreign policy driven by a conflict-resolution approach. In the third chapter, “Persistent Conflicts around the World,” Altun explains Türkiye’s perspective on the situation in Cyprus, the Syrian civil war, the future of Iraq, Iran’s nuclear ambitions, the Arab Spring, and the Libyan conflict. He illustrates Türkiye’s negotiation/intervention aimed at establishing stability in Cyprus with the Annan Plan, and the country’s efforts to ameliorate the challenging humanitarian and political conditions created by the U.S. invasion of Iraq. The author claims that Türkiye made the utmost efforts to prevent the Syrian civil war, ease the humanitarian tragedies there and help with the reconstruction activities required to stabilize Syria vis-à-vis terrorist groups. He emphasizes the importance of Türkiye’s efforts to address the Libyan crisis by preventing the country from re-entering a spiral of civil war and possibly regressing to dictatorial times.

Altun presents numerous cases, with examples, of Türkiye’s effective role in conflicts where other states have failed, claiming that, “unlike nations that seek status and power primarily through the implementation of a naked self-interest policy, Türkiye consistently approaches international conflicts through a vision of bringing about stability to further its national goals” (p. 132).

In the last chapter, “The Rise of Far-Right Nationalism, Populism, and Islamophobia,” the author touches on the incremental advance of the far-right toward the center in Europe and highlights the danger of antagonizing the Islamic World through Islamophobic governmental policies. Altun illuminates Türkiye’s responses to the increasing challenges posed by the rise of populism, far-right extremism, and Islamophobia. He concludes with the statement that the current international system has failures and shortcomings in addressing specific, modern challenges that differ from region to region, and argues that Türkiye is one of the prominent countries that offers constructive and humanitarian solutions with its advocacy to improve the efficiency
and relevance of an international order that, at present, favors only a few.

Altun subtly reflects on Türkiye’s foreign policy on civil wars, humanitarian tragedies, and the structural changes in its neighborhood over the last decades; an extraordinary revisionist work, the book ultimately invites readers to re-conceptualize Türkiye as a “stabilizing power.” The main strength of the book is that Türkiye is set as a case study with examples of its responses to the failures of the current international world order and its institutions. Throughout, Altun presents examples of Türkiye’s actual practices rather than theories. The book is deserving of praise for airing the voice of underdeveloped and developing countries in the global world order, and for seeking reform in the international order system and a “fairer” world. 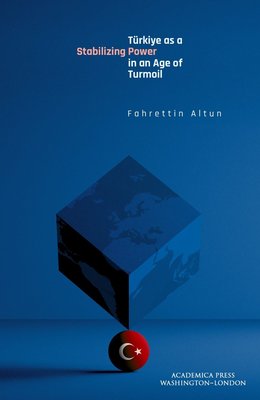 The Proliferation of Combat Drones in Civil and Interstate Conflicts: The Case of Türkiye and Azerbaijan