When Can Oil Economies Be Deemed Sustainable?

The book’s holistic approach to tackling the matter at hand benefits a wide audience, from students to policymakers. GCC nationals in favor of sustainable development and diversification in both the private sector and the government can benefit from this work to push for national development. The private sector in the GCC is significant in this discussion; chapters 10 and 11 help them understand the type of pressure and official expectations they might face. Simultaneously, the book conveys to policymakers that diversification of revenue sources can be achieved by tackling social challenges, systematically developing the private sector, and upskilling the national labor force. However, the book fails to clarify convincingly why sustainable development does not occur when a throw diagnosis exists.

In answering the titular question, “when can oil economies be deemed sustainable?” the editors, who are also contributors, explore the economies of oil-dependent countries and the question of economic sustainability. Contributors to the book include economists and energy specialists in established research centers and agencies worldwide. When Can Oil Economies Be Deemed Sustainable? presents a real predicament connected to energy and sustainability: whereas energy is an immediate cause of pollution and environmental degradation, oil revenues are only sufficient to sustain oil economies in the medium term. So with no alternative to oil, oil economies will continue production and pollution will continue to rise.

The volatility of the energy market confirms the notion that oil revenues are not sustainable. Interruptions in supply and demand are the leading causes of such volatility, and the ongoing Russia-Ukraine war is the latest factor driving the price increase. Therefore, oil-dependent countries seek to establish trade diversification and the diversification of revenue sources. A sizable part of the book explores the economic threats with which oil resource countries must cope, a phenomenon known as the ‘Dutch Disease.’ The book also addresses sustainability and diversification in Gulf countries, as imbalances, wars, and crises, whether in the Gulf or similar regions, affect both suppliers and recipients of energy resources.

When Can Oil Economies Be Deemed Sustainable? documents the 2018 Gulf Research Meeting discussions at Cambridge in fourteen chapters grouped into four main categories. The first part presents a holistic conversation about the sustainability of the Gulf oil economies. The second focuses on fiscal sustainability, i.e., the government’s responsibility to diversify revenue sources. The third addresses labor market reform by looking into labor market policies. The last part concerns climate action.

The first part of the book consists of 7 chapters. In chapters 1 and 2, the authors provide a holistic discussion of current trends and projections about the sustainability of oil economies in the Gulf. In the first chapter, the editors explain that what is sustainable today may not be sustainable in tomorrow’s economic cycle. Specific trends include worsening environmental degradation, socioeconomic inequalities, and the rise of poverty rates –as such, identifying what is unsustainable (p. 3) is a valuable contribution to the discussion.In chapter 2, Giacomo Luciani questions the notion of unsustainable Gulf economies and emphasizes the need for a competitive private sector, reform in the labor sector, and a real solution to income inequality. Ishaq Diwan explains in chapter 3 that the Saudis would be better off with a Norway-like model (p. 42). In chapter 4, Ali al-Saffar explores two scenarios; one in which oil demand continues steadily and another in which demand tapers off. His conclusion pushes for a more efficient energy sector in the Gulf ’s economic reform initiatives (p. 69). Chapter 5 argues that the transition toward low-carbon energy is improving. Chapter 6 compares the Gulf Cooperation Council (GCC) to the case of Norway, concluding that the GCC has diversified well, but has made less progress with regard to sustainable development. In chapter 7, Manal Shehabi redefines economic sustainability to account for the challenges of resource dependence.

The second part of the volume discusses trends in fiscal sustainability. For years, the discussion over sustainability has taken place in the Gulf and has emphasized the need to diversify the region’s economic activity and revenue base. However, the Gulf ’s diversification goals remain unmet. This part of the book investigates the fiscal reforms that have been implemented, and the policies necessary to diversify and adjust the labor market and the private sector’s status. Chapters 8 and 9 discuss oil and electricity prices post-2014, explaining that reforms in this era went deeper than previous ones. Nonetheless, more consideration regarding pressure on the private sector and the population is necessary (p. 241).

The third part addresses labor market policies and labor market reforms. In chapter 10, Monica Malik and Thirumalai Nagesh elaborate on the relevance of labor markets to fiscal capacity. Their discussion revolves around reducing public sector employment by changing the dynamics of the social contract. This would require government intervention to enact policy that supports such steps as an expansion of the private sector to create jobs for the youth population. Martin Hvidt deepens this discussion in chapter 11 by applying a value chain perspective to address diversification and job creation in Gulf oil-producing economies. This chain further clarifies where new jobs need to be created. Hvidt concludes that the creation of jobs in the high-value segment would better serve Gulf countries as this would eventually upskill the national labor force and reduce reliance on expatriate labor (p. 295).

The fourth part discusses the strategies of oil economies regarding climate action. In chapter 12, Jim Krane addresses environmental sustainability by analyzing Saudi Arabia’s response to global climate action. Kranes presents a descriptive analysis of three strategies oil-dependent states tend to adopt: ‘dig in,’ ‘join in’ and ‘throw in.’ The first aims to undermine global action on climate change, the second aims to put forth rational domestic energy policies, and the third seeks to frame climate change as the more expensive option. However, the author’s descriptive analysis fails to assess the threatening environmental consequences of climate change to Gulf countries. An assessment, which looks into the long run, would complement this work that focuses on analyzing nearer-term strategies. This is also based on the editor’s opinion and, might alter some of the already proposed conclusions. One might be the ‘throw-in’ strategy that seeks to frame mitigation efforts as more expensive than climate change damage.

The concluding section of this edited volume analyzes the sustainability of the GCC’s development. In chapter 13, Elbadawi and Makdisi review the experiments of six GCC countries. They observe the ability of those countries to avoid most of the consequences associated with the ‘resource curse,’ which is the failure of many resource-rich countries to benefit from their wealth to achieve sustainable development fully. While the authors observe a ‘current’ general developmental political equilibrium in the GCC countries, they fear the sustainability of this equilibrium (p. 344). Rightly so, this fear is in place today among the GCC countries, given the surrounding political instability.

In conclusion, the autonomous arguments of the authors naturally result in some divergent opinions and conclusions. In the final chapter, the volume’s editors explain that not all oil economies should be stereotyped as unsustainable. This confirms arguments found in the existing literature; for example, the United States is a sustainable, oil-producing country. The primary outcome of the book describes how the GCC economies are progressing toward diversification. In simple terms, those economies seek to reduce their reliance on oil as a percentage of their GDP and exports. Throughout the four parts of the book, its contributors investigate the economic factors that challenge the sustainability of oil production –these include fiscal imbalances, environmental pressures on GCC countries and social problems such as income inequalities. The book’s holistic approach to tackling the matter at hand benefits a wide audience, from students to policymakers. GCC nationals in favor of sustainable development and diversification in both the private sector and the government can benefit from this work to push for national development. The private sector in the GCC is significant in this discussion; chapters 10 and 11 help them understand the type of pressure and official expectations they might face. Simultaneously, the book conveys to policymakers that diversification of revenue sources can be achieved by tackling social challenges, systematically developing the private sector, and upskilling the national labor force. However, the book fails to clarify convincingly why sustainable development does not occur when a throw diagnosis exists. 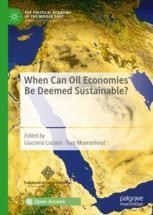