Notwithstanding the recent upsurge in micro-level individual intellectual histories of the late Ottoman period, Ahmet Şeyhun’s Competing Ideologies in the Late Ottoman Empire and Early Turkish Republic attempts to consider the broader scope of the intellectual trends of the era. It brings together the writings of the major intellectual figures of the period and highlights their major contributions to the intellectual milieu of the late 19th and early 20th centuries. Şeyhun’s work sheds light on the ideological processes into which the given intellectual thoughts were poured, especially the ideologies that had a significant impact on the formation of the Young Turks and the nascent Turkish Republic.

The historiographical trend in late Ottoman intellectual history since the 1980s has been based on biographies of individual persons and their specific contributions to intellectual trends.1 Şeyhun himself has written a monograph detailing the intellectual positioning of Said Halim Pasha. In the current book, he shifts the axis of this trend to concentrate on twelve different intellectuals’ writings and six major ideological movements, illustrating the multilevel structure of intellectual currents in play in the late Ottoman period.

In Competing Ideologies, Şeyhun first explores the conflicting nature of the ideologies trumpeted by “various intellectual and political figures who represented diverse political currents that competed in the political arena of the late Ottoman Empire” (p. 14). For Şeyhun, Tanzimat and the reform attempts of the 19th century had significant effects on the emergence of the “conflicting ideologies” of the times (pp. 2-3). The author stresses that it was not only a matter of competing but of collaborating; while the Islamist writers and their Westernist counterparts did engage in ideological conflict, the liberals, Young Ottomans, and Islamists in many cases influenced each other positively. Şeyhun also mentions interactions through which Ottoman intellectuals were influenced by European intellectuals. Remarking upon these points of intersection and interaction could be considered a strength of the book as a whole, as Seyhun presents a detailed yet comprehensible background of the late Ottoman, and Early Republican periods.

The book’s structure follows the model of the individual biographies mentioned above. At the beginning of each chapter, Şeyhun provides a brief biography of an intellectual; the remainder of the chapter concentrates on specific selections from their writings. The introductory part of the book presents a brief overview of each intellectual current addressed in the book, along with its well-known individual personalities. Six intellectual currents, namely the Young Ottomans, the Turkists the Westernists, the Liberals, the Positivists and the Islamists are taken into consideration with examples from selected writings. Part I focuses on Young Ottoman thinkers with a specific focus on Namık Kemal and Tunuslu Hayreddin Pasha. Part II concentrates the famous Turkist intellectuals Ziya Gökalp, Yusuf Akçura and Ahmet Ağaoğlu. The Westernist intellectuals attract Part III’s attention, with selections from the writings of Celal Nuri İleri and Abdullah Cevdet. To exemplify the liberals, the ideas of the most famous intellectual, Prince Sabahaddin, are explored in Part IV. Ahmet Rıza Bey and Lütfi Fikri are considered positivist intellectuals in Part V. Lastly, aligning with Şeyhun’s original area of specialization, Islamist intellectuals, including Said Halim Pasha and Ahmed Naim Baban, are considered in Part VI.

Although Seyhun sets out to compare how the given intellectuals’ ideas intersect with and differ from those of their counterparts, it may mislead readers in its execution. The author makes very few attempts to answer the fundamental questions posed in the introduction or to flesh out his arguments when he does offer a reflection. In other words, although the book first gives the early impression that it will open a fundamental discussion regarding late Ottoman intellectual history, specifically the nature of its competing intellectual currents, the author deliberately avoids making further remarks in the remainder of the book. It must be stressed that the main deficiency of the book stems from this lack. This is unfortunate, as it would have been feasible to discuss late Ottoman intellectual trends, at least by adding a conclusion, especially on the scope and extent to which these trends compete, by providing examples from the twelve intellectual’s writings. Indeed, given the selections that were already included, a comprehensive analysis of the intellectual dispositions of the different intellectuals would have made sense. Şeyhun could have successfully maintained a discussion as to whether the so-called modern ideologies could be approached as synchronously interactive with each other or not. Although the author seems to adumbrate these matters in the very beginning of the book, he ultimately avoids taking the inquiry further. There is not even a conclusion part discussing the main findings derived from analyzing the conceptual outcomes of the thought trajectories. It would have been better if Şeyhun provided further conceptual discussions regarding the materials. However, he skillfully pointed out that this book serves “the field of Islamic and Ottoman studies in particular by making available important primary sources to scholars and students who are unable to read the Ottoman and Turkish languages” (p. 14). In this respect, Competing Ideologies in the Late Ottoman Empire and Early Turkish Republic represents a highly valuable contribution to the literature. 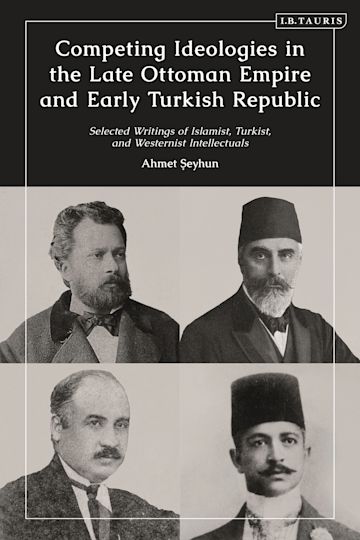