Since the fall of the Soviet Union, the U.S. has confronted a very broad spectrum of problems. The return of great power rivalries with a rising China, a resurgent Russia, and a self-reliant European Union have changed the international environment. Furthermore, nuclear weapons, energy dependence, and regional problems in the Middle East and Africa are now viewed differently, and America has not been a bystander in this changing environment.

Since the fall of the Soviet Union, the U.S. has confronted a very broad spectrum of problems. The return of great power rivalries with a rising China, a resurgent Russia, and a self-reliant European Union have changed the international environment. Furthermore, nuclear weapons, energy dependence, and regional problems in the Middle East and Africa are now viewed differently, and America has not been a bystander in this changing environment. Within this context, Cycles in US Foreign Policy Since the Cold War, by Thomas H. Henriksen, aims at analyzing post-Cold War American foreign policy by focusing on how and why American responses fluctuate toward overseas challenges. The main argumentation is based on the proposition that American foreign policy cycles have alternated between engagement and disengagement in global affairs. By concentrating on the post-1989 era, Henriksen analyzes the decisions of four American presidents (George H. W. Bush, Bill Clinton, George W. Bush, and Barack Obama) and attempts to unravel the complexities of U.S. politics with special attention given to the formulation of U.S. foreign policy. Henriksen also aspires to make the study of cycles an enlightening factor in appreciating the past and in offering a forecast for the future.

The author’s detailed narration is composed of a long introduction, four chapters, and a brief conclusion. In the introduction, the author explains his hypothesis, which is based on the observation that post-Cold War U.S. foreign policy has swung between the poles of active international involvement and disengagement. Accordingly, cycles of international engagement coincide with the use of direct military power or diplomatic pressure against other nations or entities, while cycles of international disengagement reflect a strong domestic orientation and dissociation from risky overseas problems. Although Henriksen concentrates on the post-1989 era, he emphasizes that cyclical swings between international engagement and disengagement have appeared since the founding of the Republic; as the United States rose to be a world power, the pendulum phenomenon materialized most dramatically in the 20th century.

The first chapter deals with the George H. W. Bush era. It begins by pinpointing the role of the U.S. which emerged as the sole remaining superpower after the Soviet Union’s demise. According to the author, America’s superpower status practically guaranteed that Washington had to pay attention to almost every trouble spot anywhere on the planet. Although Bush had served for eight years as Reagan’s vice president, he differed from his predecessor once in the Oval Office. President Bush dispatched over half-a-million U.S. troops to repulse Saddam Hussein’s invasion of Kuwait in 1990. Furthermore, he enlarged the basing and positioning of arms in the Gulf area and set up no-fly zones over large swaths of territory in north and south Iraq. Bush also played an outsized role in overseeing the Soviet Union’s peaceful collapse, removing the Red Army from Eastern Europe, and unifying East and West Germany. The Bush Administration militarily deposed the narcotics-peddling dictator in Panama. It invaded the Central American country, ousted Manual Noriega, installed a legitimately elected president in the Panama Canal country, and departed without becoming bogged down in a hostile or prolonged occupation. As a result, the Bush presidency marked a decidedly activist international phase in the cycle of American engagement and disengagement. But before Bush left the White House, his administration’s overseas actions anticipated those of his successor as President Bush started to pull back from an exuberant internationalism.

The author dedicates the second chapter to William Jefferson Clinton. Henriksen focuses on Clinton’s New World Order philosophy and provides certain examples of Clinton’s non-interventionist policies in the Rwanda, Haiti, North Korea, and the Balkans. As he demonstrates, Clinton’s accession to power furthered America’s pendulum swing toward the non-interventionist pole. At first, Clinton turned to domestic issues, which Henriksen identifies as where his heart and expertise lay. But Clinton’s predisposition to work almost exclusively on domestic issues momentarily came to grief in the Black Hawk Down incident in Somalia. Henriksen argues that the Somali misadventure profoundly influenced American policy toward other trouble spots such as Haiti, Rwanda, and Bosnia. In his last months in office, Clinton reversed himself on a tough policy for the United Nations (UN) weapons inspections in Iraq, backed away from enforcing air traffic restrictions into Baghdad, anemically responded to the twin 1998 terrorist attacks on the American embassies in Tanzania and Kenya, and shrugged at a counterstrike for the skiff-bombing of the USS Cole in Aden, Yemen. By the time Clinton left office, the U.S. looked to be in full-bore retrenchment mode.

In the third chapter, the author directs his attention to the George W. Bush era. As Henriksen demonstrates, Bush’s foreign policy veered sharply from the disengagement and hesitancy of his predecessor to a forceful interventionism that surpassed other post-Cold War presidencies. In particular, the 9/11 attacks swung the U.S. foreign policy cycle into active engagement. According to Henriksen, 9/11 revolutionized Bush’s thinking toward America’s enemies in a way that is hard to imagine of Clinton or Obama in similar circumstances. Large-scale military incursions into Afghanistan and Iraq were followed by ambitious nation-building and democracy-promotion exertions. Under American auspices, counter-terrorism operations expanded into the Philippines, Somalia, Pakistan, and the Horn of Africa. President Bush’s first term also witnessed the formation of a global anti-terrorism coalition, a close re-alignment with Pakistan, and diplomatic exertions to buttress democracy in the color revolutions of Ukraine, Georgia, and Kyrgyzstan. But elsewhere, the White House rotated from international engagement to retrenchment. Similar to the other presidencies, the foreign policy of the Bush White House altered course from its original trajectory in the last stretch in office.

In the last chapter, the author analyzes the Obama Administration. Major developments such as the shift in American policy, the pullback from Iraq and Afghanistan, the reset policy with Russia, the Arap Spring, the Syrian war, and the pivot to Asia are all given close scrutiny. In this regard, America’s 44th president scaled back American leadership while not completely abandoning all of America’s participation in international ventures. During the last year of his presidency, Obama incrementally nudged the engagement–disengagement pendulum toward military involvement. According to the author, by deploying teams of special forces, advisers, and aircrews to fight ISIS, he rolled back some of ISIS’ gains, enough to keep the lid on its advances in Iraq and Syria, but far short of defeating it.

All in all, each presidential administration strove to be unlike its predecessor, which played a major part in the cyclic engagement-disengagement pendulum oscillations. As such, they adapted, hedged on campaign promises, and shaped their policies for polls, reelection, or historical legacies. They also altered their coming-into-office approaches near the end of their terms. When their new posture contradicted, modified, or even broke with their initial policies upon stepping into the Oval Office, they not only justified the change but also anticipated their successor’s international stance.

What remains unknown at this moment is whether the framework introduced by Henriksen can be valid or possible for the Trump Administration, under which the U.S. no longer has the wisdom or capacity to shape events and prevent others from doing what they please, and global confidence in the U.S. leadership has been falling.

In conclusion, this book offers coherent and focused accounts of U.S. foreign policy and can be utilized to present a chronological flow of events and to contribute new approaches to the discussion of U.S. foreign policy in the post-Cold War era. In this regard, Cycles in US Foreign Policy Since the Cold War is a significant contribution to the literature and an essential reference for policymakers and academics interested in U.S. foreign policy and international relations. All things considered, anyone who is interested in U.S. policies may find this book interesting. 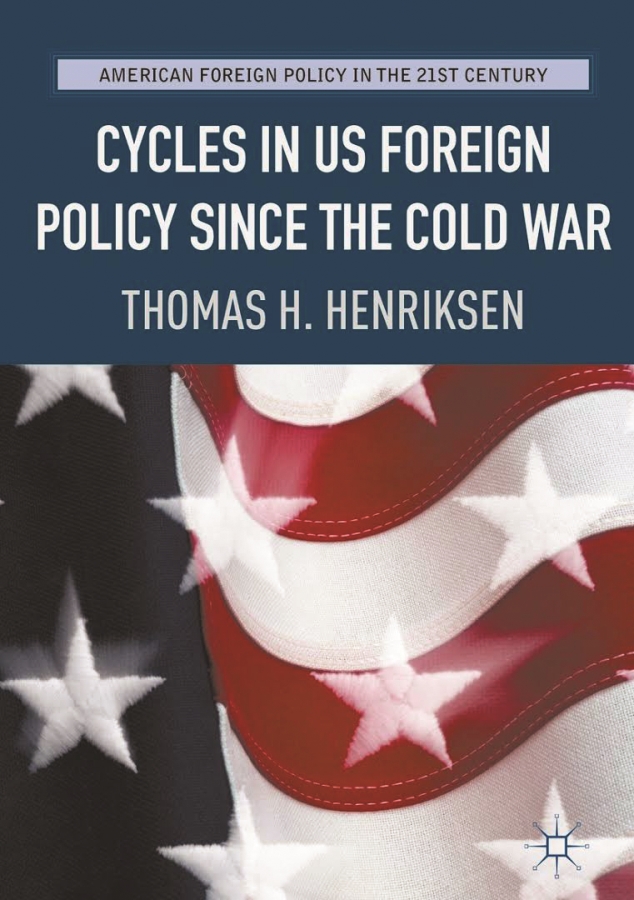