One might be forgiven for presuming that a new book called The Contradictions of Israeli Citizenship would present innovative insights about the place of Palestinian Israelis—and their stateless West Bank-dwelling brethren—in modern Israeli society.

One might be forgiven for presuming that a new book called The Contradictions of Israeli Citizenship would present innovative insights about the place of Palestinian Israelis—and their stateless West Bank-dwelling brethren—in modern Israeli society. Given the long paper trail left by past scholars seeking to understand the practical and philosophical dilemmas of a codified ethno-religious identity existing alongside a liberal democratic ethos, one might reasonably anticipate new conceptual frameworks and a fresh evaluation of a long-examined problem.
The volume’s editors, Guy Ben-Porat of Ben-Gurion University and Bryan Turner of the City University of New York, seem keenly aware of these expectations. Two essays that focus heavily on the Palestinian Israeli segment of society appear back to back, near the end of the volume, as if the book were constructed to whet readers’ appetites for the novel conclusions contained within. Before turning to the central question, Ben-Porat and Turner present essays on the Israeli republican equation, Ashkenazi-Mizrahi dynamics, Haredi (ultra-Orthodox) Jews’ interactions with the state, and civic engagement by immigrants from the former Soviet Union.
Unfortunately, the volume faces two major problems. First, the quality and relevance of the essays is uneven. Several fail to either pose or answer broader questions about Israeli citizenship. Second, the essays on the Palestinian Israelis address familiar questions with unremarkable conclusions.
The volume is not without thoughtful essays that illuminate aspects of Israeli citizenship. Yagil Levy addresses the post-1973 challenges to the traditional military service-for-societal dominance republican equation of the state’s early years. The reduced benefits and increased risks of military service for Ashkenazi males gave rise to Peace Now and Yesh G’vul—an organization of reserve soldiers selectively refusing to serve. Levy also deftly presents the ambivalent responses of non-dominant identity groups: advocating—and seizing opportunities for—greater inclusion while also working to change the terms for what brings status and prestige in society.
The essay on Haredi conceptions of citizenship is likewise strong. The dominant discourse on the Haredim debates the ramifications of their demand for state resources and minimal contributions to the Israeli economy. Here, the authors investigate Haredi-led organizations that bring nuances to the conversation about the nature of Haredi citizenship. They focus on ZAKA, which applies the Jewish practices of honoring the dead to terror victims, and Yad Sarah, which provides aid and services to needy families, as persuasive counterarguments to Haredi nonparticipation in civil society.
The volume’s treatment of Mizrahi Israelis’ efforts to counteract systemic socio-economic and cultural subordination falls short of expectations. The discussion does not progress beyond observing the relationship between identity politics and citizenship. These essays fail to address socio-economic and cultural subordination as a historical issue, paralleling the experiences of Mizrahi and Ethiopian immigrants. The volume fails to address ethnic fragmentation as a possible direct result of Israeli policies and economic liberalization—substantial editorial failures both.

This is all the preamble. In his own chapter “Inward turns,” Ben-Porat examines the assassination of Yitzhak Rabin as the catalyst for a Jewish Israeli pullback from the peace process and a focus on internal unity. Ben-Porat presents this as a devastating turn for Palestinian Israelis. The dominant discourse of internal unity, by which Israeli leaders mean Jewish unity, necessarily excludes Israel’s nonJewish citizens. Ben-Porat traces Rabin’s assassination to Benjamin Netanyahu’s 1996 “Netanyahu is good for the Jews” campaign slogan to Ariel Sharon aspiration for a national—i.e. Jewish—unity government. What new ground does this cover? That the period from Rabin’s assassination through the Second Intifada is among Israel’s bleaker periods, precisely because of the retrenchment on both sides, is well-known.
On the struggles of Palestinians in integrating into Israeli society, Ben Porat writes they were “held back not only by the Jewish majority’s exclusion but also by the Palestinian minority’s difficulty integrating into a state that holds Palestinians in the occupied territories under military rule.” No doubt. But this volume fails to meet a well-defined problem with the bold new insight required.

Ben-Porat’s recapitulation of the state of affairs suggests he may be swiftly losing hope that reconciliation of the tensions within Israeli citizenship is possible. On the Israeli left-wing policy makers’ fixation on the demographic issue, Ben-Porat argues that “it alienated the Palestinian citizen minority who came to realize that the peace process holds limited promise for a constructive discussion of Israel’s citizenship regime.” The point is at once obvious and overstated. To grapple with Israel as an idea is by definition to struggle with the competing values of a Jewish state and a democratic society. Yet, to suggest the impossibility of their tense coexistence seems unfounded. In a volume investigating the seeming contradictions within Israeli citizenship, Ben-Porat presumes that which he seeks to prove.

The piece on Arab civil society in Israel fares slightly better. Amal Jamal’s distinction between the rise of civil organizations and the democratizing force of civil society demands attention. He contends that civil associations may facilitate development and empowerment without managing to democratize the state. Were Jamal to investigate those claims in depth, his essay would have exceptional value. Though the alienation of Palestinian Israelis from civil society is implicitly understood, a detailed understanding of this reality’s implications would have been welcome. Yet, Jamal simply names discriminatory practices, in allocation of social services especially, of successive Israeli governments. All of Jamal’s points are true, all demonstrate anti-democratic tendencies, and all are well known. Jamal’s willingness to drift too quickly from his initial claims is a lost opportunity.

The final essay, Yoav Peled’s eulogy for liberal nationalism in Israel, epitomizes the volume’s shortage of new ideas. Peled cites numerous abuses of democracy perpetrated by Israeli governments. Little substantive comment is added. Peled closes with the tragic Citizenship and Entry Law, which prevents citizens of Israel married to residents of the Occupied Territories from unifying their families. Peled correctly notes that the law is the first explicit legal distinction between Israel’s Jewish and Palestinian citizens. No further discussion follows. For Peled, the Citizenship and Entry Law is not a tragic and sobering turn by Israel away from liberal values: it is confirmation that the concept has ceased to exist.

Upon reflection, the volume’s title makes more sense. “Contradiction”, not “complexity.” Reconciling the competing values of an ethno-religious identity and liberalism is deemed impossible. Perhaps, then, it should not be surprising that what may pose challenging questions for some, poses lamentable conclusions for Ben-Porat and Turner. 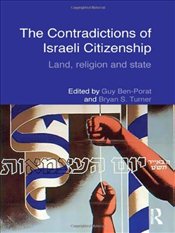