Rich Russians: From Oligarchs to Bourgeoisie

The book appeals to anyone interested to learn about the rapid evolution of this new social class in Russia. The readers that value this unique social phenomenon would definitely find the book worthy of their attention.

The collapse of the Union of Soviet Socialist Republics (USSR) has become a critical junction for numerous different movements within Russia and out of it. Meanwhile, in the conditions of a rapid increase of social dissimilarity and poverty, individuals have emerged in this post-communistic country to form a new Russian upper class. In Rich Russians: From Oligarchs to Bourgeoisie, researcher, and sociologist Elisabeth Schimpfössl examines the accelerated process of ‘bourgeoisification’ in Russia. In other words, the author relies on the factors that contribute to the formation of Russia’s new social class as the bourgeoisie. The book is based on a social study conducted by Schimpfössl in order to research the role of the newly rich people of post-Soviet Russia. With this aim, the author interviewed more than 80 rich and influential individuals with different beliefs and political views.

Starting from the end of the 1980s, four main events triggered the appearance of rich people in Russia: perestroika, privatization, the presidency of Putin, and the booming petrol prices at the beginning of the 21st century. Perestroika and privatization are two closely following events that turned some people wealthy literally overnight. Rich Russians who had accumulated their wealth sometime earlier used the opportunity to increase their assets during privatization. Bankers’ unregulated manipulations of the governmental assets in 1995 led to the next wave of newly made oligarchs. With the ensuing financial default in 1998 and Putin’s presidency, the state managed to deal with the old oligarchs and regain some control over its assets. At the same time, new fast-rich individuals appeared; this time they were from the close circle of the President. If in the 1990s during Yeltsin’s Presidency the new-rich oligarchs were trying closely to engage in politics in order to boost their own interests and control their rivals, Putin’s period has brought changes by taking the oligarchs aside of political affairs. Thus, all those events happening in the Russian arena were a critical junction for those who sided with the right people at the right place to use the chance and, as a result, became very rich within a short period of time. Alongside these trends, the image of rich people within Russian society was changing rapidly: in the 1990s they were addressed as novye russkie (new rich)–omnivorous individuals with an extremely ostentatious lifestyle (p. 3). The beginning of the 21st century brought the era of oligarchs, people with a more modest image, relegating the ‘new riches’ to be the main characters in anecdotes.

As mentioned above, Schimpfössl’s main goal in Rich Russians is to identify the factors that shaped independent, rich individuals into one single social class. Therefore, in the process of the writer’s numerous interviews, she discovers and describes the main criteria that rich individuals, especially entrepreneurs, were the most eager to show off. For instance, many oligarchs by a certain time began to get interested in their ancestry. They paid specific attention to the search for blue blood in their genealogy, as such discoveries. It helped them maintain their status among their own kind. They expressed the belief that intelligence and manners depend on genetics and can be passed down from ancestors. Therefore, they used this information as a way to justify their wealth, not as simple luck or a chance of the moment but deriving from ability gifted by genetics.

In general, Schimpfössl emphasizes that the majority of Russian oligarchs come from well-educated but not wealthy Soviet families, which used to belong to the elite of the society. It led them to have a good educational background, mainly in the fields of economics and engineering. Thus, their education and relation to certain social groups became their capital for the further jump. But not only background and lifestyle characterize the social status of the elite, but also a certain lifestyle and cultural-social position. The last includes mainly philanthropy based on the fields of art, children’s education, religion, and charity foundations. The author pays special attention to philanthropy since Russia’s wealthy class took part in the reemerging charity of the 90s after the period of its non-existence during Soviet time. Therefore, Schimpfössl finds, philanthropy helps to evolve class-consciousness and bind these people together.

The author highlights the era of the second-generation Russian elite taking place at the present moment. But in comparison with the first generation, the second generation is not concerned about the goal of money-making but in developing their own interests apart from business life. This is the factor that is supposed to help the rich class to reinforce their bourgeois identities in the future.

As the title of the book indicates, Schimpfössl’s research aims to get a clear image of the new Russian bourgeois class formed by the emergence of the oligarchs. It should be mentioned that Schimpfössl uses the term ‘bourgeoisie’ in the sense of la classe dominante (p. 10) developed by Pierre Bourdieu to refer to a social class based not only on economic terms but cultural and social ones. Thus, the writer assumes that “the moneyed class”(p. 10) of Russia is on the point of acquiring bourgeois characteristics.

Schimpfössl contributes by drawing clear pictures of people who are the children of ‘Soviet intelligentsia’ that later became money-making businessmen. The next generation is less “money-focused” (p. 173) and prefer to cherish personal interests over business activities, adding up to further formation of the Russian bourgeois identity. Thus, the author predicts that the self-awareness of second and third generations combined with the wealth of their families will only strengthen the class in the future.

The book appeals to anyone interested to learn about the rapid evolution of this new social class in Russia. The readers that value this unique social phenomenon would definitely find the book worthy of their attention. 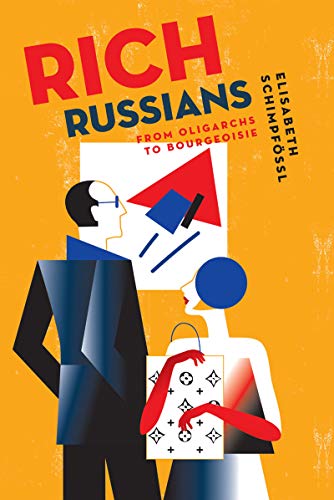