Cathie Carmichael’s book integrated the political, economic and cultural history of Bosnia and Herzegovina (BiH). Throughout a rigorous study of primary and secondary sources, the book offers an objective engagement, covering the historical developments of BiH. Carmichael avoided a narrow approach towards the history of BiH by not focusing only on the events of the 1990’s – but rather offered a historical overview of the country (from the Ottoman Empire until the recent events).

Cathie Carmichael’s book integrated the political, economic and cultural history of Bosnia and Herzegovina (BiH). Throughout a rigorous study of primary and secondary sources, the book offers an objective engagement, covering the historical developments of BiH. Carmichael avoided a narrow approach towards the history of BiH by not focusing only on the events of the 1990’s – but rather offered a historical overview of the country (from the Ottoman Empire until the recent events). In other words, the book does not examine only the emergence of the narratives that were critical for the nation-building in BiH, but rather the country’s history itself. However, Carmichael failed to devote a whole chapter in the book to the ‘medieval Bosnia’ which is an important historical epoch to fully understand the country’s complex heritage. Nevertheless, Carmichael did cover the medieval Bosnia partially in the introductory part of the book. The ethnically divided modern BiH cannot be understood without considering the medieval Bosnian Church and Bogomilism which is observed as one indigenous Bosnian phenomenon that lies at the heart of the Bosniak nationalism.

This book consists of seven chapters including the introduction and conclusion. For those who are not familiar with the history of BiH, it would be advisable to pay attention to the book’s “Preface” before starting to read the chapters. The author offers there a first-hand experience of the Bosnian spirit (Bosanski duh) and describes spiritual difference of BiH in 1989 and 2011. Additionally, Carmichael shares her view about the post-Bosnian war society which was exposed through means of genocide, mass deportation etc.

In the introduction, Carmichael overviews the natural heritage and beauty of BiH, the cultural and religious wealth, the great novelists, the poetry which exists since the Neolithic era (p. 10) and shortly reflects on the medieval Bosnia (pp. 12-15). The second chapter “Bosnia, Herzegovina and the Ottoman Empire (1463-1912)” describes the Eastern elements of the Bosnian history. Carmichael says “Bosnia had been largely Catholic land with autonomous traditions and Hum largely Orthodox [referring to the pre-Ottoman Bosnia]” (p. 21). The author failed here to describe the Bosnian Church and Bogomilism of the pre-Ottoman BiH. The Bosnian Church has been partially covered in the introduction, but not sufficiently (p. 15). The Bosnian Church was heretical from the point of view of the Roman Catholic Church and the Orthodox Church, and her believers are named differently by different sources such as: patarenes, bogomils, baboons, manicheans etc. Many of them converted to Islam. Additionally, Carmichael described the Ottoman Bosnia through the millet system, devsirme, bedestan, calligraphy, poetry and significant Ottoman infrastructure. On the other side, Carmichael focuses on the late Ottoman legacy in Bosnia and the failure of the Ottomans. The third chapter “Rebellion, War and the Hapsburgs (1875-1918)” describes the very late Ottoman rule in Bosnia and the Austro-Hungarian rule through the ‘Eastern Question.’ This chapter is crucially important to understand the position of Bosnian Muslims during the post-Ottoman period and their life in a Christian Empire. This opened many questions: Should the Muslims accept or resist the new Empire? Should the Muslims cooperate with the new Empire? Should the Muslims migrate to the remaining parts of the Ottoman Empire? etc. Carmichael mentions that in 1875, “the Ottomans began to lose control after the rebellion in Herzegovina, which was linked to spread of nationalist aspirations in neighboring Montenegro and Serbia” (p. 38). This elaborates a twofold explanation: one is that the nationalist rising in the late Ottoman Bosnia was aspired by outside factors, and the other one is that the Ottomans faced problems in many parts of BiH before the Empire eventually lost control over the country. In 1878 the Treaty of Berlin allowed the Habsburg monarchy to administer Bosnia (p. 39). The authorities of the Bosnian Muslims supported the new Empire. The Sarajevo Mufti, Mustafa Hilmi Hadžiomerović, encouraged cooperation with the new authorities and discouraged migration of Bosnian Muslims to İstanbul (p. 40). In addition, Carmichael describes the infrastructure improvements in Bosnia during the Habsburg period (p. 47).

In the next chapter “Royalist Yugoslavia, the Independent State of Croatia and the Second World War (1918-1945)” Carmichael describes the political developments in Bosnia in the post-Habsburg period. In 1918, the Allies accepted the right of the enemies of the Habsburgs, the Serbian Karadjordjević Dynasty, to create a new state in the Balkans (p. 60). Carmichael explains the will of South Slav intellectuals to create a union of people who share the same language. The union was named as the Kingdom of Serbs, Croats and Slovenes (SHS); and the creation of the Kingdom included BiH but the country’s name was excluded from the Kingdom’s name. Carmichael never systematically developed an idea of why the Kingdom’s name discriminated over BiH. The Kingdom of SHS was renamed as the Kingdom of Yugoslavia on October 3, 1929. Carmichael mentions that the Kingdom imposed a policy of redistributing the Bosnian land which left many Muslim families in poverty. Unlike under the Habsburg Empire, the Bosnian Muslims had to deal with the weight of historical anti-Islamic sentiments. The Bosnian Muslims were often called Turci (Turks) because they converted to Islam during the Ottoman Empire (pp. 60-68). The Kingdom lasted until April 6, 1941 when Axis powers invaded Yugoslavia. Carmichael explains that following the Axis occupation, the Independent State of Croatia (Nezavisna Država Hrvatska) was established in parts of occupied Yugoslavia. BiH was considered as a part of the Independent State of Croatia. Interestingly, the Bosnian Muslims enjoyed better rights during the fascist Independent State of Croatia than during the Royal Yugoslavia. Carmichael describes that the Bosnian Muslims were seen in the Independent State of Croatia as ‘pure Croatian blood’ (echoing beliefs held by Stračević) (p. 76). The Bosnian Muslims were called ‘cvijećem hrvatskog naroda’ (the flowers of Croatian people). In the fifth chapter “Bosnia and the Communist Experiment” Carmichael explains a new epoch for BiH – now being a republic with equal rights in the new Communist Yugoslavia (p. 95). Whereas the Habsburgs had ruled without the widespread consent of the Orthodox community, the new republic of BiH within Yugoslavia heavily dependent on the institutional loyalty and participation of former Serb Partisans (p. 101). Importantly, the Yugoslav People’s Army (JNA) became the largest per capita army in Cold War Europe (p. 108). The Serbs and Croats played the major position in the JNA and the Bosnian Muslims were minoritized. Nevertheless, BiH became one of the most solid pillars of the Communist regime in Yugoslavia. Carmichael says that Tito’s friendship with Gamal Abdel Nasser gave Bosnian Muslims a greater sense of cultural importance in Yugoslavia (p. 115). However, Carmichael never systematically described this point. The Bosnian Muslims (Bosniaks) did not enjoy a cultural importance in Yugoslavia because often the Madrasas (Islamic high schools) were closed and banned from working. The waqfs (mortmain property) were seized and impounded. Additionally, the movement Mladi Muslimani (Young Muslims) was suppressed by the Communist regime and many members were imprisoned or executed. The communist injustice over the Muslim population in Bosnia and other Yugoslav republics was not systematically developed in the book. However, Carmichael says that “the continual democratization of fascism under Tito had meant that most Yugoslavs would not even permit themselves the right to think about the shape of the republics differently” (p. 131).

In the sixth chapter “Bosnia Independence, War and Genocide” Carmichael describes the failure of Yugoslavia, the independence of BiH and the war crimes committed during the Bosnian war 1992-1995. In 1991, Slovenia, Croatia and Macedonia declared their independence from Yugoslavia. Following the disintegration of Yugoslavia, the majority of people in BiH voted in favor for independence in a 1992 referendum. Most of the Bosnian Serbs boycotted the referendum and independence. War soon emerged in BiH after the referendum, and the ethnic nationalists in the country tried to take control of territories they claimed as their own. Ethnic cleansing, systematic raping and genocide in some parts of BiH were committed between 1992-1995 which led to hundreds of thousands of dead and more than two million displaced people (pp. 135-138, 151-157). Carmichael also explains the destruction of the environment and the cultural artefacts. For instance, the Banja Luka mosque Ferhat Pasha (built in 1579) was listed as a BiH cultural heritage site in 1950 and was subsequently protected by United Nations Educational, Scientific and Cultural Organization (UNESCO) until its destruction in 1993 by the Bosnian Serb Army (p. 150). Additionally, the author reflects on the peace plans for BiH such as the Vance-Owen Plan, the Dayton Peace Agreement (DPA) etc., as well as the involvement of the International Community in cease-fire and peacekeeping (pp. 164-170). In the “Conclusion: ‘Unmixing’ Bosnia and Herzegovina” Carmichael discusses the impact of the last Bosnian war 1992-1995 on today’s BiH. The distrust among the ethnic groups (Bosniaks, Bosnian Serb and Bosnian Croats) still exists and influences the policy making in the country. The author says that “Serbs revived old fascist plans for ethnic cleansing from the Second World War during which Bosnian Muslims had been attacked by Serb nationalists” (p. 171). On the other hand, the Bosnian war provoked numerous questions to the international community and the regional politics in the Balkans, including the role of sexual crimes in war, obfuscation and genocide denial among extreme nationalists. Nevertheless, the nationalism and the need for nationalism proved itself to be a part of the political and common culture of the ethnic groups (Bosniaks, Bosnia Croats and Bosnian Serbs) in BiH. The Bosniak nationalism provided itself to be the most painless nationalism which seeks to retain the national sovereignty and integrity of the country; while the most dangerous nationalism is imposed by the Bosnian Serbs which seeks to provoke the International Community by advocating secessionist ideas. Unfortunately, this slows the reforms in BiH which are required for the EU and NATO membership.

In conclusion, this book is not primary for academicians, professionals and students within the field of history and the Balkan studies; but rather focuses on readers who currently know little about the history of BiH. The book explores how BiH changed over many centuries, and focuses on the dynamics of the country’s past. The only drawback of the book is that Carmichael did not sufficiently focus on the medieval Bosnia which is an important element for the Bosnian history and the identification of the Bosniaks (Bosnian Muslims). BiH has a complex cultural-religious civilization and heritage interweaving elements from the Mediterranean, Byzantine, Ottoman and Central European cultures. 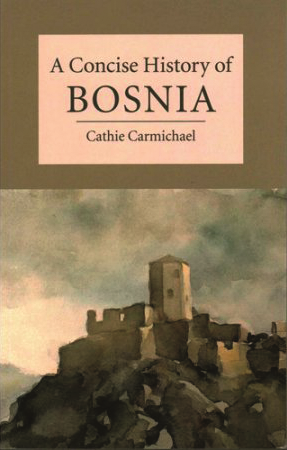