Trust in the European Union in Challenging Times offers an interdisciplinary approach to trust in the European Union (EU) derived from political science, law and economics. It addresses a timely trust-related issue: the authors state that the book is published at a time when the EU is “facing many serious crises” (p. 2). Some of the most significant events in the EU since the fall of the Berlin Wall –Brexit, the refugee and migrant crises, terrorism, debt crises, unemployment, tumultuous elections, the rise of rightists– stress the unity of the EU. Some of these crises are not just political but constitutional. Not only does this edited volume provide an analytic account of trust in the EU, it also considers the consequences for the EU –both at the national and the Union level– when trust is lacking. The book is a great one-stop-shop book for students of EU studies, political science and international relations. It is also useful for policy makers eager to understand the consequences of the current unforeseen problematic situation – the European trust crisis. The main contribution of this book is to show the importance of trust and the consequences of its absence at the EU level as well as its role in tackling the challenges and problems the Union is facing.

This edited volume includes ten scholarly works that examine the ‘principle of trust’ from different points of view – political institutions, enlargement, migration, income inequality, monetary policy convergence, the Eurozone debt crises, legal convergence in criminal and civil law, digitalization and so on. Such an interdisciplinary approach can help readers gain a comprehensive insight into the trust crises in the EU. It also helps readers realize that the ‘trust crises’ in the EU are not only the result of the uncontrolled flow of refugees and migrants –as is often presented by the media– but rather of a number of intertwined issues. The advantage of this volume is its compelling, in-depth, critical analysis of the trust-related issues from the cross-EU-country perspective. Trust in the European Union in Challenging Times is theory-driven and rich in details; the most systematic analysis to date on trust in the EU.

Trust among EU member states is a key element allowing the development and growth of the EU. The emergence of EU integration in the 1950s is the standpoint of trust among the member states. Trust in the EU and among the member states took a long time to build. It was built by common sense, solidarity and institutionally – through competence transfers from the national level to the EU. However, the level of trust in the EU has gradually declined and this decline is politically problematized because ‘Trust arrives walking and departs riding.’ Trust in and support for the Union have become a major political challenge that requires immediate, concerted counter-efforts. EU leaders must find solutions to the difficulties they are facing; trust among them is central to the decision-making process, while the decision-making process is central for further trust development. There are no quick fixes for the present ‘trust crises’ and the only way to rebuild trust among the member states and in the EU institutions is to earn it. Importantly, a society in which people trust each other functions better –economically, politically and socially– than a society in which there is no trust among people.

This edited volume shows that the political trust in the EU project started to erode by comparing Eurobarometer survey data across member states; it also looks into issues regarding trust differences per member state. Therefore, the book offers a well-researched diagnosis of the EU ‘trust crisis’ by analyzing at what level of government the crisis was created. For instance, the authors examine citizen evaluations of national governments, as well as citizens’ preference towards the EU as a political system. In addition, the authors focus on evaluations of the functioning of democracy in the EU, and measure direct trust in the various institutions of the EU. A positive image of the EU as a political system can be found in wealthy countries, such as Luxembourg and the Nordic countries, but also in more economically challenged member states such as Romania (p. 77). In addition, a positive opinion toward the European Parliament can be found in countries with comparatively stable economies and well-functioning political institutions, such as the Nordic countries (p. 79). In the book, readers can find various models for explaining the variation in the level of trust per member state. Citizens’ political trust can be based on rational as well as emotional factors. The explanations of the variations in attitude toward the EU are broadly divided into two groups: (i) explanations based on self-interest and (ii) explanations focusing on cultural factors, mainly identity. The authors found that the popular ‘trust crises’ are most negatively affected by economic and other crises and the EU’s perceived inability to handle them. The sense of cohesion between countries is questioned and raised as an argument in discussions about the value of membership in the EU. The increased public opinion support and election successes of political parties with Eurosceptic agendas are presented in many member states. The populist-extremist right-wing parties have gathered increased strength, and the growing support for the populist right-wing parties is a clear risk for the EU core values. The authors suggest that member states that obstruct the EU decisions and/or core values simply should not be allowed to receive benefits, subsidies and contributions from the regional and/or other funds.

In conclusion, there is no doubt that the EU is going through troubled times. The EU institutions that were once perceived as positive are now struggling to strengthen the ties between the EU and its citizens. Can the EU attempt to integrate further on the basis of such little trust? This is a question about which readers should think after reading the book. I consider that trust in the EU institutions is paramount for the continuation and strengthening of the EU project. Without trust there is no cohesion of the Union, and if there is no cohesion there is little or no capacity for further development. Trust in the Union (alongside trust among the member states) and cohesion are intimately connected. The EU’s transformation into a multi-level political system would not have been possible without a relatively high degree of trust among its member states. 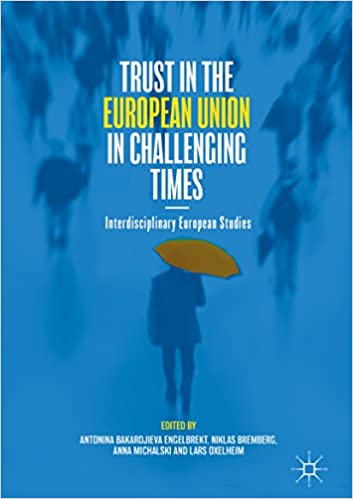