The State of Islam: Culture and Cold War Politics in Pakistan

One of Toor’s central theses is that within and outside the context of Pakistan’s history and politics, Islam is far from being a monolith. For Toor, Islam as a set of religio-political entities has been and continues to be invested with different meanings and associations by different actors who have enormously different goals.

One of Toor’s central theses is that within and outside the context of Pakistan’s history and politics, Islam is far from being a monolith. For Toor, Islam as a set of religio-political entities has been and continues to be invested with different meanings and associations by different actors who have enormously different goals. Toor’s volume analyzes the diversity of meanings and political programs which have been associated with Islam throughout much of Pakistan’s history. Some of the many themes that she examines include modernist Islam, Islam as it was fused with Pakistani (and other forms of) nationalism, the Jama’at-i Islami’s appropriations of Islam, and the Islamic socialism of Zulfiqar Ali Bhutto’s People’s Party. Toor argues that these diverse forms of Islam have been under attack by a variety of domestic and international forces. The book provides an overview of these contestations and examines trends related to polarization during Pakistan’s history.

The book also reconsiders the significant role that the Pakistani Left (to use Toor’s terminology) has played in challenging Pakistan’s religious and political establishments and its various Islamist organizations. Toor argues that the Left’s influence on culture and politics in Pakistan has been significant. She views her book as an attempt to disrupt the mainstream narratives of Pakistan’s history by offering a set of alternative analyses, which explain the current situation in Pakistan as a result of complex and contingent historical processes with domestic and international aspects. Concomitantly, Toor hopes to emphasize the significance of resistance and struggle while explaining the role of the Pakistani Left in culture and politics.

The book’s first chapter provides an overview of the entire volume while setting the context within which many different types of Pakistani Islamic identity were formed, some of which led to certain kinds of Pakistani Muslim nationalism that played a role in the founding and perpetuation of the Pakistani nation-state. The second chapter analyzes the often contradictory ways in which Pakistan’s government deployed Islam as a way of establishing West Pakistan’s hegemony over East Pakistan during the period soon after partition. At that time, there was a divisive debate in West Pakistan over the future of the Pakistani nation-state between the influential and left-wing Progressive Writers Association (PWA) and a group of liberal anti-communist intellectuals who identified themselves as nationalists. Chapter three analyzes those debates and their broader implications for Pakistan while exploring the role of the cultural Left in Pakistan in terms of countering (what Toor calls) the “reactionary politics of the establishment and its organic intellectuals” as the Left adhered to “an alternative people-centered model of the nation-state.”

Chapter four examines the relationships between various aspects of the Cold War, developments with respect to Islam and politics in Pakistan, and the regime of Ayub Khan with a particular emphasis on his modernizing efforts. Specifically, this chapter analyzes the ways in which Ayub Khan co-opted some of Pakistan’s liberal anti-communist intellectuals in his modernizing efforts which, according to Toor, were combined with deeply repressive measures and led to a significant outpouring of dissent in Pakistan. For Toor, these were some of the factors which contributed to the consolidation of a left-wing mass movement. This chapter also analyzes the complex alliances, rivalries, and machinations which were part and parcel of the relationships between Ayub Khan’s regime, liberal anti-communist intellectuals, Islamists, and members of Pakistan’s Left.

Chapter five chronicles what Toor interprets as a “dramatic turn-around” from the rise of a new revolutionary and mass-based left-wing politics in the late 1960s to General Muhammad Ziaul-Haq’s regime, which blended certain secularist and Islamic components. This chapter discusses Zia’s policy of Islamization, which sought to increase the influence of Islam in Pakistan’s laws, educational systems, and society. The chapter also examines the oppositional relationships between Zia and his Islamization policies, on the one hand, and pro-democracy advocates and their ideals, on the other. Within this context, the chapter elucidates the important role of feminist poets in expressing a series of critiques of the Zia regime’s authoritarianism and Islamization policies.

Chapter six focuses on two cases in the 1990s which became foci of national crises in Pakistan and exemplified the complex ideological landscape of the period. One case was the honor killing of Samia Sarwar, who was murdered by her family in her lawyer’s office for trying to obtain a divorce, and the second was the story of Saima Waheed, a young woman who had married against her family’s wishes. Both of these cases generated widespread debates and discussions in Pakistan about the country’s national culture and identity, the relationships between Islamic and western cultural elements in the country, and the rights of Pakistani Muslim women. Toor argues that those two cases exemplify the opportunistic ways in which powerful individuals and institutions deploy Islam. The epilogue argues that the near-destruction of the Pakistani Left in the 1980s created a vacuum within Pakistani politics, which liberals were unable to fill, and that the bellicosity of Islamists and their allies is partly the result of this failure.

Toor’s book is a clear, fascinating, and insightful analysis of the Pakistani Left during the most significant periods of Pakistan’s history. As a crucial part of its thorough examination of the histories, ideas, and structures of Pakistan’s Left, it considers the complex webs of interactions between religion, politics, and literature, which constitute some of the factors that make The State of Islam a groundbreaking work. In addition to the enormous contribution which it makes to scholarship in the field, this volume would be tremendously useful in a variety of courses including those on modern Pakistani history, women and Islam, and Islam and politics. 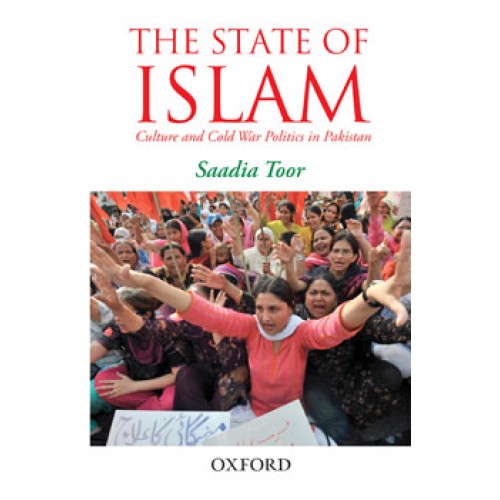