The first section covers the period from 13th to 15th centuries (“Emergence and Expansion: From Frontier Beylik to Cosmopolitan Empire”) and consists of six articles. The first article analyses identity in the earliest period using the example of food gifts. The next essay focuses on three chronicles that describe the constant shift of the Ottoman-Byzantine frontier and thus the mix of identities that prevails there. The third describes two Genoese families living in Pera during the conquest of İstanbul and their adjustment to the new circumstances followed by an article about Mahmud-pasha Angelovic who became part of the Ottoman court through the process of devshirme but who nevertheless kept close ties to his Christian circle. The penultimate piece analyzes the work of historian Neshri and his interpretation of Ottoman identity and the last article describes the path of Sufi leader who tries to incorporate into the Ottoman elite during the interregnum period but fails in doing so by choosing the wrong side.

The second section encompasses the period from 15th to 17th centuries (“Expansion and Cultural Splendor: The Creation of Sunni Islamic Empire”). The section starts with an article that discusses the first serious attempt to create an Ottoman (religious) identity that was constructed by the leading religious official Ibn-i Kemal. The next two pieces focus on Aintab and Jerusalem respectively and how after their conquest they were ottomanized through the introduction of Ottoman administration in Aintab, or through massive building projects in the case of Jerusalem. The following essay then describes the life path of a Turkish merchant who originated from Anatolia but built his career in Aleppo. The last article in this section deals with Mihrimah Sultan, the influential daughter of Suleiman the Magnificent and her investment into the visual identity of İstanbul as well as her relationship with her father.

The third section grapples with the period from 17th through to 18th centuries (“Upheaval and Transformation: From Conquest to Administrative State”). The first deals with complaints and comments from contemporaries on appointments and behavior of Ottoman bureaucrats. The next two articles deal with the fleeing of a Christian widow with her three Muslim daughters that caused tensions in Ottoman-Venetian relations, and with the case of a French soldier who “turns Turk” in order to escape German punishment respectively. Further chapters investigate the identity of Chief Eunuch of the Harem, and social-gender crisis that resulted in the murder of Valide Sultan and a couple accused of adultery. The last essay describes the case of Dragoman of Cyprus who was much more than that.

Finally the last part goes from 19th to 20th centuries (“Modernity, Mass Politics, and Nationalism: From Empire to Nation-State”). The first article focuses on ruler visibility and public ceremonies that affected the ethno-national mindset of state subjects. The next piece investigates the role of the Ottomans in (Eurocentric) science and questions the Ottoman identity as its consequence. The following paper deals with the case of the Christian Ottoman ambassador to United States, who spied on the Armenian community there fearing possible plots against the Ottoman Empire. The last two chapters are case studies on an Ottoman Greek who was torn between the Ottoman Empire and Greek state, and on Jewish brothers who were Ottomans and Zionists at the same time.

Through exploration of case studies of diverse personalities and places that were gradually incorporated into the Ottoman state, these varied articles try to illustrate what was Ottoman identity during the time and how it changed from one period to another. It is a brave move because scholars still argue on what actually constitutes identity. Thus this is not an easy question to answer even in the context of a nation-state, let alone multi-ethnic and multi-religious state as was the Ottoman Empire. The editors in their remarking note concluded that the Ottoman identity was “not static but dynamic and that Ottoman identity transformed according to individual, regional, cultural, political, and imperial interests and exigencies” (p. 15). This actually does not bring anything new and even more importantly this is not just valid for the Ottoman state but for any country in the world.

So what did it mean to be Ottoman? Surely, historic background and Ottoman consolidation of the state played a role in it –in the early periods of the Ottoman state the sense of state identity was vague, but in the last period nevertheless the Ottoman state struggled to embed the sense of loyalty into its subjects. Does this mean that being loyal to the Ottoman state was the same as being an Ottoman? The Greek ambassador from chapter twenty was definitely an Ottoman then, but what about the Frenchmen who turned Turk or dragoman from Cyprus? Were they Ottomans too? What about multiple loyalties that the last two chapters investigated?

The book implies that we should distinguish between two identities: the imperial/state and popular identity and how the first attempts to shape the other. For instance, chapters on Jerusalem and Aintab illustrate this point by exploring Ottoman imposed architecture and introduction of Ottoman administration at a local level. However, the psychological aspect that could actually give insight into the true identity of inhabitants of these cities remains hidden. There are rare personal narratives from Ottoman subjects and thus it is hard to discuss what Ottoman identity meant for them. So yes, we can follow the life path of an Anatolian merchant in Aleppo but what do we actually know about his Ottoman identity? Chapter nineteen suggests that even Ottomans did not know what constituted Ottoman identity, at least when it comes to defining their place and contributions in science. Actually, while reading all these chapters, the prevailing impression is that the Ottoman identity (if there was such a thing) was prone to constant shifting and negotiation. Namely, many personalities in this book were firstly Ottomans because it suited their personal interests (the case of the Sufı leader illustrates this point well), secondly they did not think about themselves in these terms at all (the Genoese in Galata or fleeing Christian widow for example), or thirdly their Ottoman identity meant mostly awareness of pertaining to (usually) state elite (Mahmut-pasha Angelovic or Chief Eunuchs for instance).

Therefore the book does not offer a definitive answer on the Ottoman identity but simply discusses important identity issues that are left open. This was the first goal of the book so the reader who wants to receive more specific answers will be left disappointed. However, by analyzing Ottoman periodical history and offering colorful biographies of Ottoman subjects of various backgrounds and positions (some were part of imperial and some of popular milieu) we can indeed take a look into the glittering everyday life of the Ottomans. This, after all, was the ultimate goal of the book –to give a glimpse of but not definition of Ottoman identity. I suppose that is why the book at the end does not offer conclusions but rather questions to consider. All in all, many questions but no answers. 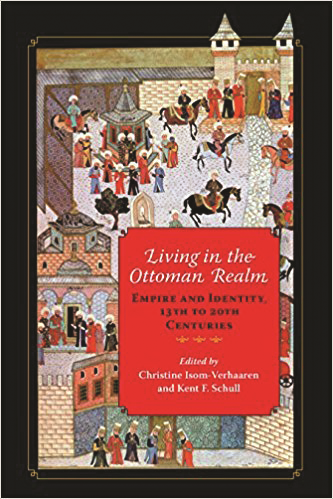