Web Panel | The Energy Equation in the Eastern Mediterranean 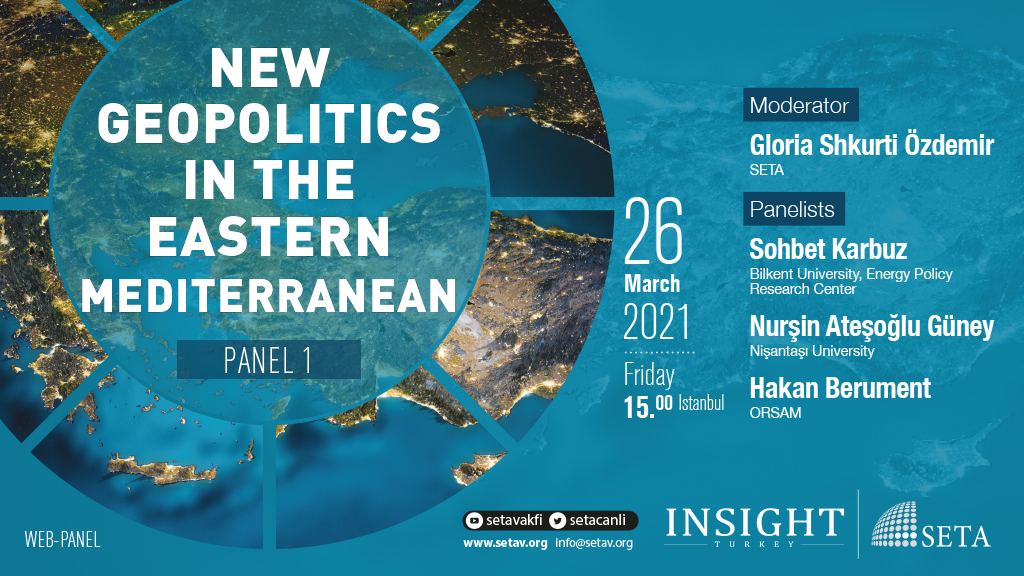 Professor Karbuz argued that the recent discoveries of natural gas reserves in the Eastern Mediterranean region is more or less equivalent to the total gas reserves of Azerbaijan and the total reserves of gas which are expected to be discovered in the following years are on par with those of the Northern Sea.

These resources have made possible for Egypt and Israel to allow the transition from oil to gas in electricity production, and created an industry revolving around the gas. These two countries have started exporting their gas resources to their neighborhood, transforming the Eastern Mediterranean region into a gas exporter region. Karbuz noted that although this transformation has taken place, the dimension of this change is underwhelming given the potential of the region which is estimated to be around 30 to 50 bem (billion cubic meters) per year.

According to him, the problem with the export of gas from the region stems from the lack of proper transportation infrastructure that limits the amount of export directed to distant markets such as the Asian one.

The second issue with the gas export is the maritime border disputes, which involve almost the totality of the countries in the region. This issue is made worse by bilateral agreements between countries, announcing unilateral exclusive economic zones or continental shelves, and the securitization of these issues.

The third issue in the region is the deterioration of political relationships between countries in the region. Greece, taking advantage of this deterioration, utilizing gas as a political tool, has established strong relationships with Egypt and Israel. The end result of these ties was the creation of the Mediterranean Gas Forum in 2019, founded by Israel, Egypt, Greece, GASC, Italy and Palestine. The forum turned into an international organization in 2020, and came into force in 2021.

Another impediment to the gas export, is the August 2020 Abraham Accords, that has caused a political shift in the East Mediterranean and the integration of Qatar in the region with the al-Ula accord. Another important development has been observed with the Philia Forum established in February 2011 and participated by France, Egypt, Greece, the GASC, the UAE, Bahrain and Saudi Arabia.

Karbuz has also specified that the common ingredient in all of these accords is the exclusion of Turkey. According to him, there is a plethora of ways to solve the issue but most important, even according to international law he recalled, is an inclusive dialog between the countries of the Mediterranean. In conclusion, Karbuz stressed that although dialog and several other instruments can improve the situation in the region, immediate mechanisms are available to improve the political atmosphere. For example, joint development mechanisms in overlapping maritime zones, joint development of gas export infrastructure and the creation of a virtual gas hub in the region. From its part what Turkey can do within this situation is keeping on with normalization of relations between Turkey and Israel, try to be more involved into the gas market of the region through Turkish Petroleum, try to develop the Gaza Marine field in Palestine, and more importantly signaling that Turkey wants dialog and cooperation with countries of the region.

Professor Ateşoğlu spoke of the energy issue in the Eastern Mediterranean region as mostly geopolitical, underlining the fact first analyses that came after the discovery of the gas fields in 2009 were mostly positive in nature, with İnternational Relations scholars pointing to the fact that gas would have brought countries together instead of being an element of discord. Contrary to these expectations, the region has experienced rising tensions ever since gas become a prominent interest in the area. The discovery of gas has also caused the rise of several different political alignments that are flexible and benefit-based in nature. Of three alignments that have come out, one is related to the gas findings is Israeli based, the second alignment is based on the ties that have emerged in the situation in Libya, the third alignment that came into being is through the signing the Abraham Accords.

These alignments have also been exploited by the U.S. after 2015 that symbolized the Russian come back to the Middle East and the penetration of Chinese influence through economic initiatives. As a response to the influence of its rivals the U.S., having semi-detached from the region, have become interested in the area once again. The shifts caused by the Arab Springs and other political developments, and the subsequent alignments that resulted have also represented a less risky and less costly alternative for the U.S. to counter Chinese and Russian influence.

Ateşoğlu stressed of how the developments led by the alignments of the local powers have been contested by Turkey, which protested against the delimitation of maritime borders, the unjust exclusion of Turkish interests in the development of gas fields and therefore has signed a delimitation of continental shelf with Turkish Republic of Northern Cyprus that has allowed for exploration of gas resources in the Eastern Mediterranean and signed a delimitation of borders with Libya, putting in danger the EastMed Pipeline project. She also highlighted that these actions based on deterrence and diplomacy are a way for Turkey to signal that dialog is the only way to share equally the gas resources present in the region.

Ateşoğlu concluded that the despite these developments, given the flexible and profit-based nature of these alignments, a thaw is also been lived in the region taking as an example the Turkey-Egypt relations, highlighting that the thorny issue of maritime disputes and the sharing of the gas resources can be solved in the future.

Professor Berument stressed that the East Mediterranean has vast resources to be used for the benefits of the countries in the region, but that the use of these resources is mostly for internal consumption leaving little for export so far. Together with this issue are other two factors, one is the lack of transport infrastructure, given the fact that the EastMed Pipeline does not seem feasible in terms of costs, the other is the fact that from the gas reserves of the Mediterranean that stretch from the Southern part to the Northern one do not represent a cost effective operation given the geological structure of the field.

The other issue that plagues the natural gas export of the region is the demand for it, given the presence of many infrastructures. Berument stressed that the facilities with which Azerbaijan exports its natural gas through Turkey have also gotten Turkmenistan’s attention that now seems interested in utilizing the same facilities, as well that the North Stream connecting Germany and Russia will be completed soon. Together with this, the U.S. plays a huge role in the LNG (Liquefied Natural Gas) market and Europe which represents a huge market for natural gas may not be able to absorb it given the less than expected economic growth.

In this scenario, there are also other elements that both complicate and facilitate the resolution of the issue as Greece is aiming at becoming an energy hub for the Balkans through the passing of a pipeline through the city of Alexandroupoli, close to the Turkish border.

Another issue is represented by electricity, as part of the natural gas will be used for its production, and electricity needs facility to be established in order to be able to respond quickly to surge in demand. This issue is also prominent for South Cyprus which has signed a contract to establish a connectivity line between the southern Cyprus and Israel that conflicts directly with Turkey’s continental shelf.

Berument tried to underline how this issue is not to be looked only through one perspective, being the export of gas, the issue of maritime disputes and the pipeline, but it has be looked in an omni-comprehensive way understanding the gas market, the pricing the economic feasibility of the export and the issue of energy production in the region. In order to do also the role of Turkey has to be taken into account. Being the competitiveness of the Eastern Mediterranean gas subject of discussion, According to Berument, being a large and industrialized country, with a strong demand for natural gas, Turkey, may represent an easier alternative for the exporting countries. Energy wise Turkey can also provide energy at a very low cost to the totality of the Island of Cyprus, which utilizes old diesel generators which are neither competitive nor efficient.

In his concluding remarks Berument highlighted the difficulty of solving the issues of the region given the complexity of the issue and the many external interests present, although stressed that some of these issues are easy to be confronted therefore working slowly towards a greater cooperation.

Insight Turkey hopes that the panel was fruitful and provides a better understanding of the issue at hand. The full panel can be found on our Youtube channel.