Exit from Hegemony: The Unraveling of the American Global Order

American hegemony, established in 1945, gained momentum after the collapse of the Soviet Union and has largely shaped the structure of international politics. Most states, willingly or unwillingly, have adopted the principles of the liberal order, such as democratic politics, free economic exchange, and multilateral institutions. However, the long-standing American hegemony is eroding today. Alexander Cooley and Daniel Nexon’s Exit from Hegemony: The Unraveling of the American Global Order offers a detailed and timely analysis of that process. The authors contend that we are “experiencing a steady but unmistakable transformation of the ecology of international order” (p. 14). The root causes of that transformation, the authors argue, are the presence of great power challengers, the availability of exit options for weaker states, and the opposition of illiberal transnational networks. Cooley and Nexon stress that although the orthodox understanding of hegemonic transition exclusively rests on great power war, the transition has already begun without a single shot being fired. The authors conclude that no American government could reverse the trend and “exit is upon us” (p. 17).

Exit from Hegemony consists of eight chapters. The introductory chapter recalls the past debates on the hegemonic decline that took place during the 1970s and 1980s. Those debates were far from reflecting the reality since American hegemony proved its robustness. However, “this time is different,” (p. 1) the authors argue, because Russia and China are now challenging the liberal international order, weak states are exerting pressure from below and right-wing transnationalism has arisen as a counter-order movement. Chapter 2 first defines the concepts of international order and liberal international ordering, then elaborates on the sources of variation in the ecology of international orders. Accordingly, international orders have architectures and infrastructures and while the former refers to rules, norms, and values, the latter is composed of relationships, practices, flows, and interactions (p. 16). Variation in the ecology of international orders takes shape according to “the density of their infrastructures and the degree to which their architectures are harmonized or conflictual” (p. 34). Chapter 3 exposes how hegemonic orders unravel. The authors argue that weaker states and transnational counter-order movements could have a share alongside great powers in hegemonic unraveling. Chapters 4, 5, and 6, respectively, explore the role of great powers, weaker states, and transnational illiberal actors in that process. Chapter 7 demonstrates that the Trump presidency is a symptom rather than a primary cause of the hegemonic unraveling. Chapter 8 first concludes that Washington cannot reverse the hegemonic decline, then speculates about three possible scenarios for the postliberal international order.

The novel contribution of Exit from Hegemony is the idea that even weaker states and nonstate actors can contribute to the hegemonic decline and structural change. Realists traditionally take for granted that the story of international politics is written parallel to the great powers of an era.1 However, Cooley and Nexon offer a more sophisticated argument on the process of hegemonic struggle and structural change. Accordingly, weaker states could exit from hegemony by opting for the alternative public goods provided by great power challengers and undermine the liberal international order as a result. Authoritarian states today undermine American hegemony by affiliating with alternative patrons such as Russia and China. Having secured alternative assistance, those states have readily advocated their sovereignty and national self-determination rights in the face of criticisms that developed parallel to the liberal international order. Moreover, right-wing, and illiberal transnational movements have undermined American hegemony by disrupting the principles of the liberal international order and promoting an illiberal one in its place. Those movements share a skepticism toward immigrants, advocate an ethnic understanding of Western civilization, present Islam as a threat and hold a biased stance toward the status of women and sexual minorities (p. 147). Having separated the independent causal variables –great power challengers, weaker states, and transnational movements– the authors underline that these variables are feeding off each other and accelerating hegemonic unraveling.

Although Exit from Hegemony offers a lucid understanding of the present hegemonic decline, a friendly critique of the book could encourage readers to think more about the subject. First, the authors take the hegemonic unraveling for granted. That understanding may cost readers a missing understanding of sources of resilience. American hegemony has created an environment that reduces international conflicts, enhances mutual interests, institutionalizes relations, and legitimizes certain kinds of behaviors.2 Thus, exit from hegemony may not be as tempting for states as it appears. Second, the book overestimates the Russian-Chinese cooperation targeting the liberal international order. Although the authors acknowledge that “Moscow does fear that it has become Beijing’s junior partner” (p. 83), they conclude that Russian weakness relative to Chinese strength is an inconsequential tension for decision-makers in Moscow. However, imbalance of power and geographic proximity are central variables in threat perception3 and Russia shares a long border with rising China in Asia. Thus, further research is needed to understand whether eroding American hegemony is a valid reason for Russia and China to overcome mutual mistrust and reconcile their interests. Third, although the authors innovatively expose the causal roles of weaker states and transnational movements apart from great power challengers, they unconsciously reduce their causality to the challenges made by Russia and China. The authors often mention the Russian and Chinese efforts to undermine the liberal international order by feeding weaker states and illiberal movements. One may wonder whether weaker states and transnational movements could challenge American hegemony without Russian and Chinese support. 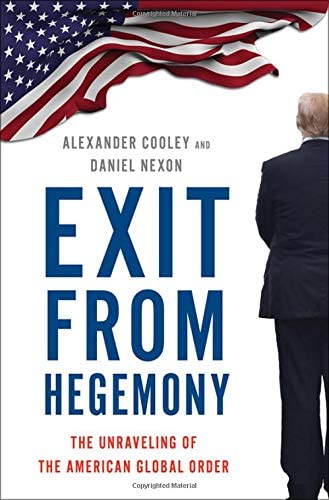