As Barack Hussein Obama’s second term in the office finalized, one of the hottest debates about his administration recently has been the American foreign policy towards Syria. Although many pieces have been written about the U.S., Syria and the Arab Spring, a complete work focusing on U.S.’ Syria policy seems lacking. Kılıç Buğra Kanat’s A Tale of Four Augusts: Obama’s Syria Policy represents an important study to fill this gap by shedding light on the developments, discourses, and policy preferences in the American side.

As Barack Hussein Obama’s second term in the office finalized, one of the hottest debates about his administration recently has been the American foreign policy towards Syria. Although many pieces have been written about the U.S., Syria and the Arab Spring, a complete work focusing on U.S.’ Syria policy seems lacking. Kılıç Buğra Kanat’s A Tale of Four Augusts: Obama’s Syria Policy represents an important study to fill this gap by shedding light on the developments, discourses, and policy preferences in the American side. The author provides a detailed account for four years between 2011 and 2015, focusing on the four Augusts; in each case a milestone event was witnessed for Obama’s foreign policy towards Syria. Kanat argues that despite the major triggering events of four Augusts, the U.S. could not overcome its inaction and develop a clear response to the crisis in Syria because of the insufficient motivation and resource allocation, conflicting arguments and lack of coordination among decision-making institutions, and the exclusionary hegemony of Obama’s ‘inner circle’ on the U.S. foreign policy decisions.

In chapters one and two, Kanat explains the changing course of U.S.-Syrian relations. While the relations was abysmal under the George W. Bush’s ‘war on terror’ campaign, in Obama’s first term, a rapprochement took place between the two countries because of the other U.S. strategic priorities in the Middle East, such as preventing Syria from transforming into a safe haven for terror groups. Chapters three and four point out the major U.S. delusion or wishful thinking that Assad could reform the country and how this faded away withthe serious disagreements among bureaucratic institutions which further inhibited the development of consistent policies. Chapter five and six explain the implications of Obama’s famous ‘red line’ speech and argues that in spite of the strong messaging, the U.S. had not developed a clear strategy; it even did not undertake serious preparations to deliver its promise. Furthermore, as Kanat argues, the usage of chemical weapons in spite of the clear messages of Obama meant the U.S. deterrence obviously did not work. Chapter seven discusses the ultimate failure of the Train & Equip program because of the inadequate motivation and resources put in by the American leadership and the struggle with ISIS which led the U.S. to adopt a strategy that is solely based on a counter-terrorism campaign in Syria. Lastly, chapter eight explains how the Russian military involvement into Syria surprised the U.S., and the administration’s inability to neither calculate Russian intentions and capabilities nor respond to its actions in Syria because of the common wishful thinking among key U.S. politicians.

Kanat argues that despite the harsh rhetoric, the Obama administration embraced against the Assad regime in Syria, with clear threats of “red lines” after the reports of utilization of chemical weapons, the administration was not able to adopt either substantial concrete measures against the Assad regime, nor could they realize its rhetoric into action suggested by the red line despite multiple violations. Kanat states that the U.S. administration had never sufficiently or clearly prepared for engaging into the Syrian conflict, and the strong messaging in fact indicated Obama and other officials’ desires to place themselves on ‘the right side of history.’ For Kanat, the Obama administration could not grasp the real problem in Syria. Since the Assad regime has been the root cause of radicalization in the country, focusing solely on ISIS with a strategy to degrade and destroywas structurally inefficient and could not provide peace and stability to the region. Another major reason behind the American foreign policy failures in Syria, according to Kanat, has been the hegemonic and exclusionary dominance of President Obama’s advisory team in foreign policy decision making processes. This dominance hindered ‘inter-agency processes’ between key institutions such as the White House, State Department, and Pentagon as well as prominent individuals. Kanat states that Obama conducted foreign policy with only a few people around him at the White House who shared ideas and arguments in common over what was happening in Syria.

Kanat lucidly elaborates that the U.S. under the Obama administration never took the disaster in Syria seriously enough, as the lack of coordination and collaboration among key decision-making institutions proved. Obama’s distraction strategy in order to gain time as well as to avoid military action, and the delusional overconfidence to deterrence further supported this tendency. On the other hand, the author appears to put too much emphasis on the American role in the Syrian crisis. One can get caught up that what happened in Syria is the result of American foreign policy which is characterized as lack of: action, decisiveness or a clear strategy. In so doing, it undervalues the structural factors of international relations in a contemporary world, such as multi-polarity or the significance of international organizations. It is not possible to adequately assess Obama’s Syria policy without taking these limiting factors into consideration even if we are talking about the United States. Kanat also claims that the U.S. had neglected the ‘calls for action from the international community’; therefore one may perceive the U.S. as a hegemonic world police where the consent and sovereign interests of other major powers come into question. Furthermore, which countries or actors compose the international community or who called the U.S. to take action in Syria are crucial questions that the author did not explain, in addition to the strong Russian and Chinese objections to any intervention into Syria.

Kilic Bugra Kanat’s A Tale of Four Augusts offers a comprehensive account of Obama’s foreign policy choices towards the Syrian crisis in a turbulent time period from 2011 to 2015. The author gives many examples and much first-hand information to further elaborate the minds of American foreign policy decision makers and the book is structurally well designed. Although, it suffers from overstressing the agency and overlooking the structural factors of international politics, A Tale of Four Augusts is a concise work for understanding how U.S.’ Syria policy was shaped and evolved under the Obama administration. 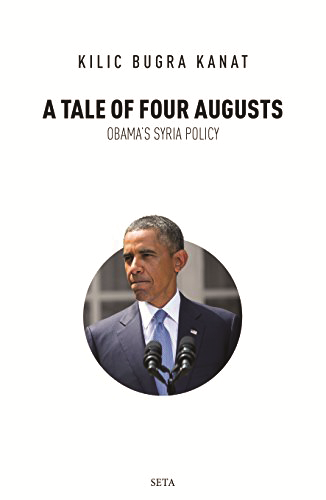