Architectures of Violence: The Command Structures of Modern Mass Atrocities, from Yugoslavia to Syria

Architectures of Violence: The Command Structures of Modern Mass Atrocities by Kate Ferguson is highly recommended for researchers of violence and genocide and practitioners working to prevent such brutalities from taking place. Although readers unfamiliar with Balkan politics might find it hard to follow, through well-constructed arguments, Ferguson sets an agenda for all those interested in a more comprehensive, social-scientific approach to understanding war and conflict.

Violent non-state actors are one of the most contentious subjects in international security studies. The majority of the work dealing with this subject mainly focus on those actors that exert violence beyond or against the state’s authority. Throughout history and within the political science and international relations literature, the focus has mainly been on those irregulars: mercenaries, rebels, insurgents, and terrorists. Nevertheless, on most battlefields, there are other types of actors with different names according to their locality. In Syria, they are Shabbiha; in Darfur, Janjaweed; in Rwanda, Interahamwe. Despite their differences in expression, language, or region, they are similar in their activity: paramilitarism. In Architectures of Violence: The Command Structures of Modern Mass Atrocities, Kate Ferguson draws attention to this phenomenon. The author’s primary focus is the period of “the dissolution of Yugoslavia” throughout the 1990s. Ferguson analyzes the events in Serbia, Croatia, and Bosnia Herzegovina that reached a certain level defined as genocide. Pursuing an often archeological investigation within the archives of the International Criminal Tribunal for the former Yugoslavia (ICTY) and beyond the classical narrative on ethnicity, culture, or religion, the author makes her case clear about how these brutal scenes took place.

The author positions her work within the literature on genocide and mass atrocity studies. Doing so allows an analysis that avoids the emotional terminology common in this area of research (pp. 14-15). One of Ferguson’s most significant contributions is to introduce a novel term‒architectures of violence‒“as a means of better understanding the structures, networks, and relationships of command, control, and influence that connect states, localities, organized crime, and society with the perpetration of international crimes” (p. 7). In a sense, the book follows this line of structuring in its chapters.

Ferguson begins by setting the scene for the rest of the book by detailing what is meant by two main terms: ‘architectures of violence’ and ‘atrocity,’ and explaining their relevance to the case studies she presents. For example, the ruling elites denied their participation in ‘ethnic cleansing,’ yet their connections are evident from the beginning of paramilitary formations. Even though they were not official military members and had their uniforms and badges, paramilitaries collaborated with political parties and prominent public figures during the most brutal stages of the war. The author stresses that scholars and policymakers who delve into these issues have had difficulty establishing the relationship between states and paramilitary units, even though most of these paramilitary groups consisted of volunteers trained by interior ministries.

Architectures of Violence first analyzes the three primary case studies in separate chapters that address events in Serbia, Croatia, and Bosnia Herzegovina. Ferguson clarifies her arguments by going into excruciating detail on the long list of actors, namely, architects of violence. Having inherited the majority of the Yugoslav army, Serbia became the main, but not the only, instigator of violence during this era. The international community focused its attention on the well-known figures who commanded the military personnel in Bosnia: Radovan Karadzic and Ratko Mladic. However, on the micro-level, the atrocities carried out by volunteer brigades are epitomized in the infamous figure of Željko Ražnatović, also known as Arkan. With his Serb Volunteer Guard (at times known as Arkan’s Tigers), he participated in operations first in Croatia and later in Bosnia.

As a multi-dimensional conflict, the Yugoslav wars forced every party to form their own line of defense and paramilitary groups. Under the leadership of Tudjman, Croatia deployed a pragmatic and opportunistic strategy both on who would be the enemy and how to regulate volunteers and defense units. Similar to the case of Serbia, the paramilitary formations kept close connections with the official authorities without being part of any official structure. Amid all the chaos during the conflict, the Bosnian defense is a unique example that Ferguson analyzes from different angles. Because of the siege of the capital Sarajevo, Bosnian authorities had to keep a degree of relationship with non-state actors, not just to defend the city but also to provide for the daily lives of its citizens. Having been unable to establish a strong connection and coordination with localities outside of Sarajevo, Bosnia had to combine paramilitarism with the black market economy. That last point is crucial since paramilitary groups reinforce military operations and organized criminal networks. Ferguson devotes a specific chapter to them, in which she discusses the criminal and corrupt aspects of the conflict.

Architectures of Violence stands out as not only a descriptive account of who committed which crime and where but an eloquent analysis that considers both international and societal dynamics. The Serbian Mafia that operated throughout Europe, terrorist elements within the Croatian diaspora, and “Foreign Fighters” from around the Muslim majority countries volunteering to fight on Bosnia’s side all had different effects on how the war developed. The author helps readers understand these complex dynamics in relation to the context of everyday politics.

On the societal dimension, the book calls attention to how everyday people become complicit in the face of mass violence and atrocities, as well as those who refused to join forces and resisted the war. Architectures of Violence is a conscious and well-thought-out intervention by Ferguson since post-Cold War approaches to studying identity-based conflicts‒ from ‘clash of civilizations’ to ‘new wars’‒have rested their emphasis on the violent and criminal events in the Yugoslav wars. By investigating this era from a wide range of perspectives, including the historical narratives that fed the paramilitary mobilization and command and-control mechanisms, the author attempts to move beyond studies that emphasize the conflict as primitive and inferior.

Ferguson opens a valuable discussion on how the International Community could prevent mass violence and what caused them to fail to act in the face of the news coming out of the war zones. Indeed, the Yugoslav wars, particularly the atrocities in Bosnia, feed the narrative on “Responsibility to Protect,” yet in the ongoing situations in Syria or Myanmar, firm actions are not being taken to stop the conflict, let alone bring those responsible for atrocities to face justice. The inability to prosecute wrongdoers and prevent such atrocities stems from international law’s attention to only the gravest acts of mass violence, prominent state officials, and (in)famous cases.

Architectures of Violence: The Command Structures of Modern Mass Atrocities by Kate Ferguson is highly recommended for researchers of violence and genocide and practitioners working to prevent such brutalities from taking place. Although readers unfamiliar with Balkan politics might find it hard to follow, through well-constructed arguments, Ferguson sets an agenda for all those interested in a more comprehensive, social scientific approach to understanding war and conflict. 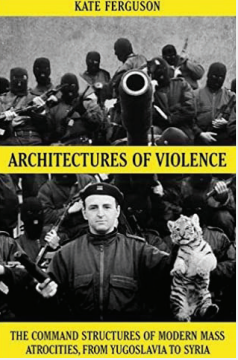 Non-State Challenges in a Re-Ordered World: The Jackals of Westphalia