Artillery of Heaven: American Missionaries and the Failed Conversion of the Middle East

In this remarkable book, Ussama Makdisi offers a marvelously subtle analysis of American missionary work in nineteenth-century Syria, and just as importantly, the Syrian Maronite reaction to the missionaries’ overtures. Although much of the work on American missions has focused primarily on the missionaries, Makdisi meticulously reconstructs the cultural collision that transpired in Syria, and shows how the collision perplexed and transformed the religious assumptions of both sides. This book is now the field’s best micro-history of the early Protestant missionary encounter.

In this remarkable book, Ussama Makdisi offers a marvelously subtle analysis of American missionary work in nineteenth-century Syria, and just as importantly, the Syrian Maronite reaction to the missionaries’ overtures. Although much of the work on American missions has focused primarily on the missionaries, Makdisi meticulously reconstructs the cultural collision that transpired in Syria, and shows how the collision perplexed and transformed the religious assumptions of both sides. This book is now the field’s best micro-history of the early Protestant missionary encounter.

Makdisi begins by elaborating the starkly different religious worlds of New England’s Puritan settlers and Mount Lebanon’s Maronite community, as seen primarily through the roughly contemporary writings of Cotton Mather of Boston, Massachusetts, and Istifan Duwayhi, patriarch of the Maronite Church in the late seventeenth century. Mather’s Puritanism was millennialist, expecting that religious adversaries and the “heathen” would be destroyed and/or converted by the inexorable march of the Christian gospel. The hope for conversion went substantially unfulfilled with the New England Puritans’ most obvious missionary target, their Native American neighbors. The Maronites, by contrast, emphasized survival under Ottoman rule and fidelity to Rome, to which their church had submitted in the twelfth century. Maintaining orthodoxy was the key to their religious agenda, not seeking conversion of others or trying to end coexistence.

To Makdisi, the American Board of Commissioners for Foreign Missions (ABCFM), the chief American missionary society of the nineteenth century, was “indelibly stamped by the template of the Puritan experience with the Indians” (52). Makdisi may overstate the actual connections between Puritan missions to Native Americans and the ABCFM’s global efforts, as it is not clear to what extent the ABCFM missionaries consciously felt they were completing the unfinished business of Puritan evangelism of Indians. Nevertheless, Anglo-American Puritanism certainly had a genealogical connection to the ABCFM missionaries, as did the “disinterested benevolence” of the New Divinity theologians of the late eighteenth century. Christian benevolence required that the missionaries take the gospel to the heathen and to unconverted, nominal Christians wherever they could be found. Doing so would fulfill essential prerequisites to the coming of the millennium prophesied in the Bible.

When the handful of ABCFM missionaries arrived in the Middle East in the early 1820s, their optimism about the gospel and Bible made them deeply insensitive to the religious culture which they entered. As they visited various churches and monasteries, they badgered priests and monks about the deficiencies of Catholic or Eastern Orthodox theology. The missionaries’ failed to grasp the differences of their new cultural location. Theirs was “a mission born of a particular moment in American history as it collided with the realities of an entirely different moment in Ottoman Arab history” (88). They were used to being cultural imperialists, but in the well-established multi-religious milieu of the Ottoman Empire, they had no means of imposing their religious agenda. All they could do was make rude, poorly received arguments. The patriarch Yusuf Hubaysh became so concerned about the missionaries’ threat to Maronite orthodoxy that he condemned them in 1823. The missionaries, in his view, were wolves in sheep’s clothing, seeking to disrupt the Maronites’ long-lasting theological purity.

Not all Maronites agreed with Hubaysh. As'ad Shidyaq, a Maronite language teacher who came to work for the missionaries, embraced their faith in 1825. Despite the warnings of the patriarch, As'ad began to proselytize for the Americans’ conversionist beliefs. In a deeply sympathetic chapter on the convert, Makdisi portrays As'ad as “the first to try and reconcile hitherto irreconcilable constructions of faith” (111). His efforts incurred the wrath of the Maronite leaders, even as the missionaries abandoned him to his fate. Patriarch Hubaysh offered increasingly urgent appeals for As'ad to return to the Catholic faith, but As'ad refused to concede that he had left the fold. He only meant to bring the Maronites back to their original faith, the apostolic tradition displayed in the New Testament. As'ad’s public criticism of the Maronite hierarchy was unfathomable and intolerable, given the Maronites’ priority of maintaining orthodoxy in the plural Ottoman environment. The patriarch began to paint As'ad as insane, and had him detained at a Maronite monastery. Repeated escape attempts led to his torture and incessant pressure to repent. Violence associated with the Greek revolt against the Ottomans led the American missionaries to leave Lebanon in 1828, and As'ad soon died in prison. Makdisi sees the vicious suppression and abandonment of As'ad as tragic fallout from the collision of these two cultural systems.

Over time, American missionaries used As'ad’s death as a justification for a more civilizational mission in Syria. Increasingly, the chief problem the missionaries tried to address was not so much their evangelistic targets’ lack of saving faith, but their degraded culture. The turning point in Americans’ attitude came with the Druzes’ massacres of Maronites in Syria in 1860. From this point forward, the American missionaries claimed more sympathy for the eastern Christians, whom they saw as assaulted by bloodthirsty Muslims. Because of the increasing western imperial presence in the Ottoman Empire after 1860, the missionaries could also focus on transformation of Arab culture by the building of hospitals and schools, most notably the Syrian Protestant College. Although Americans had plenty of reason to criticize their own nation’s history of race relations, the missionaries came to see American Christian culture as the solution to the violence of the primitive Ottoman world.

Makdisi concludes on a more hopeful note by examining the ecumenical temperament of Butrus al-Bustani, whose conversion under the missionaries came through similar circumstances to As'ad Shidyaq’s. But Bustani converted in the 1840s after the missionaries had put considerable pressure on authorities to allow them and their converts to operate freely, and the Ottomans had recognized Protestants as a protected group. In Bustani, Makdisi sees a truly new creature of the clash between American and Ottoman culture, as Bustani came to advocate tolerant education for the varied religious groups represented in Syria, and coexistence of these people as equal subjects in non-sectarian political community. 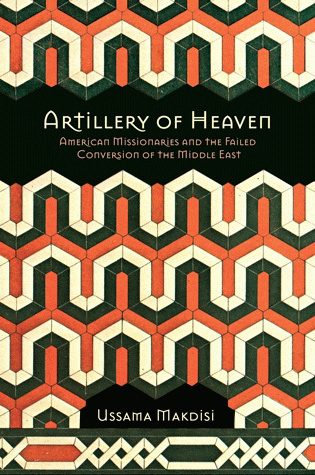