Autobiographies of Orhan Pamuk: The Writer in His Novels

Autobiographies of Orhan Pamuk is one of the best introductions yet to the works of Turkey’s most famous author. This literary and biographical companion provides encouragement for those confounded by the many complexities conjured up by the 2006 winner of the Nobel Prize for Literature. Michael McGaha untangles the way Pamuk weaves his own life into almost every story, gives critical accounts of all his major works and cleverly manages to teach the reader much about the history of modern Turkey as well.

Autobiographies of Orhan Pamuk is one of the best introductions yet to the works of Turkey’s most famous author. This literary and biographical companion provides encouragement for those confounded by the many complexities conjured up by the 2006 winner of the Nobel Prize for Literature. Michael McGaha untangles the way Pamuk weaves his own life into almost every story, gives critical accounts of all his major works and cleverly manages to teach the reader much about the history of modern Turkey as well.

At the end of this succinct and compelling analysis -- the text is just 180 pages long -- the reader feels in command of the content of Pamuk’s books, how Pamuk wrote them, what Pamuk says he intended and what critics in Turkey and elsewhere say they think Pamuk really meant. With respectful but forensic skill, McGaha, a veteran professor of Spanish literature at California’s Pomona College, picks apart controversies surrounding the author’s political statements and his choice of translators. Above all, he has managed this with an admirable clarity, precision and lightness of touch.

Chapter 1 sets the scene with a well-researched account of the political row in 2005 that propelled Pamuk into the world news and direct conflict with right-wing nationalists and a part of the Turkish establishment. [McGaha shows that, before being translated back and forth between English, German and Turkish, Pamuk’s original comment was probably “Thirty thousand Kurds were killed here. And a million Armenians. Hardly anyone dares mention it. So I do. And that’s why they hate me.” This turned into a self-fulfilling prophecy, and the outpouring of vitriol against Pamuk in Turkey was shocking, not to mention threats on his life. A top columnist called Pamuk a “miserable creature,” another that “he wants to tell the world how horrible Turkey and the Turkish people are.” Legal charges followed, later dropped, for “insulting Turkishness.”]

The second half of the first chapter introduces Pamuk’s family, part of which came from the Caucasus during the Russian-Ottoman wars in the late 19th century. His paternal grandfather, an engineer, made a fortune in 1920s republican railway building. His father had mixed success as a businessman, but was on occasion a chief executive of IBM in Turkey, Koç family companies and state industry. Pamuk was born in 1952. Pamuk says his father, an avid reader, collector of poetry and intellectual, “projected into my spirit the idea that being an artist is a good thing.”

The class clown and mimic at school, Pamuk wanted to be a painter. His parents persuaded him to study architecture instead, but after two years he lost interest in the idea of building more of the soulless apartment blocks that were devastating his native city. He decided to become a writer and enrolled in journalism school, graduating in 1977.After six months of trying poetry, he chose the novel. In 1979, while still living at home with his mother, the manuscript of his first book won equal top prize in a Milliyet newspaper competition. He never looked back.

Cevdet Bey & Sons (1982), his first novel, is modeled on three generations of his father’s family, who lived in a grand stone mansion in Istanbul’s Nişantaşı neighbourhood and then in an apartment block they built on a plot next door. His second book, The Silent House (1983), set in a summer house like the one where Pamuk spent his wilder student days as part of a privileged set with fast cars and speeboats, portrays the 1970s conflict between right-wing and left-wing extremists. Next was The White Castle (1985), set in the 17th century, a sophisticated doppelganger story about an Ottoman astrologer and his look-alike Western slave. Pamuk said it took its emotional mainspring from his jealous rivalry with his brother Şevket, and from his sense of being on the margins of Europe. It represents his insistence on “saying no, I am at the center.”

Pamuk spent the next three years in New York, where he wrote The Black Book (1990), which reflects his discovery there of a love for the classics of Turkish, Persian and Arabic literature. Then came The New Life (1994), which McGaha judges his weakest, uncharacteristically full of “fuzzy, neoromantic unruliness … marred by an excess of cleverness that unsuccessfully seeks to mask the author’s self-absorption and self-pity.” This cleared the way, however, for My Name is Red (1998). A murder mystery set among Ottoman miniaturists that “radiates joy”, McGaha here finds the would-be painter at the top of his form. The book also portrays Pamuk’s “most vivid” female character, a woman based so closely on his mother that Pamuk gave her his mother’s name and called her sons Şevket and Orhan. Then came Snow (2002), an easier political novel in which Pamuk says he tries to “destroy the clichés” in its portrayal of a secularist coup and an Islamist rebel. After that he produced Istanbul: Memories and the City (2003). The melancholy memoir pushed Pamuk’s principle of honest beauty over privacy so far that it distressed his aged mother and his brother broke relations with him for a while. Pamuk’s latest novel, Museum of Innocence (2008), was published after McGaha’s companion went to press.

Throughout, McGaha shows that all Pamuk’s works contain at least one character that stands for the author himself, and often one or more other members of his family. Pamuk “ransacked” world literature for ideas and techniques, many of which McGaha deftly points out in his commentaries -- from Cervantes’ Don Quixote in The White Castle to Rumi’s Persian-language Mathnawi, Sheikh Galip’s Ottoman Beauty and Love and James Joyce’s Ulysses in The Black Book. With his work, Pamuk succeeded in igniting mass literary interest in the notoriously book-shy Turks, and, with translations in about 50 languages, in making a wide international public aware of specifically Turkish issues: hesitation between East and West, friction and overlap between Christianity and Islam, and the pain of being an under-appreciated, developing country that only recently lost a grand imperial past. 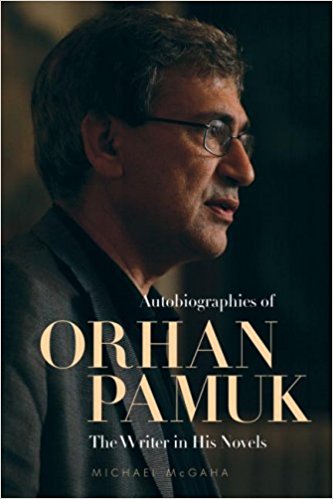