Paul Mojzes is a well-informed and eminent historian of religion with a profound interest in the study of ethno-religion as the rationale for genocide. In this book, Mojzes is set to examine the Balkan genocides and ethnic cleansing during the troublesome twentieth century.

Paul Mojzes is a well-informed and eminent historian of religion with a profound interest in the study of ethno-religion as the rationale for genocide. In this book, Mojzes is set to examine the Balkan genocides and ethnic cleansing during the troublesome twentieth century. He offers his readers an excellent, comprehensive and systematic, narrative of the horrific events that dominated the first and last decades of the previous century. Balkan Genocides develops the argument of how Balkan nations frequently were immersed in genocides and ethnic cleansing, mainly due to the power shifts in the region and the concept of ‘cycle of revenge.’ The book covers the Balkan Wars (1912-1913), World War I, the Greek-Turkish Wars, World War II, the post- World War II ethnic cleansing and genocides, and the Yugoslav Wars of disintegration during the 1990s.

The study begins with a careful discussion of the two terms central to the narrative: genocide and ethnic cleansing. Mojzes acknowledges that the definition of genocide is divisive within academia. However, like many genocide scholars he believes that the word intent remains fundamental to its definition. Ethnic cleansing, on the other hand, to Mojzes is a more limited notion than genocide. In his view “every genocide is ethnic cleansing, [but] not every ethnic cleansing is genocide” (p. 48). Moreover, Mojzes discusses other concepts, such as po-grom and holocaust, but he is vigilant not to shift the logical attention away from the terms genocide and ethnic cleansing. When he scrutinizes the Balkan Wars of 1912-1913 (chapter three), relying mainly on qualitative reports and interviews produced by Carnegie Commission, Mojzes finds a compelling case that genocide took place when Greeks systematically massacred Turks in the first Balkan War. Furthermore, according to Mojzes, these reports communicate the Greek “systematic killing of Bulgarians and Macedonian Slavs in the second Balkan War” (p. 31). However, the study also finds that by 1913, Turks were engaged in massive vengeance against not only Bulgarians and Greeks, but also against Armenians.

In the chapter that follows, Mojzes looks into the Bulgarian revenge against its neigh-bors/adversaries during World War II. He lucidly illustrates how the Bulgarian offensive, accompanied by pitiless killings and tortures, in Serbia and Macedonia, produced ethnic cleansing, at minimum (p. 43). Bulgarians swept parts of Serbia and Macedonia because after allying with the Central Powers in 1915 they were convinced that they would recover all of the territory they lost during the Second Balkan War.

The next part of the book examines the immediate post-WWI period and the multiple genocides that occurred during this era. Here, Mojzes gives principal attention to genocides and exterminations in Croatia and Serbia. According to the author, genocide against Serbs, Jews, and Roma (Gypsies) occurred in Croatia during World War II (pp. 56-65). The author claims that perpetrator of this genocide was the Ustasa government, a puppet regime installed by Hitler and infected with the Nazi ideology. More captivatingly, Mojzes argues that the Croat Catholic Church provided the moral support for exterminations and killings, some priests became even directly involved in the process (p. 61). Nevertheless, death camps in post-war Serbia were just as fully operative as in Croatia. In Sabac and ‘Red Cross’ death camps in Serbia, thousands of Croats, Jews, and Roma became part of the final solution or the journey of no return. Just like its Croat counterpart, the Serbian Orthodox Church played an undeniable role in these genocidal acts in the post-war period. As Mojzes rightly asserts, the Serb Orthodox priests joined the Cetniks, with weapons in their hands, in killing thousands of non-Serb and non-Orthodox (p. 97). These post-war genocidal events significantly influenced and shaped the incidents that led to the outbreak of the bloody Balkan wars of the 1990s.

Finally, the last part of the book looks at the most catastrophic events in Europe since the holocaust: the wars in Croatia, Bosnia, and Kosova. Mojzes’s conclusion is that “these wars were religious wars fought by irreligious people” (p. 146). They were not classical religious wars over some theology, rather they were wars in which religious leaders and religious institutions became the “spokesmen for their ethnoreligious group” (p. 149). Because the major ethnic groups in the former Yugoslavia were not distinct in language, in skin color, or even in hair and eye color, the real identity marker among ethnic groups was religion. Hence, religion is the critical independent variable when trying to understand both the Balkan Wars of the 1990s and the genocides (such as the one in Srebrenica) it produced. Mojzes’s claim that genocide against Muslims in Srebrenica was intentional and aimed at destructing a particular group is convincing and well-documented.

Balkan Genocides is well-organized and filled with sound analysis. His detailed examination of the ‘unrecognized genocides’ in twentieth-century Balkans is quite appropriate. Towards the end of the study, Mojzes provides a short and careful discussion of the difficulties the International Criminal Tribunal for Yugoslavia (ICTY) is facing in bringing war criminals to justice. Moreover, the point that genocide and ethnic cleansing were ‘knocking’ at Macedonia’s door at the beginning of the twenty-first century, during the 2001 conflict between ethnic Macedonians and ethnic Albanians, is cogently argued and supported.

However, the book has its shortcomings. First, Mojzes does not explicate how he measures the multiple genocides that he identifies throughout the study. At best, he claims that a single cause theory of genocide does not suffice as an adequate explanation (p. 4). Secondly, at the beginning of the study, Mojzes claims to play no favorites. Unfortunately, to those well-informed with the recent Balkans history it is clear that he fails to do just that. For example, Mojzes puts heavy emphasis on the Croatian offensives against Serbs in the 1990s (i.e. Operation Storm and Operation Flash), but he fails to mention the notorious Operation Horseshoe, the Serb military campaign to ethnically cleans Kosova of its Albanian population. Finally, Mojzes claims that genocide against Serbs took place in Kosova in the aftermath of the 1999 war. Again, he fails to convincingly back-up and document his claim.

To sum up, Paul Mojzes does more than provide an alternative account for the Balkan genocides and ethnic cleansing in the twentieth century. His analysis and the interpretation of the different wars in the Balkans during the last century, and horrors they produced, are very engaging. While the study would benefit from wider reliance on ‘secular’ sources, I believe Mojzes’ book adds greatly to our understanding of ethnic conflict and genocide. I highly recommend Balkan Genocides to anyone interested in topics of ethnic cleansing, genocide, ethno-religious nationalism, ethno-religious warfare, and cultural vandalism. 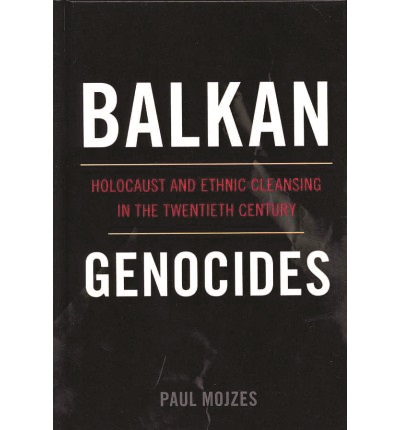