Beyond Turkey's Borders is based on Banu Şenay’s PhD dissertation, which is an ethnographic study of Kemalism among migrant Turks in Australia. Şenay conducted her fieldwork in Sydney in 2007 and 2008 among Turkish migrants who have settled there since the late 1960s.

Beyond Turkey's Borders is based on Banu Şenay’s PhD dissertation, which is an ethnographic study of Kemalism among migrant Turks in Australia. Şenay conducted her fieldwork in Sydney in 2007 and 2008 among Turkish migrants who have settled there since the late 1960s.  She draws her material largely from formal and informal interviews with first- and second-generation migrants, as well as Turkish and Australian state officials. She also performs content analysis of relevant community papers’ archives and contemporary visual and textual materials, such as political speeches, cartoons, internet blogs, etc., produced, shared or followed by the migrant actors of “trans-Kemalism.”

Şenay’s study of “trans-Kemalism,” which she defines as “the cross border work of the Turkish state in its ceaseless secular-nationalist (Turkist) project of reconfiguring its ‘civil society’ abroad” (p. 105), is an original contribution to existing studies of Turkish nationalism and secularism, as well as literature on transnational mobilization of migrant communities and transnational citizenship.

The originality of the book for the students of Turkish nationalism/secularism stems first from its methodology. The pioneering examples of ethnographic research on (neo-)Kemalism were given by Yael Navaro-Yashin (Faces of the State: Secularism and Public Life in Turkey, 2002) and Esra Özyürek (Nostalgia for the Modern: State Secularism and Everyday Politics in Turkey, 2006). Şenay extends the scope of this literature to the diasporic sphere and analyzes the transnational mechanisms, organizations and institutions that enable the reproduction and refashioning of Kemalism in the context of the increasing dominance of political Islam in both Turkey and among diaspora Turks.

Şenay’s study also enriches the existing literature on the Turkish diaspora. She analyzes how transnational networks can serve to strengthen migrants’ ties with the Turkish state. She explores those migrants who identify with the Turkish state and become the latter’s “voluntary ambassadors” in the name Kemalist nationalism and secularism within Australian civil society. This transplanted “civil” Kemalism is being reproduced, as shown by Şenay, through two mechanisms:  1) The organizations and activities of Turkish consular bodies, the mosques of the Directorate of Religious Affairs (Diyanet) and the Turkish Ministry of Culture and Tourism; 2) Migrants’ own political activism which attempts to compensate for the perceived insufficiency of the current Turkish state’s intervention in inculcating Turkish national identity in second- and third-generation migrants. Şenay demonstrates that both mechanisms of this Kemalist regeneration are ironically embedded in and made possible by the institutional opportunities provided by Australia’s multicultural policies, which can also undermine Kemalism’s monopolistic claims on Turkish national identity.

The book starts by introducing the reader to the historical, economic and political background of the Turkish emigration to Australia, which began with an agreement between the two governments in 1967. The second chapter traces the divided political panorama of the Turkish migrants who either “came as workers and stayed as citizens” between 1967 and 1974, or came to Australia under family reunion, humanitarian (political refugees) or skilled migration programs after 1974. Şenay’s archival research and interviews with politically active migrants reveal that the migrants’ political orientation was divided along left and right in the 1970s and 1980s, and along Kemalists and “Islamists” after the 1990s, reflecting the transnational impact of the political climate in Turkey.

The following chapters (3 and 4) analyze the processes through which the Turkish official ideology of Kemalism has been reconstructed by transnational political institutions of the Turkish state, namely the Turkish consular bodies, the Diyanet and the Ministry of Culture. These official bodies efficiently mobilize Turkish-speaking migrants along Kemalist nationalism through “the creation of a Turkish political lobby; the dissemination of information via electronic sources and the print-media; the circulation of complaint letters and petitions against ‘anti-Turkish’ (i.e. anti-Kemalist) initiatives; the holding of national day celebrations, commemorations, talks, award ceremonies and other events; the promotion of ‘Turkish culture’; the provision of school textbooks published by the Turkish Ministry of education; and the initiation of fund-raising campaigns by various state institutions” (p. 105).

Şenay argues that the growing possibilities provided by communication technology make this long-distance mobilization easier by extending the borders of the imagined national community beyond Turkey’s boundaries. In her words, “[d]espite claims that the nation-state is losing its sovereignty in the face of the processes of transnationalism, the state continues to claim and manage its populations abroad by utilizing what transnational processes offer them” (p. 113). Şenay emphasizes that state rituals, such as national day celebrations and commemorative events involving migrant school children, are crucial in the reproduction of national/Kemalist identity among Australian Turks. She argues that the aim of  consular activities such as cultural festivals, which are organized with the support of the multiculturalist policies of the Australian state, is to instill national memory and national pride among migrant Turks.

Şenay also examines how the particularities of Turkish secularism further enhance the nationalization of migrants in Australia. Since the early year of the Turkish Republic, the official Kemalist secularism has been based on the control and instrumentalization of Islam. Şenay’s work attests that this secularism has a transnational dimension because of the extensive bureaucratic apparatus of the Diyanet, which has branches not only all over Europe but also in Australia. The mosque organizations of the Diyanet are critical channels for the promotion of “Turkish Islam as moderate, civilized, enlightened Islam” and political control of migrants (p. 133). Şenay illustrates how the Turkish state attempts to “secularize Islam and to nationalize Turkish worshippers” and “monopolize Turkish Islam abroad for cross-cultural interaction and communication,” while simultaneously using “the militaristic discourse of martyrdom” through organizations such as funeral prayers for martyred soldiers in Turkey (p. 142-144). This chapter offers a valuable account of the transnational dimension of Kemalist secularism. However, one cannot help wondering whether the Diyanet’s attempt to monopolize Turkish Islam is received and/or contested by separate and probably rival Islamic organizations. For instance, it would be intriguing to explore whether the Turkish state’s “appropriation and domestication of Sufi ideas and practices” in the case of the “use of Rumi’s poetry and life as ‘atavist promotion’ to promote an enlightened image of Turkish Islam” (p. 151-2) was approved or problematized by other Islamic communities.

Drawing on the work of the anthropologist Michael Herzfeld, the subsequent chapter of the book (Chapters 5) investigates “the engagement between the state and the practices of citizens so as to unpack how these two categories relate to each other” (p. 161). This Foucauldian approach, which emphasizes the discursive reproduction of the state in the daily lives of citizens, was previously used by Navaro-Yashin and Özyürek to examine the “civil” neo-Kemalism of the 1990s that  arose in Turkey as a response to the political success of Islamism. Şenay illustrates the same processes of refashioning state ideology within civil society and the private lives of citizens among the Turkish diaspora in Australia. As in Turkey, Kemalists in Australia “want more from the (Turkish) state” (p. 173). They work voluntarily for the state, despite the belief that the state is subverted by Islamists. For instance, they refashion state rituals as voluntary commemorative events, as in the case of organized visits to the Atatürk Monument in Canberra on November 10, the day of Atatürk’s death (mistakenly written as October 10[1]) (p. 178-9).

The 6th chapter of the book focuses on the specific performance of a music ensemble of which the author is a member. Here, Şenay argues that both the representation of Turkish music and Istanbul as a multi-cultural city during this performance reflect the appropriation of the Kemalist “politics of aesthetics” in Australia. The fact that the members of the music ensemble act as voluntary cultural attachés claiming to represent the correct Turkish culture to foreign eyes is seen in this chapter as another example of migrants’ identification with the Turkish state, and hence their “trans-Kemalism.”

Şenay asserts that the Australian state is neutral towards the migrants’ conflicting claims concerning the Turkish state, whether Kemalist or non-Kemalist. As a matter of fact, the last chapter of the book analyzes the interaction between trans-Kemalism and the Australian state’s multicultural policy vis-à-vis different ethnic and religious minorities. “Gratitude” and “mistrust” summarizes the immigrants’ attitude towards multiculturalism, as it provides legitimate and legal channels of mobilization not only for the regeneration of Kemalist national identity in Australia, but also for the political activism of rival ethnic and religious communities, such as Kurds, Alevis, Armenians and Suryanis.

However, as I noted above, the book does not offer any account from other Turkish-speaking migrant groups, such as members of mosque organizations alternative to the Diyanet-authorized ones. The same is also true of Kurds or other ethnic groups who might be Turkish citizens but not actors of trans-Kemalism. Hence, the reader remains curious about the applicability of this concept to the diasporic context in question: Is “trans-Kemalism” really the defining ideology for some practices analyzed by the author, such as the protest against the commemoration of the Suryani genocide or funeral ceremonies for martyred Turkish soldiers at Diyanet mosques? Or, are these instances of identification with the Turkish state equally shared by other discourses of Turkish nationalism? How are these practices received by non-Kemalist but equally nationalist and/or Islamist migrants? Can the Kemalist trait of identification with or “seeing for the state” be considered a common denominator among polarized Turkish-speaking communities in Australia? The book inspires but does not address these questions.

In short, Beyond Turkey's Borders, as an insightful exploration of Kemalism in a “transnational field,” encourages further inquiry of, in the author’s words, “the intricate interaction that take place between all migratory actors” in Australia (p. 278).

[1] Another detail to correct perhaps in later editions of the book is the confusion about the poem of Nazım Hikmet (Memleketim), which is mistaken with the lyrics of a popular Turkish song (Bir Başkadır Benim Memleketim). Fikret Şeneş, who adapted this from a traditional Yiddish song Rabbi Elimelekh (probably through its French version –Aveugle, by M. Mathieu), was also the writer of the Turkish lyrics (p. 214-5). 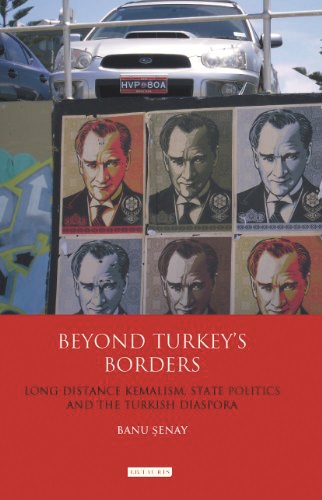