While chapter one provides essential context by looking at state formation and economic development and argues that this broader framework determines the type of entrepreneurial development possible, chapter two uses the metaphor of a Mikado game to explain social stratification in the Soviet period and beyond. She shows how the allocation of resources has entailed a careful balancing act by elites that is easily unseated when any single player steps out of line. It is a system that is dominated by oligarchs.

Chapter three focuses on “the characteristics of entrepreneurs and business sectors based on survey evidence”, such as by age, gender, and ethnicity as well as by their perceptions. Özcan refers to the book’s appendix in which she has compiled an extensive survey of personal attributes, business paths, political opinions and market perceptions. She explains how Central Asian entrepreneurship arose in three waves, “the first occurred before independence, the second was led by early movers and the third is characterised by the younger generation” (p. 67). She notes an interesting point about Kazakhstan—although Kazakhs occupy the ethnic majority, almost one third of entrepreneurs are Russians. Also, the overwhelming majority of entrepreneurs do not trust the justice system and try to avoid the courts in addressing their business and personal problems.

Chapter four looks at the growing importance of bazaars and compares three large bazaars: Dordoi, Baraholka and Siyob. Most residents of Central Asian cities rely on bazaars for their daily consumption. Markets can date from nomadic times, such as the Mal Bazaar, an animal market in Karakol. She reveals underlying battles over revenues, taxes and rents. She emphasizes how bazaars need to be analyzed as modern institutions and examines “the interplay of these stakeholders constitute a microcosm of Central Asian market building” (p. 97).

In chapter five, “The Gendered Economy”, Özcan explores how a growing number of businesses are owned and managed by women. Slightly more than half of entrepreneurs interviewed in Kazakhstan and Kyrgyzstan were female. Small traders have been disproportionately women, and the shuttle trade has played an important role in their development.

In chapter six Özcan describes various forms through which state and private interests overlap under different regimes. In Uzbekistan, top-down control has been enacted by the state, co-opting chambers and associations, and has become a major tool for the allocation of resources. Especially in Kazakhstan new business associations and groupings based on solidarity networks and collective support have emerged. Simultaneously and elsewhere ad hoc groups and self-governing syndicates have emerged as alternative institutions for appropriation and protection from state and non-state actors in the market.

Chapter seven traces the role of international actors in enterprise, its limited success, and with a particular focus on the Kyrgyz Republic. It details the general disillusionment that followed Western involvement and advice in a country that at the beginning wholeheartedly embraced reform. The interestingly entitled chapter eight, “Entrepreneurs as moral men”, is an important and yet often overlooked dimension to entrepreneurialism and employs secondary literature, together with literature, poetry and dictums. Özcan analyzes how Central Asian entrepreneurs make a connection between core moralities in business and everyday duties and the greater good.

After the Soviet collapse discussions of class lost prominence. Özcan rectifies this through this book by tackling head on the definition of what constitutes the middle stratum of entrepreneurs, and what social roles they play and perform. She usefully differentiates between different generations of entrepreneurs, for example the less numerous post-Soviet-generation entrepreneurs. “What defines the entrepreneurial middle class is its relative access to opportunities and resources and the ability of its members to utilise them” (p. 228). Entrepreneurs are concentrated in sectors such as services and consumer-goods retailing where there are low-entry barriers. They do not appear to have a defining and binding ideology, and “they mainly utilise their instinct for survival combined with a deep cynicism towards justice and the rule of law” (p. 230).

The relationship between the state and regime is a pivotal one in Central Asia, and the differences in that relationship are central to our understandings of these countries’ different trajectories. The ruling elites in Turkmenistan and Uzbekistan have managed to keep a tight grip on the economy and so they have determined the functioning and state ownership of major economic sectors, strongly reducing the chances for independent economic elites to emerge. Kazakhstan’s strategy of authoritarianism was different. Its political elite sought to keep control over the country’s key economic elites. Thus what the regime termed strategic industries were kept under its tight control, but with the added development that many of these elites were receiving Western training in managing market economies. As a result, at the same time a small- and medium-sized entrepreneurial sector was given sufficient room to develop. State building in the Kyrgyz Republic and Tajikistan took on quite a different constellation where the state in both countries was too weak to sustain a corrupt regime. In both cases groups outside the state were able to amass considerable power and influence to the point of sometimes either challenging or complementing the goods provided by the central state.

Özcan traces such developments well in her final chapter where she differentiates between the “neo-Soviet consolidation (most clearly observed in Turkmenistan and Uzbekistan), authoritarian developmentalism (in Kazakhstan) and chaotic authoritarianism (in Kyrgyzstan and Tajikistan)” (p. 221). In sum, Özcan manages to deftly combine theory and evidence with detailed case studies. She succeeds in providing the macro framework to the micro discussions and also importantly incorporates multiple dimensions to the being of the entrepreneur—from identity to morality to perception as well as a survey of real socio-economic and socio-legal frameworks.

The book serves a number of audiences—it provides excellent reading for scholars of Central Asian area studies, development studies, and non-Western studies of class and social change. It will also provide a useful book for undergraduate and postgraduate students alike, as well as serving as a helpful introduction to practitioners in the region. 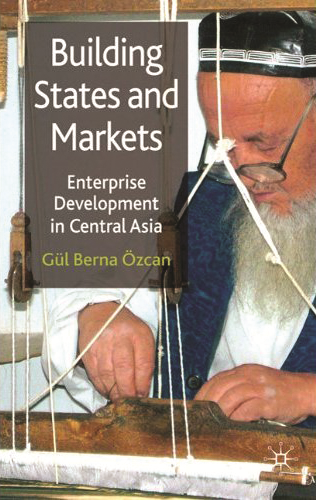